Beaches Kaila Yu Do You Enjoy Visiting Hawaii? You Should Pay a Fee
Home  >  News   >   Disney World Isn’t All About the Rides: 10 Tips for Finding and Meeting the Characters

Disney World Isn’t All About the Rides: 10 Tips for Finding and Meeting the Characters 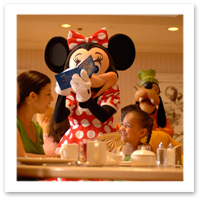 First-time visitors to Disney World often make the mistake of thinking it’s all about the rides. But parents constantly write to me about something else: how absolutely blown away their kids were at the chance to meet Mickey, Minnie, and the rest of the Disney characters. Here’s how to maximize your character experience.

1. Make reservations. The character meals are a low-stress way to meet several characters at once. They’re extremely popular, though, so reserve at least 90 days in advance by calling 407-WDW-DINE or visiting their Dining and Reservations page. Dining with Cinderella in her castle is the hottest ticket in town; you’ll need to call 180 days in advance to book this ultimate princess experience.

2. Princesses can be found outside the castle. If you can’t get into Cinderella’s castle, don’t despair. There are princesses aplenty at the Restaurant Akerhaus at Epcot’s Norway pavilion.

3. Get an autograph book. Not only is this a fun and reasonably priced souvenir, but asking for an autograph gives kids (especially very young ones) something to do when they meet the character and thus breaks the ice.

4. Schedule a character breakfast for the day you’re leaving Disney World. If you choose a meal inside one of the Disney resorts you won’t have to pay to get into the theme parks. Plus, by this time in the vacation kids have seen the characters plenty of times in parades and shows, and even the most nervous toddler is usually relaxed enough to give Mickey a big hug. Most important of all, a character meal is a great send-off for the trip home.

5. Let the kids get into costume, too. No matter when or where you do your character meal, it’s a great time for kids who have them to wear character costumes. What could be cuter than a miniature Snow White meeting the real thing? Aspiring princesses should make an appointment at Bibbidi Bobbidi Boutique, where dress-up packages including hair and make-up begin at $50. Meanwhile, boys (or swashbuckling girls) can get outfitted at the Pirate League with hooks, hats, and eye patches, and have their faces painted.

7. Look for chances to actually interact with the characters. Good examples include the fun Jedi Training Academy outside Star Tours in Hollywood Studios, Storytime with Belle in Fantasyland in the Magic Kingdom, and the aforementioned Pirate Recruiting Session in Adventureland in the Magic Kingdom. While other experiences involve simply getting an autograph, picture and hug from the character, these more interactive experiences allow kids to don costumes, engage in swordplay, and act out roles from their favorite stories.

8. Don’t get so involved with the hoopla that you take your eyes off your children. More kids get lost at character meeting spots than in any other section of the theme parks, mostly because they get excited and start dashing from one character to another and parents are so preoccupied with getting the perfect photo that all of a sudden they realize little Jeremy has slipped out of sight.

9. Know the character hot spots. There are several key places you can find the characters on an ongoing basis.

10. Take special care with toddlers. The characters are big and intimidating, so toddlers often get nervous when they first see them. In order to ease them in, remember: