News Dan Stables True or False: There Are Wild Predatory Cats Roaming England’s Countryside
NewsMayan Ruins to See Before the “End of the World”

Mayan Ruins to See Before the “End of the World”

Bored with the soothing sound of waves licking the white shores of your Central American beach destination? Looking for a way to feel like you earned that tiny umbrella in your drink? An adventure you can brag about to your friends? Having spent six years researching the Mayan Riviera, here’s my suggestion: time travel.

You don’t even need a flux capacitor. Just push yourself up off the sand, towel off, get in an air-conditioned taxi, and propel yourself thousands of years back through the history of the land. You’re headed for the ruins of the ancient Maya—the most advanced civilization in the Pre-Columbian new world. Their spectacular temples and palaces are often as little as an hour’s drive away from your hotel or hacienda. For one afternoon you get a thousand years of history. Seems like a fair trade to me. 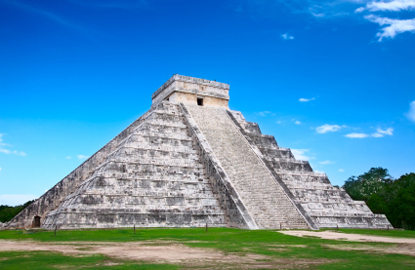 Whether you’re relaxing or spring-breaking, Cancun is a great starting point for your personal quantum leap. The amazing ruins of Chichén Itzá are just a two-and-a-half hour ride southwest, and regular buses taxi between resorts and the ruins complete with well-informed tour guides and other sun block-lathered adventurers. Five years ago, Chichén Itzá was named one of the New Seven Wonders of the World, and when you arrive, you’ll come face-to-face with one of the most iconic images in western civilization: the Temple of Kukulkan and its ninety-one sacred steps on each side up to the summit. Circle it. Imagine Maya kings standing at the top and offer them the respect they deserve. Then, your homage paid, walk the rest of the grounds: don’t miss the ball court where the ancients played their signature combination of soccer and basketball, and the Cenote of Sacrifice, a large sinkhole where you can probably guess what happened. 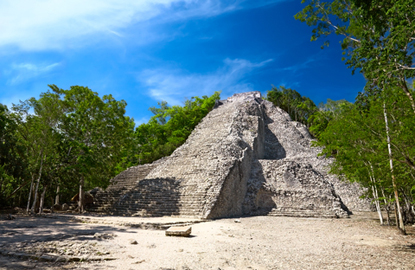 If you want to jump through a different wormhole once you’ve done Chichén Itzá, hop on another bus from Cancun another day and head to Cobá. This ancient site (also just 2 1/2 hours away) is still not fully excavated, offering a much more jungly and much less populated adventure. Here you’ll find the pyramid Nohoch Mul, highest on the Yucatán Peninsula. Climb all 120 steps to view the sprawling jungle, and maybe even catch a glimpse of some other ruins poking out above the treetops. If you’re itching for even more exploring, head for the incredible ruins of Uxmal, one of the best restored and maintained sites in the Yucatan. It features the unique architecture of the Pyramid of the Magician, a 115-ft. structure with rounded corners and angles steeper than you’ve ever seen before. There, you can also visit the Diviner Pyramid or the Governor’s Palace, where you’ll find a giant mosaic of over a hundred stone masks bordered on either side with tall columns of the same—ancient faces coming to life in the weathered stone. Whisper the names of everyone in your vacation party who didn’t have the adventurousness to come, and laugh at them with the Maya royals. 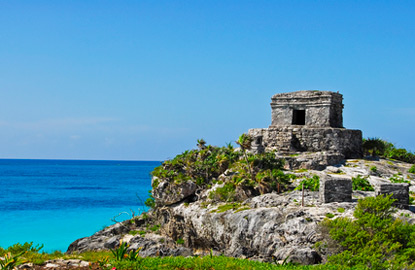 But never fear—even those of you too attached to the sea to leave it for the jungle can still see some spectacular ruins. Just take a short drive south to Tulum, the only Maya site that sits directly on the Caribbean, where kings and clergy once vacationed just like you. The amazing views alone make Tulum worth the trip, and before you know it you’ll be wishing your hotel was situated inside one of the incredible temples and palaces overlooking the sea. (Room service would be unlikely). Or, if your vacation takes you to the popular island of Cozumel, the ruins of San Gervasio, offer an incredible natural setting dedicated to the Maya goddess Ix Chel. It was tradition for ancient Maya women to travel to San Gervasio at least once in their lifetime to make an offering to the goddess of midwifery, fertility, medicine, and weaving. You won’t have to make an offering to delight in the mystique of the beautiful site.

Finally, think about it this way: if the Maya were right and the world is ending on December 21, 2012, you only have about four months left to be the adventurous person you keep telling yourself you are. Only four more months to show your friends how much more interesting your life is than theirs via Facebook photos. So get in your time machine (taxi), hurdle back a thousand years to a Maya city, explore the incredible ruins, and work off a few of those strawberry daiquiris. (You can have another when you get back, I promise.)

Dustin Thomason attended Harvard University, where he studied anthropology and medicine. He won the Hoopes Prize for undergraduate writing, and graduated in 1998. Thomason also received his M.D. and MBA from Columbia University in 2003. His book 12.21 was released earlier this month.