News Larry Bleiberg You Can Finally Look Inside This Stunning D.C. Landmark. But Only for Another 25 Days
Home  >  News   >   Marseille Sights 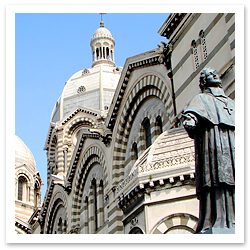 Centre de la Vieille Charité
The impressively large Center of the Old Charity encompasses a magnificent Baroque chapel with an oval-shaped dome in addition to several museums, including the Museum of Mediterranean Archaeology, where you can ogle fascinating artifacts from ancient Greece—mummified people, cats, and flowers, among other things.

Le Panier
The oldest quarter of Marseilles is also the city’s most vibrant and cosmopolitan neighborhood. Steeped in history, this maze of high-shuttered houses looms over narrow cobbled streets, pastel-painted shops, chic boutiques and stylish restaurants. It’s not always so charming at night, however.

Marché aux Poissons
A lively fish market begins each morning in Vieux Port. Line up with the ladies of the house to purchase fresh monkfish, scorpion fish, grondin, and a hundred other fishy delights.

Musée d’Histoire de Marseille
Learn about the city through the many artifacts unearthed here—battle gear, weapons, and most impressively, the hull of a Greek battle ship from the 4th century BC.

Abbaye-St-Victor
A gorgeously preserved church in Vieux Port. Chunks of the original 4th-century structure remain in the crypt, which is partially buried under the new church’s medieval structure. Ancient sarcophogi can be found throughout the crypt, and upstairs is the tomb of St-Victor, who met an unpleasant end, probably at the hand of the Romans.

Les Arcenaulx
This stone armory, built by Louis XIV, now houses an array of tony shops and restaurants. The bookstore here has a large collection of publications on Marseille, and a boutique sells high-end cooking utensils. The book-lined restaurant serves up delicious local fare.

Château d’If
This wildly romantic island fortress, its thick towers and crenellated walls looming in the sea spray just off Marseille’s coast, is the stuff of history—and legend. It was here that Alexandre Dumas locked up his most famous character, the Count of Monte Cristo. The boat ride (from the Quai des Belges) and the views from the broad terrace alone are worth the trip.

Notre-Dame-de-la-Garde
Deeply loved by locals and visitors alike, this neo-Byzantine church, erected in 1853, is one of the enduring emblems of Marseille. The esplanade around the basilica offers breathtaking views of the city. (photo, top)