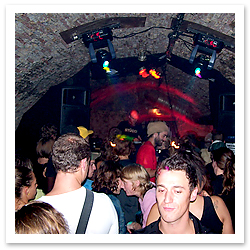 Marseille is a big city, at least by French standards. As such, a night on the town here can be as fun and stimulating as anywhere in this pleasure-seeking country. Arm yourself with Marseille Poche, a glossy monthly to find out what’s going on in bars, cafes, museums, and concert halls. Below, we’ve listed a few of our favorite venues.

Le Trolleybus (24 quai de Rive Neuve, Bompard) is the hottest disco in town, and the starting point of Marseille nightlife for wilder denizens. The club’s selling point are its different dance “grottos” offering techno, salsa, and funk. The crowd ranges from bankers to rappers in track suits and gold jewelry. (photo, right)

Wine sippers love La Part des Anges (33 rue Saint, Vieux Port) because the bartenders pour wines from all over France (you can order wine by the glass or by bottle). Open until 2 a.m., it attracts an eclectic crowd, from hip, arty, and trendy to overdressed women and men in bad suits.

If jazz and blues are your thing, check out L’Intermediare (63 pl. Jean Jaurés, La Canebière). The longstanding and popular Espace Julien (39 cours Julien, Notre Dame du Mont) also has blues, but you can also hear pop and rock. For rap and techno, make a beeline to L’Affranchi (212 bd. de St-Marcel, La Canebière).

Bach, Beethoven, and Brahms (or maybe Debussy, Poulenc, and Milhaud) hold sway in the concert hall at Abbaye St-Victor, which has a regular concert series for small musical ensembles. Opera and orchestral performances are on tap at Opèra Municipal (2 rue Moliére).