News Apeksha Bhateja Have $340,000 and Want to Vacation in a Survivalist's Paradise?
NewsMarrakech’s Most Over-the-Top Hotels

When it comes to hotels, Marrakech is known to deliver some over-the-top, lavish accommodations. While there are more than 400 hotels in the city, only a handful pander to the well-heeled traveler who can expect opulent details, extravagant amenities, and elaborate decor. We rounded up the most posh palaces, hottest hotels, and richest riads in Morocco’s "Jewel of the South." 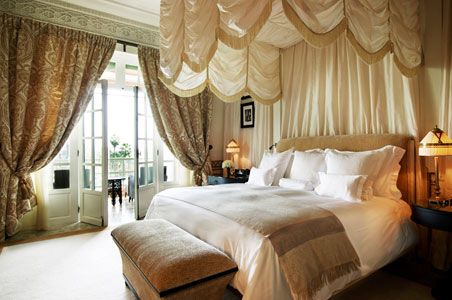 After three years of renovation, La Mamounia’s reopening in 2009 was worth the wait. The redesign by notable designer Jacques Garcia gave a more contemporary approach to this Arabic-Andalucian palace that dates back to 1923. Expect marble pillars, hand-painted wooden doors, and a signature scent created by world-renown perfumer Olivia Giacobetti. The fashionable hotel is so opulent with myriad amenities, it’s an attraction in itself, thanks to fine design work, a sprawling, 20-acre garden, 27,000-square-foot spa, a casino, and four on-site restaurants, in addition to Churchill bar, named after the famous author who loved it here. There are 210 rooms, most with breathtaking, unobstructed views of the Andes. 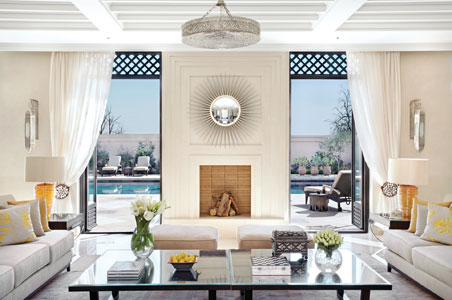 The Four Seasons Marrakech easily edged its way into the top ranks of the city’s hotels when it opened last November. The 141-room property features Berber-inspired architecture with whimsical stairwells and lush gardens. The rooms are cozy and the bathrooms are huge. There’s ancient olive trees and tons of ambience amidst the 40 acres. The spa, Solano restaurant, and laid-back pool (with separate kid’s pool) ensure the "urban resort" is fit for families, and visitors will find some of the finest service in Morocco.

Don’t Miss: Zest at Bleu d’Orange, the rooftop bar that opened just this past summer and delivers unforgettable sunsets. 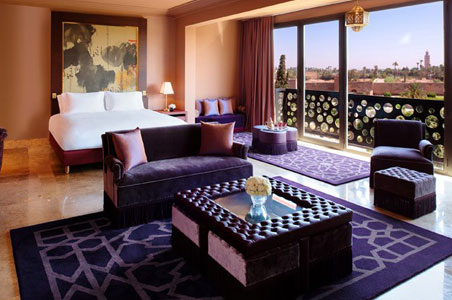 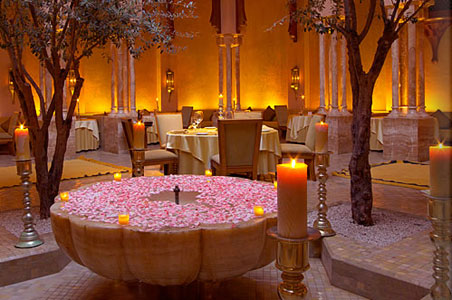 Stargazing, unashamed pampering and total, utter privacy are the highlights at Amanjena, just outside the city’s bustle. The 39-villa resort is opulent and romantic with glazed tiles, stone courtyards, fountains filled with pink rose petals, olive trees, and a central reflection pool that feels like it stretches for eternity. The accommodations have high, dome-shaped ceilings and private garden courtyards, several equipped with their own plunge pool. The 100-foot heated pool is a must, as well as the spa and Thai restaurant. 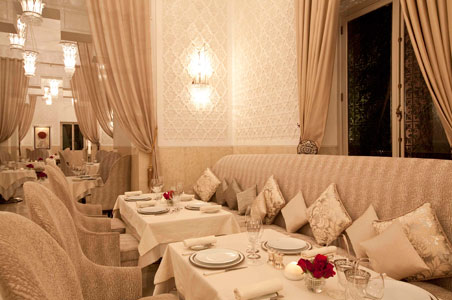 Built by the king of Morocco himself and opened in 2010, Royal Mansour touts itself as a "seven-star" hotel and, quite frankly, we won’t argue. The lavish hotel lives up to its cache with 53 individually designed one-, two-, and three-bedroom riads (traditional Moroccan home) that come equipped with 24-hour butler service. Just to give you an idea of the hotel’s "over-the-top" theme: the one bedroom spans three floors and includes a courtyard, living room, large bedroom with bathtub and separate rain shower, and a rooftop terrace with private plunge pool and views of the mountains. The entire property evokes the idea of a typical medina, though not all medinas have as bling-ed out spas.