Beaches Kaila Yu Do You Enjoy Visiting Hawaii? You Should Pay a Fee
Home  >  News   >   Where to Be in 30 Days: Experience an Authentic Cajun Mardi Gras

Where to Be in 30 Days: Experience an Authentic Cajun Mardi Gras 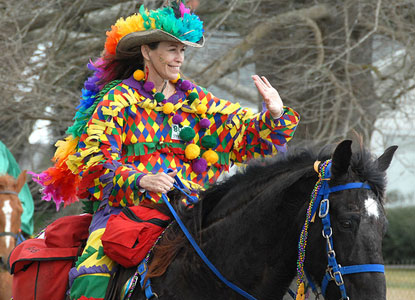 There’s no denying that the over-the-top Mardi Gras festivities in New Orleans are something everyone should experience at least once. But if you’re looking to celebrate in a way that doesn’t include as much booze, beads, and another “b” word, head to Eunice, Louisiana’s prairie Cajun capital, 170 miles west of the Big Easy.

Eunice, population 12,000, still celebrates Mardi Gras the traditional Cajun way, as it has since 1896. Instead of elaborate costumes, the goal is to make the most using the least. Simple costumes are made of cloth scraps, dunce caps, and painted screen masks, and are meant to both conceal identity and parody authorities. At 8 a.m. on Mardi Gras day, the Tuesday before Ash Wednesday, 2,000 people set off—some on horseback, others on flatbed trailers—for the 13 mile courir de Mardi Gras (“running the Mardi Gras”), stopping at farms along the way to “beg” for gumbo ingredients. “Cinq-sous pour les Mardi Gras!” beggars call out. If their cries are answered with sausage, rice, or other ingredients, revelers thank the farm owners with a dance. The ultimate prize is a live chicken; participants chase it in celebration. Once the journey is complete, and the symbolic gumbo ingredients are in hand, the troop heads back to town for a cookout, live music, and dancing with 50,000 of their closest friends.

Festivities carry on all weekend through Mardi Gras day, and include street dances and a traditional old time hog butchering.

Families that don’t want to be in chaotic New Orleans; people who have been there, done that, and want to try a new celebration destination.

Be sure to dress up in traditional garb. You can make your own costume from scrubs and ripped cloth, or visit one of the costume shops in town.

It’s a three-hour drive west from New Orleans, or a 40-minute drive northwest from Lafayette.

Other Things to Do While You’re There