News Apeksha Bhateja What Are the Chances You'll Get Monkeypox at a Hotel?
NewsPeru: Off-the-Beaten-Path in Mancora

While in Peru, the default route is usually hopping a flight to Cusco to tackle the Macchu Picchu trail before, at best, adding dip into Lima for some fine dining and a gallery or two. But for an itinerary less traveled, head north from Lima along the Pan-American Highway and keep going until you nearly reach Ecuador. There, you’ll find the relatively balmy waters of Mancora, a seaside town with a sizzling reputation among South American vacationers for all-day beaching and all-night partying. Think Thailand’s Koh Samui and Koh Phangan before they were fully developed. Get in while the waves are less crowded than other surfing hot spots and the prices are relatively affordable. Here are a few tips to get you started… 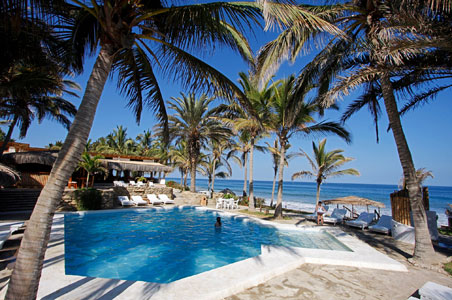 Unless you’re looking for Full Moon parties, for which it’s probably better to stay in Mancora proper, head just 10 minutes south on the motorized tuk-tuk taxi (about 5 soles each way) to Mancora Chico, or more commonly: Las Pocitas. This gem of a beach is actually connected to Mancora’s own stretch of sand, so you could walk along the ocean during the day to town. But Las Pocitas is where the bulk of nice accommodations are, including the outstanding Hotel Las Pocitas which has been in operation for 20-plus years. If you’re expecting luxury, Mancora is probably not for you—unless you’re willing to commit to renting a multi-room beachfront villa. Instead, Hotel Las Pocitas offers all beachfront but rustic rooms —it literally feels like you’re sleeping on the beach with the waves crashing as soundtrack—and a friendly staff. Rooms are well-maintained and spotless with rates during high season going between $80-$125.

Then, Hotel DCO Suite & Spa is also a tourist favorite with more modern finishes. The downside? The beachfront is dotted with rocks—Las Pocitas was named for the small pools that form behind these rocks with tidal changes, making it a great beach for little ones—and the location is far enough down the sandy stretch that it feels a bit remote. 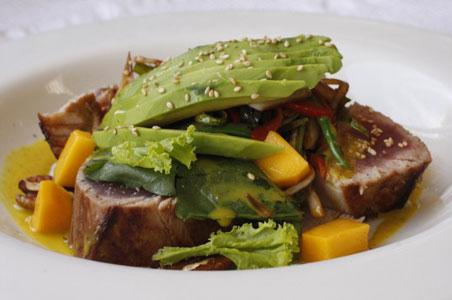 Mancora revolves around the trinity of beach, food, and drink. For the daytime, stroll along Las Pocitas beach, perhaps grabbing lunch at Cucin Amore before heading to Mancora to rent a surfboard at Victor’s (along the waterfront, board rental is surprisingly cheap at about $4 for two hours) to catch a late afternoon into early evening ride. Check out the tidal charts beforehand, as high tide is best; during low tide you’ll likely run your board into sand or coral. The waves are long, smooth, and rolling in Mancora, making it a great spot for beginners too.

Lessons are available through Victor’s, which conveniently houses a bustling bar where you can grab an ice cold Pilsen or Cusquena (the local brews) after hitting the waves. The Pisco sours, however, are better at neighboring Las Canitas, which also makes a mean fried fish, dished up with fries or steamed yucca. If you’re hankering for late night activity, Victor’s also pumps music and serves up drinks into the wee hours. Otherwise, there are plenty of promoters handing out flyers during the day for one-off parties in town.

For a more refined option, head to La Sirena de Juan along the main drag, where the food and plating are sophisticated and creative. On a recent trip, the cabrito, or baby goat, over risotto was outstanding. It’s also one of the few places in town to grab a decent glass of wine. 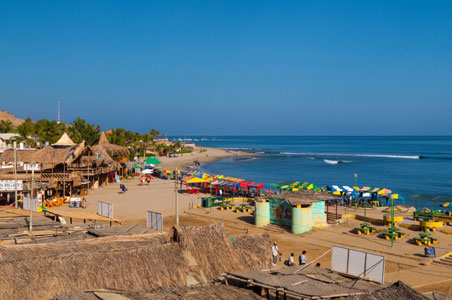 With a brief rainy season (usually from March through April) and generally delightful temperatures to boot (in the low 80s with plenty of ocean breezes), the climate can’t be beat. High season is from mid-December to March, with New Year’s Eve rocking the town and party buses crowding the streets. The hotels along Las Pocitas beach offer a calmer option for the holiday, such as prix fixe dinners (77 soles per person including champagne toast at Hotel Las Pocitas) capped off by fireworks on the beach (many travelers bring their own).

Peruvian Airlines offer daily flights to Piura from Lima, which is about two and a half to three hours away from Mancora by car. Many hotels will help arrange transfer (about $98 each way). Or if you land early enough, you can seek out a group van or bus option. The ride from Tumbes airport is about half that time.