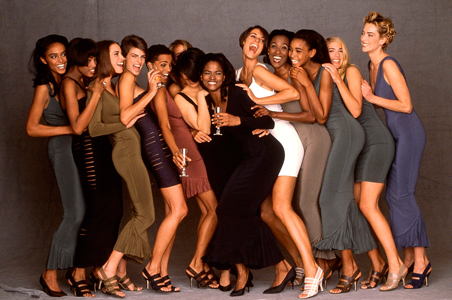 A masterpiece of staging, the 70 dresses on display seem to hover in space, buoyed by transparent dress forms cut precisely to the lines of each garment and underscoring the sculptural quality of the dresses.

The show is ideal for a rare close-up glimpse of the exquisite artistry, ethereal lightness, and supreme beauty of the dresses, yet Alaïa’s stance over the years has been to remain resolutely behind the scenes, allowing his creations to speak for themselves, "I prefer people to notice the woman and not her clothes."

While the designer has been dressing women since the 60’s (Greta Garbo was among his early clients), it was the supermodels of the 80s—Linda Evangelista, Stephanie Seymour, Naomi Campbell—and iconic performers, like Tina Turner and Grace Jones, who brought him to wider acclaim, wearing his creations with an athletic grace, almost like a second skin. 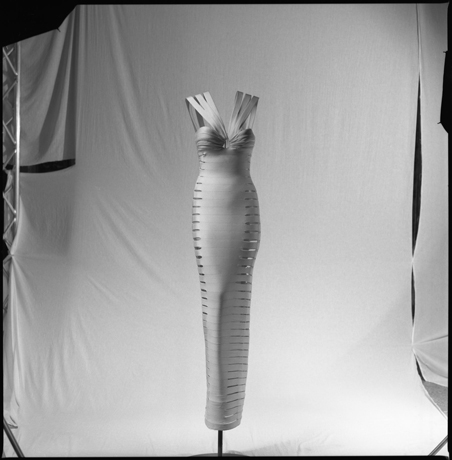 Since his heyday in the 80s, the designer’s virtuosity with fabrics and technical mastery has never ceased to dazzle the fashion world and each collection remains hugely popular with aficionados and influential among younger designers.

There’s not one wallflower in the Galliera show. Among the standouts: a crimson gown, once worn by Rihanna, exhibited dramatically on its own in an alcove, a coppery belted gown in the hooded style made iconic by Grace Jones, a stark white banded column dress with peek-a-boo slits influenced, according to the designer, by Egyptian mummies, and, across the street at the Musée d’Art Moderne (where the show continues), a magnificent jacket whose back is fashioned from a glossy black crocodile skin.

The dresses on display retrace Alaïa’s long career and provide a welcome review of the master’s oeuvre, while also certifying the creative vision of Olivier Saillard, museum director and curator of the exhibition.

Though the Galliera has been closed for four years, the collection has not been collecting dust, nor has Saillard been idle. His gorgeous exhibition of the couturier Madame Grès at the off-the-radar MusÃ©e Bourdelle in 2011 was widely hailed as a fashion revelation. In 2012, his show of Comme des Garçons designer Rei Kawakubo’s all-white collection from that year—the first to be consecrated by the designer—was contrasted with a black-dominated exhibition of startlingly modern pieces from couturier Cristobal Balenciaga at a funky space on an industrial stretch of the Seine. This year, the busy Saillard curated an ambitious survey of Paris haute couture at Paris’s city hall along with fashion-centric performances involving pieces from the museum collection with the actress Tilda Swinton. 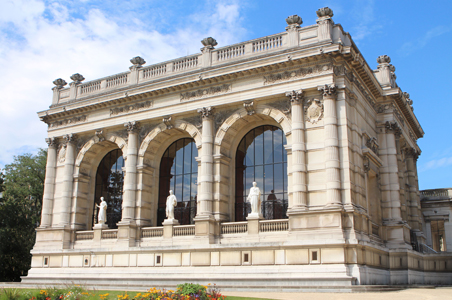 Although the museum will not present a permanent exhibit, there’s much planned for its spiffed-up halls. Alaïa (closing January 26), will be followed by a show of iconic fashion of the 50s, and the extramural shows continue with an exhibition at the Musée Carnavalet (the Museum of the City of Paris), titled The Life of a Wardrobe: A Parisian Woman’s life in Fashion, From the Belle Époque to the 1930s (Oct 17-March 16, 2014).

Located in an elegant park among trees and flower gardens in an area rich with museums—the Palais de Tokyo and the Musée d’Art Moderne are across the way and the Musée Guimet just up the street—the Galliera is a superb venue for spending a deeply Parisian hour or two.