Travel Scams Reported Around the Country

By Erica Duecy and Rachel Klein

If it sounds too good to be true, it probably is. That’s the message Fodors.com members and other would-be travelers around the nation are telling one another after receiving fake free or discounted airline ticket offers that range from deceptive marketing ploys to outright scams. 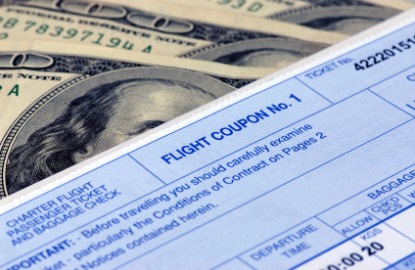 Dozens of Fodors.com members have posted their accounts of receiving mail claiming they’ve won free airline tickets or a $1,400 travel voucher from a company called U.S. Airlines, apparently posing as US Airways.

"Received a very official-looking document (tear off sides) marked "travel check" for $1400 from U.S. Airlines," wrote Fodors.com member claymama. "The ‘check’ has a return address of ‘Travel Union, Phoenix, AZ 85006’…Marked ‘This is not a timeshare or land sales offer.’"

However, Fodors.com members who contacted the company said they were asked to attend a 90-minute presentation for “travel membership” packages or vacation clubs, with sign-up fees upwards of $7,000, before they would be eligible to receive the tickets. Fodors.com editors tried repeatedly to contact representatives at the company in question, but calls were not returned.

The actual airline, US Airways, said they were aware of the problem and have responded to concerned individuals on a case-by-case basis.

"It seems like every couple of years a new company tries to do this," said US Airways spokeswoman Valerie Wunder. "When we get calls, we try to tell people it’s not us." 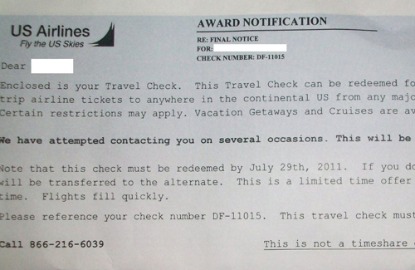 News agencies from Arizona to Colorado have posted warnings on their sites to alert consumers to these bait-and-switch ploys.

In yet another reported bait-and-switch tactic, Facebook users have been asked to share links with their friends to get free Southwest Airlines tickets. People who share the links are then directed to a website to purchase goods instead of getting free tickets.

Have you received free travel offers like these? If so, tell us your story on Fodors.com.