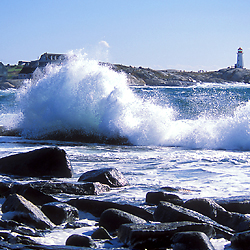 Why: Mahone Bay is both a postcard-perfect maritime town and an ideal base for exploring the stretch of coastline known as the South Shore. A 15-minute drive south lands you in the historic port town of Lunenburg. Head 45 minutes in the other direction (towards Halifax) and you’ll reach the desolate headland of Peggy’s Cove, home to Canada’s most photographed lighthouse.

Worth Doing: Rent a kayak from a local outfitter and explore the secret caves of the pirates who once thrived here, or paddle around the bay’s pine tree-dotted islands, including Oak Island, where the notorious Captain Kidd reputedly stashed a treasure.

Where to Eat: The area as a whole is known for mom-and-pop eateries where you can chow down on homemade chowder or order a heaping plate of mussels. But there’s also a sprinkling of quirky cafes. For something a little more upscale, try the Innlet Cafe at 249 Edgewater Street. In summer, communal meals hosted by churches and community centers (think lobster boils, planked salmon suppers or strawberry socials) are another good bet. Tables are long, prices are low, and the ambience is unforgettable.

Where to Stay: The Manse Country Inn, nestled into the hillside above the harbor. The inn has four guest rooms, all of which are crisp and casual (as opposed to cutesy) and are priced under $135 U.S. per night based on double occupancy. Given a choice, ask for Carriage House loft. If you’d like to pretend you actually live in Mahone Bay, consider renting a cottage from Cottage Connection instead.

When to Go: Unlike many maritime resort towns, Mahone Bay stays “open” year-round. The optimal time to visit, however, is early August when the town celebrates its seafaring heritage with the annual Classic Boat Festival. For a lower tourist-to-local ratio, come in early October when fall colors are at their peak.

How to Get There: From Halifax, drive about 50 minutes west on Highway 103, then take Exit 10 into Mahone Bay.