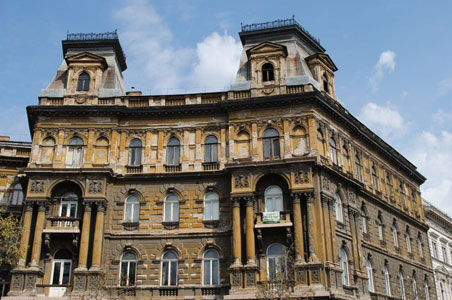 Very much a central European city, Budapest has elements of both east and west. The wide avenues and dilapidated but beautiful buildings hint at the former grandeur of the Austro-Hungarian empire and it’s easy to squint your eyes and pretend that you’re in that era. Divided by the Danube into Buda and Pest, both sides have much to offer tourists, though most of the famous landmarks are on the Pest side.

Check into the Intercontinental, which is right on the Danube and situated perfectly for two days of exploring both sides of the city. Grab your bathing suit and walk three minutes to Vörösmarty tér to catch line 1 of the metro, which has been in operation since 1896 and is a World Heritage Site itself. Be sure to buy a ticket and validate it on the train—although it seems like it’s based on the honor system, they do random checks often and the fines are quite heavy. 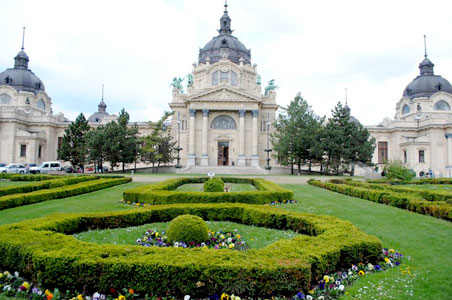 There is no better way to beat jetlag than by going to the baths, and Budapest is famous for them. Get off the train at Széchenyi-fürdo and make a bee-line for the gorgeous neo-Baroque building that houses the Széchenyi thermal baths. Built in 1913, you’ll feel like you’re entering a palace rather than a bathhouse. You can rent towels and a small changing cabin where you can leave your things while you enjoy three exterior pools (which are hot in winter and cold in summer) and 20 interior pools with varying temperatures and mineral contents.

Once you’re fully relaxed, exit the spa and find yourself in the middle of the beautiful City Park. Walk around Vajdahunyad Castle, which looks ancient but was actually only constructed in 1896 for the World Expo.

Continue on to Heroes Square; if you’re looking to get your art fix, now is the time. On one side of the square is the Museum of Fine Arts with the largest foreign art collection in the country, while across the way is Kuntsthalle (the Hall of art), the biggest exhibition space in Hungary, which features regularly rotating modern art exhibits.

When you’re museum-ed out, stroll along the lovely, tree-lined Andrassy Avenue, which has lots more sites and plenty of good shopping (alternately, you could always hop back on the metro to the hotel—line 1 runs along this street). Refuel with excellent coffee and a bite at EcoCafé. A few doors down pass the House of Terror, a striking museum dedicated to the victims of the Nazi and Communist regimes in Hungary.

Continue on to the Hungarian State Opera House, which was built in the Neo-Rennaissance style in 1884. See if you can get last minute tickets to a performance, catch a guided tour of the interior, or simply admire the exquisite sculptures and frescoes on the outside. 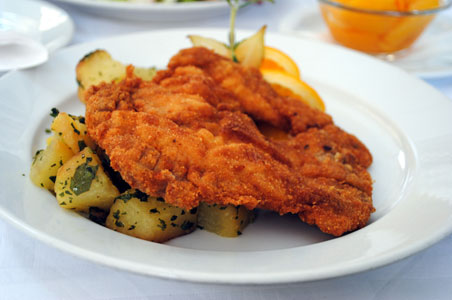 Just beyond the end of Andrassy, stop to admire St. Stephen’s Basilica, which commemorates the first Christian king of Hungary. If you’ve got any steam left, head up to the circular balcony of the church for an unparalleled sunset view of the city. Finally, end your day just around the corner with a delectable modern Hungarian dinner at Café Kor (Circle Café), a local favorite. 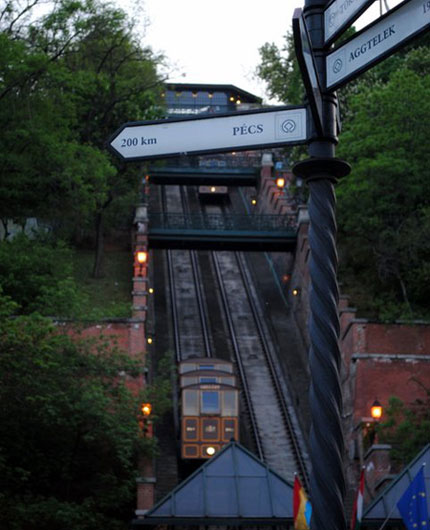 Start your second day with a stroll across Danube via the Chain Bridge, which was the first permanent bridge connecting Pest and Buda, built in the 19th century. Once on the other side, hop on the steep Castle Hill Funicular to Buda Castle, where you can easily spend an entire day exploring the massive 13th century palace complex. Instead of getting bogged down in visiting every museum and site, just enjoy strolling along the ancient cobblestoned streets. If you have the time and inclination, check out Trinity Square, Matthias Church (Mátyás templom), and Fishermen’s Bastion (Halászbástya).

Head back down to the water and hop on the historic yellow streetcar at Clark Ádám tér (grab the number 19 or 41) and get off at Szent Gellért tér. If you want to visit another grandiose bathhouse, the Gellert Spa and Bath is right there. Otherwise, walk back across the Danube on the Liberty Bridge (Szabadság híd). 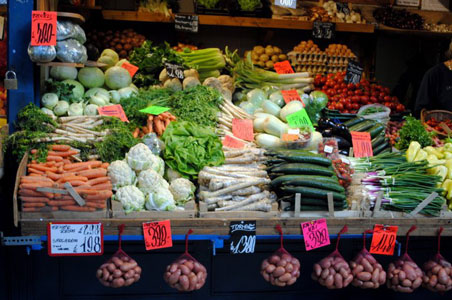 Just one block after the bridge is the Great Market Hall, Budapest’s largest indoor market and a must visit for food lovers. Stock up on paprika and other local specialties, before grabbing a bite at one of the many food stalls that serve Hungarian fare on the second level.

Catch the 47 or 49 streetcar at FÅ‘vám tér (heading away from the water) and get off at Astoria M to visit The Great Synagogue (also known as the Dohány Street or Tabakgasse Synagogue), the largest functioning synagogue in Europe and the second largest in the world (it seats 3,000). Built in 1853 in Neo-Moorish style, it’s worth simply admiring from the outside but there is also a museum and tours available of the interior.

Walk about 10 minutes to get to Gerbeaud Café, a fine example of a traditional Hungarian coffeehouse and cake shop. The upscale café looks much as you imagine it did when it first opened in 1858, with rich tapestries and rugs, rococo plasterwork, and lots of dark wood. Of course the cakes and treats are at the center of the experience and are not to be missed. Then, try to get a dinner reservation at their Michelin-starred restaurant Onyx.

Finally, take a walk to check out the magnificent and colossal Hungarian Parliament Building, which is 268 meters long and covers 18,000 square meters of surface area. Guided tours are available, but when you’re short on time just viewing the exterior is enough. Enjoy a sunset stroll back to the hotel and bid farewell to the former capital of the Austro-Hungarian Empire.

Katherine Martinelli is a freelance food and travel writer and photographer based in New York and Israel. In addition to contributing to publications around the world, Katherine also writes about her adventures on her website. Follow her on Twitter @martinellieats.