Botticelli had it all wrong. The shallow scalloped shell in his famous painting, The Birth of Venus, does not befit the goddess that stands upon it. No, Venus deserves something grander, a cavernous white shell with a roof like the waves and dramatic arched windows that look out on the foamy blue sea from which she sprung. She deserves Perla. 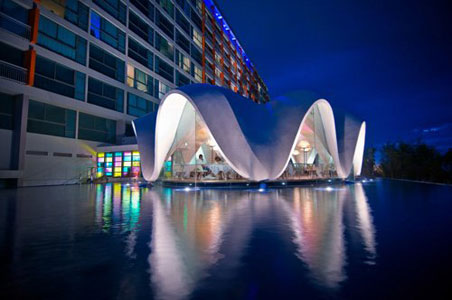 San Juan, Puerto Rico’s Perla is a restaurant second, an architectural icon first. Created by Mario Salvadori, it floats in a pond off the back of La Concha ("the shell") resort, a design icon in its own right, hailed as the paradigm of the Tropical Modernism movement when it opened in 1958. Fifty-five years later, Perla still feels entirely original, a circular, two-tiered dining room with a curving wooden catwalk along the windows, plush aqua carpets and tall, palm-like lampposts crowned with upturned petals of peach Murano glass. Though the locals’ like to dine late, I went at dusk, when the views of the wind-whipped Caribbean complement chef Dayn Smith’s coconut curry shrimp and roasted stuffed chicken.

International Hospitality Enterprise, the hotel’s owner, sunk $220 million into a head-to-toe renovation of La Concha in 2010, injecting the resort with a dose of modern panache that hums in an open-air lobby you might mistake for the Condado’s strip’s chicest lounge at the after-dinner hour. High heels pour in from Ashford Avenue, clickety-clacking across the marble as sunburned pharmaceutical reps collect their jaws from the floor. 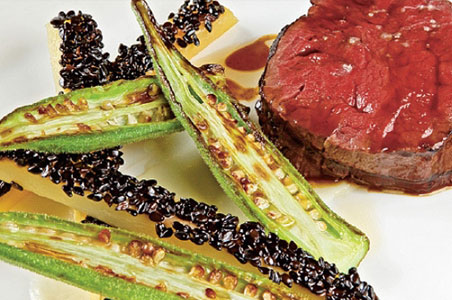 Puerto Rico is a world leader for pharma, biotech, and medical manufacturing, a designed upshot of now-expired tax incentives enacted in the 1960s and ’70s. The budding industry lured many of the island’s rural farmers away from agriculture, but 50 years later, the trend is beginning to reverse as young, mainland-savvy chefs are seeking out local, organic growers. Next door to La Concha at chichi 1919 in the Condado Vanderbilt, a majestic, 94-year-old Spanish Revival mansion in the throes of a luxurious renovation—hotel rooms open the end of the year—chef Juan Jose Cuevas, a Puerto Rico native who cooked under Dan Barber and Tracy Jardin, serves exemplary cuisine you would have never found in San Juan two years ago. Across the lagoon in the blue-collar Santurce neighborhood, young gun Jose Enrique piles up likewise noteworthy dishes at his eponymous, insider-y restaurant (no website) near the Placita, the lively plaza home to a farmers’ market where you can buy green and red Puerto Rican aji (chilies) and garlic to make your own bottle of the island’s vinegar-based "pique" hot sauce. 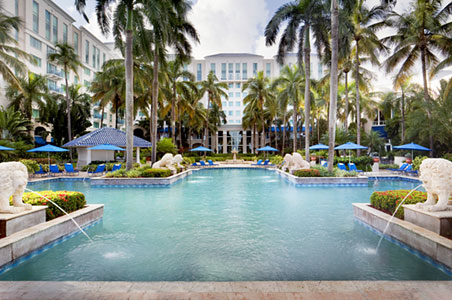 Back on Condado, the South Beach of San Juan, luxury retailers like Louis Vuitton and Gucci on Ashford Avenue sandwich the Zen Spa, a soothing second-story retreat where a therapist massaged cooling cucumber and aloe vera gels into my sunburn. For something a bit more posh, you could always book an appointment at the sandcastle-like Ritz-Carlton in the Isla Verde district. Breeze out of the spa like you own the joint, and the accommodating beach attendants will be none the wiser when you request your topaz-padded lounger place by the waterline.

La Concha’s beach, a crescent of powdery sand flanked by a long stone jetty jutting into the sea, stretches back to the Ventana al Mar park, a weaving of green lawn and stone patio studded with sculptures and fountains that hosts free jazz concerts on the last Sunday of every month. I could hear the happy music floating up to my airy quarters in La Concha’s $100 million Suite Tower after a long, relaxing day on that beach. Powder-blue, dolphin-gray, white and birch crated a calm palette in my 580-square-foot haven. A short hall flanked by floor-to-ceiling closets and the huge bathroom with a frosted-glass shower connected the sleek living room and kitchenette with the bedroom and balcony facing the sea.

Eating out in San Juan can be a pricey proposition, so the kitchen is an especially welcome amenity. After shopping for provisions like fresh guacamole and chimichurri-marinated chicken at La Hacienda Meat Center, an upscale grocery hidden inside a tangerine villa in the Miramar neighborhood, we ate dinner a casa on our last night in Puerto Rico. Dining on the balcony to a backdrop of churning ocean and live jazz below, it was our own little Perla, with the part of Venus played by my wife.