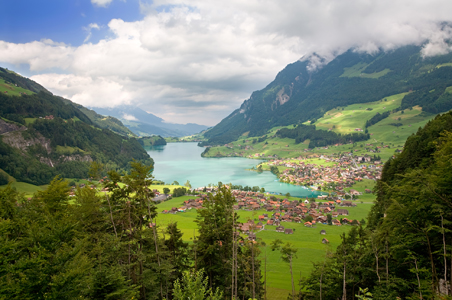 Thick fondue, rolling green hills, well-preserved medieval towns—the canton of Fribourg in eastern Switzerland has it all. Often bypassed by visitors eager to trek through the majestic Alps further south, Fribourg abounds with lush Alpine valleys and rich pastureland dotted with black-and-white cows, whose jangling bells strapped around their necks ring out across the countryside. On the linguistic boundary where French and German comingle, this canton makes for a culturally and gastronomically rich pit stop on any traveler’s journey across the country. 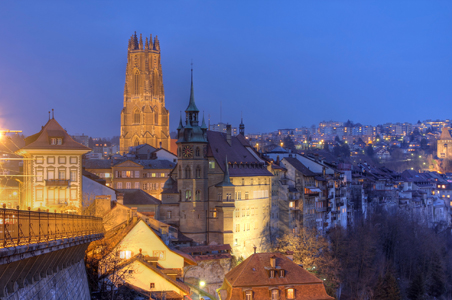 Day One: Tour of Fribourg

A mere 90 minutes journey by train from Zurich, Fribourg is the perfect base for exploring the region. A buzzing, bilingual university town with immaculately preserved medieval architecture, Fribourg has more than enough attractions to merit a day or two of exploration.

It’s best to start with a visit to the imposing St. Nicholas Cathedral. Here, you can climb 368 winding steps to the top of the turreted tower and enjoy panoramic views of the town and the larger Sarine River valley. After coming down, you should make your way to the nearby Espace Jean Tinguely-Niki de Saint Phalle, one of the leading modern art museums in Switzerland. Born in Fribourg in 1925, sculptor Jean Tinguely was a pioneer of the kinetic art movement, and this museum includes several monumental examples of his automated sculptures. Simply tap on the start button and his sculptures whir to life: cow skulls spin in place, rusty wheels turn endlessly, and a carnival hammer bops a stuffed rabbit on the head. It’s absurd, edifying fun.

But perhaps the most enjoyable way to experience Fribourg is simply by wandering through its cobblestone streets, narrow passageways, and rambling stairways. The lower part of the city holds a gorgeous array of homes that hail from as far back as the 11th century. The Sarine River cuts through Fribourg, and there are several bridges that offer sweeping views of the townscape. Don’t miss the Bern Bridge, a gorgeous wooden covered bridge that overflows with colorful flowers in the summer.

Once you’ve tired of walking, pop into the Café du Midi for some superb fondue. The typical canton fondue consists of two native cheeses melted together: Gruyère and Vacherin Fribourgeois. You won’t be able to get enough of it. 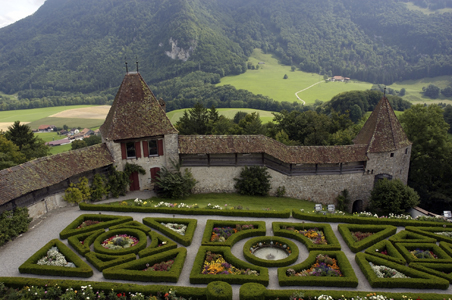 Internationally known as the production center for the hard yellow cheese that shares its name, Gruyères is the highlight of the canton. Perched atop a craggy mount amid the surrounding Alpine foothills, this seductive medieval town feels lost in time—a well-preserved castle village lined with cobbled streets and charming châteaus.

On the way to Gruyères from Fribourg, you should make two stops to pay homage to the foods Switzerland is most known for: chocolate and cheese. In the nearby town of Broc, chocolate aficionados can visit the factory of the country’s oldest chocolatier: Maison Cailler. On an elaborate tour that takes visitors all the way back to the food’s Aztec origins, you’ll learn all about the invention of milk chocolate in Switzerland in the 19th century. Best of all, the tour concludes with unlimited free samples of Maison Cailler’s delicious products.

Just outside of Gruyères is the Maison du Gruyère, an active dairy that takes you through the elaborate cheese-making process. No visit is complete without ample fresh samples of the aromatic cheese in the attached gift shop and café.

Afterward, take a 15-minute hike up to the storybook village of Gruyères. Enclosed in fortified walls from which you can glimpse the upper Sarine River valley, Gruyères is compact and car-free, offering rich history and beauty at every turn. Crowning the town is a majestic 13th-century castle that teems with striking artwork, well-preserved furniture, and an ambitious fresco cycle that depicts the history of the region. Before leaving, be sure to try the town’s justly famous dessert: meringue topped with crème-double de la Gruyère, a decadent, extra-thick cream that melts in your mouth. 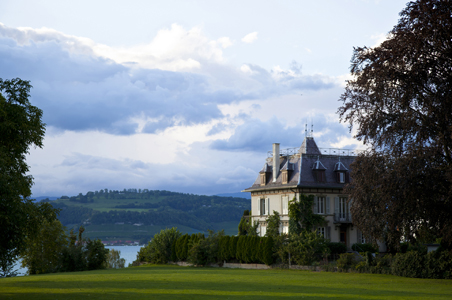 Day Three: Relaxing on Land and Lake in Murten

On your final day in the canton, head to the historic town of Murten, only 11 miles to the north of Fribourg. This village was the site of a pivotal 15th-century battle in which the Swiss Confederacy emerged victorious. Fortress-like walls still encircle the town, and visitors can climb up the ramparts and gaze out at the red-roofed houses below. There are several placards along the rampart walk that explain the history of the event.

Afterward, stroll to the charming medieval town center and stop into the various food and crafts shops along the main street. Roving bands of yodelers and alpenhorn players in traditional garb often give impromptu concerts in this area.

Finish the day with a relaxing boat cruise on picturesque Lake Murten. You can find many operators who offer excursions along the waterfront, just outside town. Many cruises offer Swiss wine onboard and, if the weather cooperates, stunning shots of the rural landscapes. For dinner, opt for one last pan of piping-hot fondue. After all, when in the canton of Fribourg . . . .