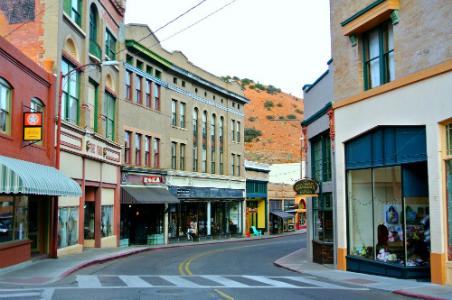 The town is well poised as a base for further exploration of its surrounding Cochise County, which is most surprisingly the setting of a booming viticultural region anchored in Willcox, where some ten wineries have cropped up over the last ten years. Plus, Wild West lore and tales of cowboys and Indians endure regionally: Stroll the streets of neighboring and notorious Tombstone (site of the legendary gunfight at the O.K. Corral), or peruse Native American art and artifacts at the Amerind Museum, not far from the Chiricahua Mountains, where Cochise, Geronimo, and other legendary Apache warriors once roamed. 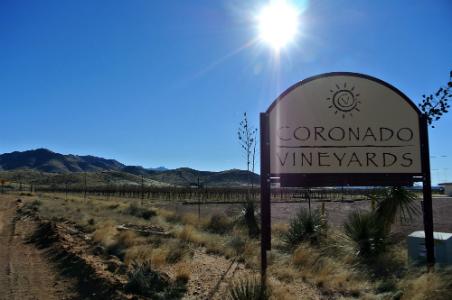 From Tucson, it's about an hour's drive southeast to the Amerind Museum in Dragoon, scenically set within a Spanish colonial-style hacienda amidst the giant boulders of Texas Canyon. Inside, an impressive anthropological and archaeological collection spans artwork and artifacts from Native American cultures hailing from Alaska to Argentina.

Continue east for about twenty-five minutes to Willcox, the hub of the wine-growing resurgence that's swept this slice of Arizona over the last decade. Pop in for a tasting at one of Willcox Wine Country's finest, Coronado Vineyards, where high-desert elevations topping 4,000 feet nurture a nice mix of varietals, including Syrah, Cabernet Sauvignon, and Riesling. Pair a pour with a light tapas lunch on the patio, fronting the vineyards-fringed Dos Cabezas Mountains.

Before leaving town, stop by downtown Willcox, a small historic district that recalls the town's nineteenth-century whistle-stop railroad roots, with historic buildings that have since been converted into shops and tasting rooms.

It's another sixty miles southwest to Bisbee. Upon arrival, check in to the Hotel San Ramón, well situated in the heart of town in a 1902 building. It's been a long day, so, luckily, dinner's waiting just downstairs at Santiago's, which serves authentic Sonoran-style Mexican. Try the fish tacos paired with a margarita, and round it off by the melt-in-your-mouth flan.

This old mining town was once famous (or, perhaps, infamous) as the “liveliest spot between El Paso and San Francisco,” with nearly fifty rowdy saloons, just as many brothels, and gambling establishments aplenty, all tucked into the Brewery Gulch section of town (along Brewery Avenue and OK Street today). While that bustling scene is long gone, the nightlife here is still pretty darn good. 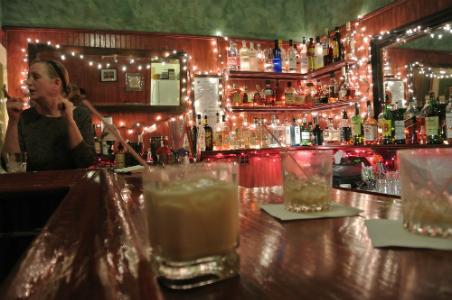 In the spirit of Bisbee tradition, a top spot for carousing is the Stock Exchange Saloon, which is set within the century-old stock exchange building (the stock board is still affixed to the wall) and serves craft beers and small-batch bourbons. Across the street with regular live music, the boisterous St. Elmo's Bar, opened in 1902, is the oldest continuously operating bar in Arizona. Hit up the Old Bisbee Brewing Company for local microbrews, like the historic Copper City Ale, with a recipe carried over from Bisbee's early mining days. Squeeze in for the perfect nightcap at the pocketsize Room 4 Bar at the Silver King Hotel, billed as the smallest bar in Arizona. 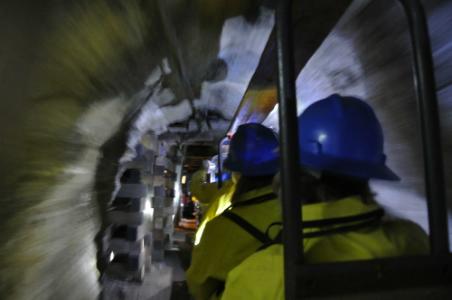 Be sure to dig in on the once thriving town's rich mining history. Formerly known as “the Queen of the Copper Camps,” Bisbee was, at its turn-of-the-twentieth-century heyday, the largest city between St. Louis and San Francisco; mining activity dwindled off here by the 1970s. On the eastern edge of town, fuel up on a miners-worthy, Brewery Gulch-hangover-curing brunch at the buzzing Bisbee Breakfast Club for heaping plates of hotcakes, hash browns, and chili-spiced egg dishes.

Sneak a peek at the neighboring overlook of the Lavender Pit, a decommissioned open-pit copper mine that's marked today by the gaping gash left in the earth's crust—it's a jarring testament to mining's destructive environmental aftermath.

Grab a hardhat, headlamp, and yellow slicker and sign up for the hour-long Queen Mine Tour to ride a historic mine train 1,500 feet underground through a subterranean shaft of the now-inactive Queen Mine, once a booming copper mine. Guides, all experienced miners, recount the history, technique, and dangers of mining along the way.

Back outside, the miners may be gone—replaced by artists, hippies, retirees, and a colorful palette of quirky local characters—but the remnants of the former mining boomtown remain via the well-preserved and artfully reclaimed Victorian-style architecture that is largely clustered along Main Street. Above Main Street, rambling narrow streets connected by long, steep staircases connect residences that cling to the edges of the red-hued walls of Tombstone Canyon.

Spend some time perusing the creative shops and dozens of galleries at whim. Try Sam Poe Gallery, filled with the colorful paintings and sculptures of husband-and-wife team Sam Woolcott and Poe Dismuke, or the nonprofit Belleza Gallery, where proceeds for artwork and furniture sold go toward supporting a local women's shelter.

Pop into Main Street's Flying Leap Tasting Room to sample regional wines from Flying Leap Vineyards, based out of nearby Elgin, Arizona.

Though the artists' colony reinvention spared Bisbee ghost town status, it didn’t spare it its ghosts. Sign up for the 90-minute Old Bisbee Ghost Tour, which leads guests on a ghost tale-filled walk through streets, stairwells, alleyways, and purportedly haunted establishments. 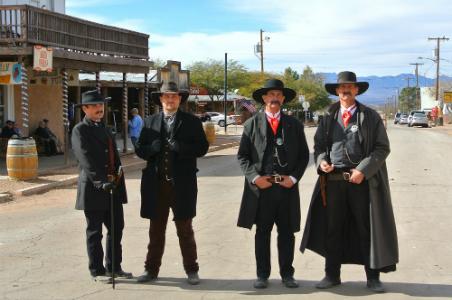 Fuel up at the Bisbee Coffee Company, which serves fresh pastries and coffee roasted on site.

En route back to Tucson, stop off at legendary silver mining boomtown and Hollywood-hyped Tombstone. “The town too tough to die” is best known for Wyatt Earp, Doc Holliday, and the rest of the gang and their storied 1881 gunfight at the O.K. Corral. Despite Tombstone's obvious tourist-trap trimmings (gun-slinging cowboy actors, strips of souvenir shops, etc.), the kitschy spirit of the Wild West here is all in good fun.

Reenactments of the shootout are held several times a day on the original gunfight site at the O.K. Corral and Tombstone Historama, where you can cheer on the good guys and bear witness to that fateful day on October 26, 1881. Complementary exhibitions include Historama, a Vincent Price-narrated multimedia presentation depicting Tombstone history, and historic images by photographer C.S. Fly.

Wander down the main stretch, Allen Street, lined with touristy shops and restaurants, to the 1881 Bird Cage Theater, a once round-the-clock establishment known for its sordid entertainment (including a brothel, gambling den, and music hall) and rough-and-tumble clientele (with more than 120 bullet holes in the walls, bar, and ceilings to prove it).

Refuel at one of Tombstone's bustling saloons—Big Nose Kate's (named for Doc Holliday's girlfriend, a town prostitute) is a favorite, complete with costumed saloon girls, live music on weekends, and heaping burgers and sandwiches.

Where to Stay: Bisbee is home to an eclectic mix of innovative inns and unique B&Bs, most of which come tucked into the historic Victorians in the old part of town. The Hotel San Ramón features six homey rooms with thoughtful in-room extras like fresh-baked cookies and coffee packets from the Bisbee Coffee Company. For the full-fledged only-in-Bisbee experience, consider bunking down outside of the historic district at the seasonal Shady Dell, where ten vintage mid-century aluminum trailers offer generous servings of kitsch, with period memorabilia and units touting themes like the “Polynesian Palace.”

When to Go: Thanks to Bisbee's higher elevation (the nation's southernmost mile–high city), temps are mild year-round (averaging highs of about 90° in July and 60° in January), making it one of the coolest places—figuratively and literally—in southern Arizona. In the warmer months, you'll find plenty of urban refugees from Phoenix and Tucson who pour in to beat the heat.

How to Get There: Most visitors fly into Tucson and rent a car, but more flight options are available through Phoenix, situated about 200 miles northwest of town.