News Apeksha Bhateja What Are the Chances You'll Get Monkeypox at a Hotel?
NewsBest New Luxe London Hotels 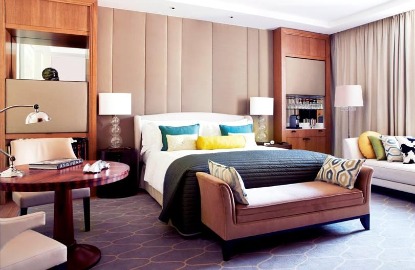 London’s set to play host to the summer Olympics, which has spurred one fine hotel boom. The list of newbies goes on and on (we count 19 openings in time for the games, and a few after-the-fact stragglers like the Edition London and Andre Balazs’ latest UK venture), but which are the top luxury contenders worth the hullaballoo? Here’s the lowdown on London’s new best of breed.

Just across the street from its sister and flagship property, the Dorchester, 45 Park Lane opened its doors in Mayfair this past September. The Theirry Despont-designed property features 45 rooms and suites done up in clubby, Art Deco style—all with Hyde Park views; a handsome library and private media room; and an outpost of Wolfgang Puck’s restaurant Cut. Guests staying here also have access to the Dorchester’s spa and priority reservations to its restaurants. Fun fact: Brad and Angelina stayed here while in town filming Brad’s movie World War Z. Rates from $699/night; www.45parklane.com.

The ninth hotel from the Corinthia marque opened last spring in an 1885 Victorian building in Whitehall Place. Some 300 million pounds has restored the old beauty to its former opulence, with an extra dose of glitz. Public spaces are airy and sophisticated; the showpiece in the lobby is its glass-domed ceiling and Baccarat chandelier. The first-ever Harrods hotel shop sits across from reception, while the four-story spa complex Espa Life comes with a sexy thermal pool, glass sauna with its own flickering fire and mood music, mosaic steam room, and splashy spa lounge. The 294 sizable rooms, including 43 suites, are amongst the largest in London, and feature oak paneling and varying color schemes, Juliet balconies, and baths with built-in TVs; many suites tout sweeping river views. One of our favorite perks at the Corinthia: The 24-hour check-in/checkout policy, meaning arrive whenever and your room will be ready, sleep in on checkout day and depart when you feel like it. Rates from $454/night; www.corinthia.com.

The new St. Pancras London, part of Marriott’s Renaissance chain, occupies the former Midland Grand Hotel (which operated from 1873–1935). The stunning Gothic landmark practically sits atop the Kings Cross tube station and the St. Pancras International Rail Station, and will once again serve as a convenient, not to mention grand, hub for those traveling by rail, especially since Eurostar and other high-speed trains will be shuttling visitors to the Olympic Stadium this summer. Clever transformations include the former covered taxi way-cum-lobby and Gilbert Scott’s original ticket office turned restaurant and bar. The 207 rooms in the new Barlow House annex are a bit ho-hum; lacking the grandiose Victorian feel exemplified in the rest of the building. Request one of the 38 Chamber rooms or suites in the original building for high ceilings, intricate moldings, tall Gothic windows, and period furnishings. Rates start from $337/night; www.marriott.com.

For up-to-the-minute hotel and restaurant recommendations, plus the best planning advice, check out our London Travel Guide.