Finding it hard to get into the holiday spirit? A sense of the Blah Humbugs getting to you? Feel even Santa is slowing down? Ho-ho-hold on a sec—we might have just the cure for you! No other place revs up for Christmas like London, that Dickens of a city that gave us A Christmas Carol and has long offered a 1,001 ways to lift the lowest spirits. Since Christmas is best seen through the eyes of a child, we’ve put together a list of places and events that will have the kid in you skipping with delight all the way to the airport. 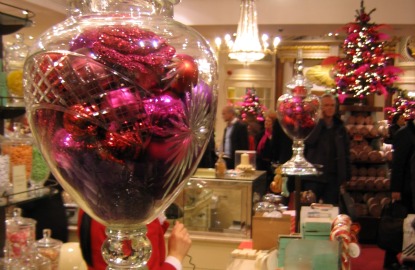 No need to wait up for Santa on Christmas Eve—his London calendar is crammed with engagements during the entire month, including appearances at Santa’s Grotto (Americans call it Santa’s Workshop), and at Harrods and Selfridges, two of London’s top emporiums. If you want to meet Santa and his reindeer, make tracks for the London Zoo where, from December 17 to December 24, you’ll find Rudolph, Dancer, Prancer, Blitzen, and the rest of the team in their special lodge, when not accompanying Santa on their daily constitutional.

More Details: Another Clause for celebration can be found at Kew Gardens where, alongside greenhouses bursting with tropical landscapes, there’s a woodland version of Santa’s Grotto, with a carousel and rides on miniature vintage cars from December 10 to December 23. And for adults, there’s a Winter Evergreen Walk offered daily through the end of December. You can also catch Father Christmas in a Victorian-age den at the Museum of London through January 1, 2012. Tweet us with all your Santa sightings!

One of England’s most beloved traditions is afternoon tea, a ritual now making a fashionable comeback, especially—and most genteelly—in London. This is a delightful way to spend the greater part of an afternoon, just as in the 19th century, albeit with some 21st-century modifications and changes of venue. Check out Fortnum & Mason (pictured above), which has made room for some new "stars."

More Details: Where to go for the best teas in town? A bastion of luxe, Claridge’s is offering such tasty holiday temptations as gingerbread soufflé to go with your Champagne tea (the fare extraordinaire is created by none other than Gordon Ramsay, renowned celebrity chef); The Berkeley cleverly offers a "Prét-à-Portea"; while The Savoy hotel’s elegant tea service is further enhanced by the legendary High Edwardian décor of the surroundings.

Trafalgar Square—the official center of London—and its atmosphere of celebration is particularly enhanced most nights through December 22 by carolers who gather to sing seasonal songs under the square’s famous Norwegian spruce (Norway’s annual gift to thank the British for harboring its Royal Family during World War II).

More Details: For more holiday musical offerings, check the concert calendar at St. Paul’s Cathedral, Westminster Abbey, and at St. Martin-in-the-Fields. On December 28, the latter offers "Come and Sing: World’s Greatest Christmas Choruses, with the Choral Scholars of St. Martin’s." Or, or on December 23 and December 24, head to Royal Albert Hall at Kensington Gore, for "Carols by Candlelight."

The Ghost of Dickens Past

At times, even Santa is upstaged by London’s most famous author, Charles Dickens. The year 2012 will mark the 200th anniversary of Dickens’ birth (a special tribute is the ongoing Museum of London’s "Dickens and London" show, which opened December 9). This month, the Charles Dickens Museum, the house where the author wrote Oliver Twist and Nicholas Nickleby, is dressed in its holiday best, thanks to "A Very Dickensian Christmas." The author himself would be pleased as punch to learn that this museum will remain open on Christmas Eve, Christmas Day, and Boxing Day (when other London museums are closed).

More Details: The £15 admission to "A Very Dickensian Christmas" (open through December) includes a glass of glug (mulled wine), based on a Dickensian recipe, a slice of mince pie, and a special gift pack. Amble along on the museum’s "A Christmas Carol Walk," Fridays through December 23.

Present Not Accounted For?

If your Santa sack still has room and time is running out, you can fill it up in a jiffy at the shops on Regent Street, the Fifth Avenue of London. Try Edwardian-vintage Liberty (its spectacular black-and-white Tudor Revival building is a top source for Art Nouveau-style datebooks or Arts and Crafts-motif fabrics), or traditional favorites like Penhaligon’s, the go-to place for perfume, cologne, aftershave, and a variety of luxe-scented trifles.

For a change of pace, only a block away is Newburgh Street, the center of ultra-hip London. Local merchants oblige with that punk-meets-Brideshead Revisted look, and possibly the perfect gift for someone on the "naughty" side of your list (one shop touted its "St. Nickerless" knickers—undies printed with a fetching Victorian beauty with charms fully revealed).

More Details: While Hamley’s may not be London’s prettiest toy store (that would be the fabled Benjamin Pollock’s Toyshop, which Robert Louis Stevenson raved about), it is London’s largest. After passing the scarlet-and-gold uniformed doorman, you do battle with an army of electronic action gizmos on one floor, and then segue into a giant zoo of stuffed animals of every variety—including the cutest piglets, bunny rabbits, and more—in this stocking-filler heaven.

One reason Christmas in London is so special is the availability of myriad theatrical offerings. At present, the city is host to three different presentations of Cinderella and four of The Nutcracker (courtesy of four different ballet companies, including the hometown Royal Ballet’s regal presentation at the Royal Opera House, showing through January 18, 2012, and, at Sadler’s Wells, the funky Matthew Bourne take, through January 22, 2012). Also on tap for children of all ages are many pantomimes ("mimed" fairy-tales, a Christmas tradition since the Victorian era), including The Potted Panto, a send-up of eight classic tales from Aladdin and Sleeping Beauty at the Vaudeville Theatre, booking through January 8, 2012.

More holiday magic can be found at the Unicorn Theatre’s production of The Snow Queen (an Indian boy goes missing during a freak snowstorm in this updated version), and The Railway Children, from the E. Nesbit classic, starring a vintage steam train at Waterloo Station Theatre, both running through January 8.

More Details: Other than holiday presentations, the top ticket in town is Matilda the Musical, a new show based on the Roald Dahl book, which has garnered the greatest reviews of any show since Phantom of the Opera. It is being performed at the Cambridge Theatre at Seven Dials, but without that plane ticket you may have to wait until it hits Broadway.

Heading to London for the Holidays?

For up-to-the-minute recommendations and planning information, check out our online London Travel Guide. Another great resource for timely information on London is Visit London, the city’s official tourism web site.