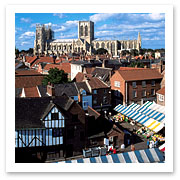 It would be unthinkable to visit North Yorkshire without going first to the historic cathedral city of York. Named “Eboracum” in Latin, York was the military capital of Roman Britain. The Vikings also claimed York as their capital and left bountiful evidence of their tenure. That’s not to say that the city exists in a time vacuum—stores here sometimes make the place seem like an extension of London’s Oxford Street.

To get a sense of how old York is, you should spend some time admiring the City walls. A walk on the narrow paved path along the top of the nearly three miles of wall leads you through 1,900 years of history, from the time the earthen ramparts were raised by the Romans to their current landscaping by the city council. The path crosses over York’s distinctive fortified gates or “bars”: the portcullis on Monk’s Bar on Goodramgate is still in working order. 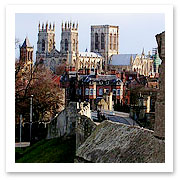 From just about anywhere along the City walls you can see the York Minster, the largest Gothic church in England. Inside, the effect created by its soaring pillars, lofty vaulted ceilings, and dazzling stained-glass windows is overpowering. After exploring the interior, including the Chapter House and Treasury, take the 275 winding steps to the roof of the great Central Tower, where you will be rewarded with panoramic views of York and the surrounding moors.

A few steps in a northerly direction from York Minster brings you to the Treasurer’s House. This grand 17th-century manse, the home of industrialist Frank Green from 1897 to 1930, reveals its owner’s fine eye for texture, decoration, and pattern. Delft tiles decorate the kitchen, copies of medieval stenciling cover the vibrant Red Room, and 17th-century stump work adorns the Tapestry Room. The “ghost” cellar is shown on the guided tour.

Next, head down either Low Petergate or Goodramgate to the famed Shambles, York’s best-preserved medieval street, full of half-timber houses. The street is a bit too full of souvenir and craft shops these days, but look above the storefronts and you’ll catch the York Minster soaring over all. 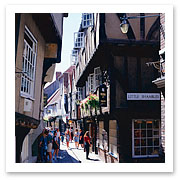 At the southern end of the Shambles, walk to Fossgate to visit the Merchant Adventurer’s Hall, with its medieval timber-frame hall. Retrace your steps on Fossgate and turn left on Coppergate and you’re in one of York’s oldest areas, where objects from the era of the Vikings have been discovered.

From Coppergate, Castlegate runs south, passing the former church of St. Mary’s and the Georgian-era Fairfax House, one of the most elegant Georgian townhouses in England.

Now you’re just a stone’s throw from the amazing Castle Museum, a stunning collection of ephemera, costumes, and vintage machinery that includes a working water mill as well as armor displays, costumes, and more.

Next, stroll back through the city center, up to St. Helen’s Square and the 15th-century Guildhall, a onetime meeting place for powerful guilds. It’s now an easy walk up Lendal and across the main road to the archaeological exhibits at the Yorkshire Museum, where you can view no end of wonders from dusty epochs.

It’s famous for teas and delicious cakes, but Betty’s (6-8 Helen’s Square; photo, right), at the opposite end of Stonegate from the minster, also serves light meals and a splendid selection of exotic coffees. $-$$

There can’t be many restaurants that have the distinction of occupying a former brothel, but Blue Bicycle (34 Fossgate) is one of them. The menu concentrates on fish, such as spiced monkfish, or seared swordfish with ginger and lemongrass. Among the excellent desserts, sticky toffee pudding and ice creams are good bets. $$-$$$

At Café Concerto (21 High Petergate), near York Minster, you can indulge in almost any style of food you care to name, from Caribbean to Continental. You might try the Cuban spiced chicken with sweet potatoes, followed by a piece of homemade cake and a cappuccino. $$

Best Souvenir
Mulberry Hall (Stonegate) is a sales center for all the famous names in fine bone china and crystal. The York Antiques Centre (Lendal) has 25 shops selling antiques, bric-a-brac, books, and jewelry.

Logistics: York is two hours by fast train from London.