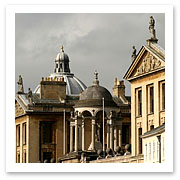 Oxford has been a center of learning since the 12th century. Except for the modern storefronts, the city stands as it has for hundreds of years. Oxford is 55 miles northwest of London, at the junction of the Thames and Cherwell rivers. The city is bigger and more cosmopolitan than Cambridge. Indeed, you’ll find plenty of traffic and suburban sprawl beyond the hushed quadrangles, chapels, and gardens.

The most picturesque approach to a college tour is from the east, over Magdalen (pronounced maud-lin) Bridge. After crossing the bridge, turn left off gently curving High Street for a sojourn through the University of Oxford Botanic Garden, where you’ll find literally thousands of plant species in lovely greenhouses.

Almost halfway up High Street, turn right onto Queen’s Lane and take in the extensive gardens and the row of gargoyles at New College, where you can amble through one of the loveliest gardens in Oxford.

A little farther up High Street, turn right at the 14th-century tower of the University Church of St. Mary the Virgin and behold the gilded gates of All Souls College and the magnificent 17th-century dome of the Radcliffe Camera.

The Bridge of Sighs and Bodleian Library lie straight ahead, and a left at Broad Street brings you to Christopher Wren’s Sheldonian Theatre. Step past its iron gates and those fabulous megabusts of the Roman emperors to check out the schedule for evening concerts here. 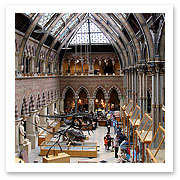 You may want to continue north along St. Giles to a possible lunch stop, the Eagle and Child pub, where J. R. R. Tolkien often met his friends, the “Inklings.” Next, check out the excellent Ashmolean Museum, on Beaumont Street. This is Britain’s oldest public museum and contains such wondrous objects as Oliver Cromwell’s death mask and many Egyptian and Greek artifacts.

If you’re a natural history buff, schedule a visit to the Oxford University Museum of Natural History (photo, right), where you can ogle thousands of exhibits in a massive Victorian Gothic structure.

With its glass-and-steel framework, Gee’s (61 Banbury Road), just north of town center, resembles a quintessential English conservatory. The constantly changing menu highlights French and English dishes with seasonal variations. The place is popular with both town and gown. (photo, below) $$-$$$$ 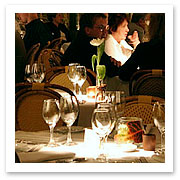 More than a century ago, Lewis Carroll took three children on a Thames picnic and told them the fairy tale of Alice’s adventures in Wonderland while sipping tea near a haystack. The haystack is gone, but you can still stop at the Trout Inn, a creeper-covered Thames-side pub 2 miles north of the city. Baked trout and mixed grill specials are on the menu. There’s a corner devoted to Carroll. (195 Godstow Road, Wolvercote) $-$$

Best Souvenir
Alice’s Shop (83 St. Aldate’s) sells all manner of Alice in Wonderland paraphernalia (this is Lewis Carroll country, after all), and Blackwell’s (48-51 Broad Street), family-owned since 1879, stocks one of the world’s widest selections of books.