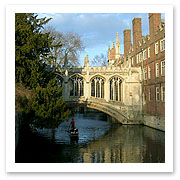 With the spires of its university buildings framed by towering trees, expansive meadows and riverbanks, the city of Cambridge is among the loveliest in England. The city predates the Roman occupation of Britain but there’s confusion about when the university was founded. One story attributes its founding to impoverished students from Oxford, who came in search of eels—a cheap source of nourishment.

When the colleges are open, the best way to gain access is to join a walking tour led by an official Blue Badge guide—many areas are off-limits unless you do. The two-hour tours leave up to five times daily from the city tourist offices.

Start at Peterhouse College, the grandest of them all, founded by the Bishop of Ely in 1281. One of the colleges closest to the train station, it lies on one side of Trumpington Street and stands across the way from Pembroke College, the “college of poets,” whose graduates include wordsmiths Edmund Spenser and Thomas Gray.

Next, walk up Pembroke Street, turn right, and continue on Downing Street. At the end of Downing Street you face Emmanuel College. Turn left up the shopping arteries of St. Andrew’s Street and Sidney Street, passing the often overlooked Christ’s College, with fine buildings from different periods. Continue along St. Andrew’s Street and Sidney Street to Sidney Sussex College—look for the portrait of Oliver Cromwell in the Hall—before turning right down Jesus Lane for one of the prettiest of all colleges, Jesus College, with its lovely Pre-Raphaelite stained glass (in the chapel).

Head farther north up Sidney Street and Bridge Street to Magdalene Bridge, where you’re likely to see punts on the River Cam. By the river, quiet and lovely Magdalene College flanks busy Magdalene Street—one of the glories of Cambridge is how quickly you can move from frantic, modern England to the seclusion of scholarly academe.

Now you’ll find yourself heading south, back into the city center. Cross back over the river and down St. John’s Street, past St. John’s and Trinity colleges. In St. John’s you can view the Bridge of Sighs, modeled after its Venetian namesake. Trinity is Sir Isaac Newton’s college, and outside the Great Gate stands an apple tree said to be a descendant of the one whose falling fruit caused Newton to formulate the laws of gravity. 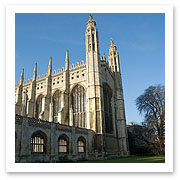 Ahead lies Cambridge’s most famous sight, the soaring, late-Gothic King’s College Chapel. King’s College (photo, right) itself faces King’s Parade, where students bustle in and out of coffee shops; you can climb the tower of Great St. Mary’s, the university’s main church, for a glorious city view. Behind King’s, the city’s Backs—its riverside gardens and meadows—make their presence felt at Trinity Hall and Queens’colleges, both of which will lure you off the beaten path. Opposite King’s Parade from Queens’, Corpus Christi College is a beautiful quadrangle you can access year-round.

To complete the circuit, regain King’s Parade and walk south, down to where it becomes Trumpington Street. You then pass Peterhouse, where you started. Just beyond, the Fitzwilliam is Cambridge’s finest museum, with superb art and classical collections.

Need a Break?
You can grab lunch or dinner at Loch Fyne Oyster Restaurant (37 Trumpington Street; photo, bottom), across the street from the Fitzwilliam Museum. The popular oysters and other seafood—mussels, salmon, tuna, and more—are fresh and well prepared. $$-$$$ 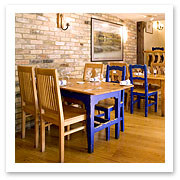 The 600-year-old Pickerel Inn (30 Magdalene Street) is one of the city’s oldest pubs. It’s great for a soothing afternoon pint of real ale and a bowl of potato wedges. Do watch out for the low beams. $-$$

The fashionable and stylish River Bar & Kitchen (Quayside, off Bridge Street) cooks up creative cuisine with Eastern influences—spicy lamb samosas with mint and cucumber dip, wonton prawns, or tuna on Mediterranean vegetables. At lunch, choose among the creative sandwiches. $$

Logistics
There is regular train service between London and Cambridge from London’s Liverpool Street station and King’s Cross station.