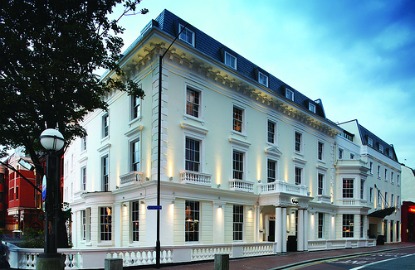 London is 2012's "it" spot, with its popularity booming as it hunkers down to host the Olympics and the Queen's Diamond Jubilee. As spectacular as the city is, however, it's a shame to be locked down within its limits: There’s just too much to explore within easy day tripping-distance. Here are our picks for the best day trips from London—the ones Londoners themselves can’t resist. They’re primed for what the Brits call a "day return," but can easily be extended to include an overnight stay as part of a longer UK vacation.

Picturesque Bath, set about two hours from the capital, has been a fashionable place to visit ever since the Romans ruled Britain nearly 2,000 years ago. The city’s natural hot springs, which heated its grand Roman Baths, are now the site of a museum depicting a particularly vivid view of life in that era. (Another period museum worth a visit is the Jane Austen Centre, a homage to the city’s most famous literary resident.) The thermal waters are still in use at Thermae Bath Spa, where soothing soaks can be booked in two-hour increments; spa treatments are also offered at two of the city’s most luxurious hotels, the Royal Crescent Hotel and The Bath Priory. For a delicious meal to follow up your soak, head to local favorite Menu Gordon Jones, a cozy gourmet restaurant that offers a regularly rotating multicourse menu.

A Day at the Beach in Brighton

A trip to the beach isn’t what most people associate with Great Britain, but Brighton’s funky oceanfront charm is fun even when it’s not warm enough to swim (which is indeed most of the time). The city’s under an hour by train from London, and filled with quirky shops and hotels like the Hotel Pelirocco, which has dubbed itself "England’s Most Rock and Roll Hotel." (Each room is uniquely decorated, with music-related themes like "Pin Up Parlour" and "Soul Supreme.") But the best things to do in Brighton are the most basic: Walking along the beach, taking a look at the Indian-inspired Royal Pavilion (originally built for King George IV), or eating fish and chips at a seaside café (although gourmands head to Terre à Terre, a vegetarian restaurant that even meat-eaters can love.)

A Step Back in Time in Canterbury

It’s only an hour and a half or so by train from London, but it’s easy to feel like you’ve gone back in time in Canterbury, where many centuries-only buildings are still intact (including some from the 14th century, circa the famous Canterbury Tales) and the spires of the famous, majestic cathedral always loom large in the background. But this small city’s also got modern touches, like Deeson’s, a foodie-favored restaurant with locally sourced ingredients, and chic boutique hotel Abode. Don’t miss stopping by Madame Oiseau, a French-run sweet shop that’s essentially a real-life version of the chocolatier featured in Chocolat.

Oxford‘s best known for its world-famous university, which offers tours at many of the colleges, but there’s plenty more to do in this truly quaint city, from taking in the art at the world-class Ashmolean Museum to just browsing along the cobblestone streets. For an upscale bite, the brasserie at the Malmaison hotel is a popular choice, tucked in the basement of a former 19th-century prison.

Several destinations on the fringes of Oxford are worth a visit, as well: Le Manoir aux Quat’ Saisons, a Michelin-starred restaurant from celebrity-chef Raymond Blanc (with accommodations, too, if you opt to sleep off your supper); Babington House, a country hotel (part of the super-stylish Soho House chain) set in a majestic former residence à la Downton Abbey; and Bicester Village, an outlet mall touting top brands like Dior, Missoni, and Marni.

For up-to-the-minute hotel and restaurant recommendations, plus the best planning advice, check out our online London Travel Guide.