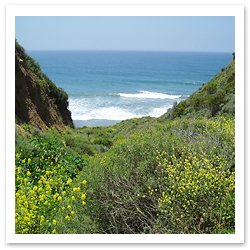 On a recent trip to Los Angeles, Fodor’s editor Jennifer Paull focused on parts of the city that are often overlooked or undiscovered by the tourist crowds — and sometimes even Angelenos.

As soon as I picked up my rental car at LAX, I gunned north up the Pacific Coast Highway. The popular-crowd beaches shimmered past: Topanga, Surfrider, Point Dume. But after being cooped up in a packed flight, who wants to be around swarms of people? A few miles past Zuma Beach I hit the jackpot: Robert H. Meyer Memorial State Beach, really a trio of rocky coves. Keep a sharp eye out for roadside signs pointing to the small parking areas of El Pescador, La Piedra, and El Matador. I ended up at La Piedra and hiked down a zig-zag trail towards the water. (This is where the shoes come in; there’s a bit of rock scrambling at the bottom of the trail.)

Once there, I had the beach nearly to myself, with just a few surfers bobbing in the water and the occasional local out for a walk. Since these three beaches are off the beaten path and don’t have any facilities other than port-a-johns, they tend not to be crowded, even on summer weekends. One caveat: don’t get stuck at high tide, when the ocean can come up to the base of the bluffs. 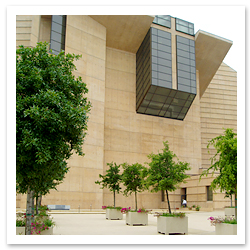 The swooping Walt Disney Concert Hall, designed by Frank Gehry, grabbed the spotlight downtown, but there’s another intriguing architectural landmark just across the street: the Cathedral of Our Lady of the Angels.

These striking neighbors are something of an odd couple. While the concert hall is all silvery, swelling curves, the ochre cathedral is all sharp angles and flat planes. At first glance, they look like the architectural equivalent of Jack Sprat and his wife. While the tour buses pulled up in front of the concert hall, I headed across a stark courtyard to the cathedral. Architect José Rafael Moneo left convention in the dust with his entryway. As you pass through the giant bronze doors, with their unique mix of images showing the Virgin Mary among other ancient spiritual symbols, you’re funneled into a sloping ambulatory. Walking past several asymmetrical chapels, you get glimpses of the nave, but the passageway coaxes you along until you turn and enter the nave from the far end. This prolonged entrance made me slow down even as it heightened anticipation for seeing the sanctuary. 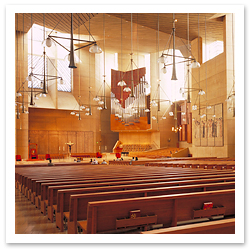 Once the nave came into view, everything had a golden glow, thanks to the translucent alabaster windows. How many architects would think to use stone instead of the usual stained glass? Through these windows, the intense L.A. sunlight turns creamy and soft. Along the nave’s walls hang tapestries showing dozens of saints or holy people — a very multi-culti assortment. (Including a few current figures, like the preteens in sneakers, may not have been the best idea though.) While the cathedral doesn’t have the concert hall’s Disney-esque, instantaneous appeal, it’s definitely worth a visit. The two buildings do have one thing in common: neither has many right angles.

A Market with Street Cred

Grand Central Market, also downtown, is an indoor collection of produce vendors, butchers, and food stands — not on the tourist circuit and a wonderful slice of L.A. life. 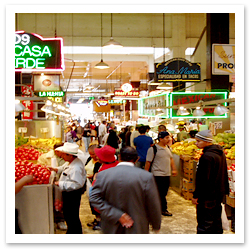 Suffering from California Transplant Syndrome — otherwise known as a serious craving for Mexican food — I made my way over to this longstanding market hall. It’s been around since 1917, ancient by L.A. standards. The mouthwatering smell of sawdust, grilling chicken, and a sweet whiff of horchata (a Mexican rice-based drink) led me to the taco vendors. The staff teased me for my tame meat choice — what, no hog maw? — and set me up with an overflowing, deliciously fresh tortilla with custom toppings. Ate it at a counter, elbow-to-elbow with a pair of elderly Pueblans who were sociably bickering over their lottery tickets. Afterwards I wandered around the stalls, checking out the heaps of chiles, bright pastel pastries, and aromatic spices. The best $5 lunch I’ve had in ages.

Picking a place to hike wasn’t easy, simply because there are so many options to choose from. The Hollywood Reservoir or Will Rogers State Park? Malibu Creek or Griffith Park? 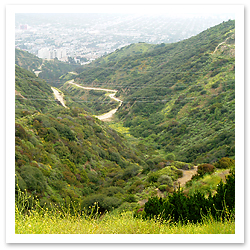 I ended up pairing my hike with a slaloming cruise on Mulholland Drive. (Cue the David Lynch soundtrack.)

Just off Mulholland, not far from the 101 Freeway, is a trailhead for the looping routes through Runyon Canyon Park, and I hoped that vantage point would give me a knockout city view. The hazy, overcast weather didn’t do the L.A. basin any favors, but there were good close-up views of the “Hollywood” sign and a few mega-mansion backyards. The trail itself was broad and easy to follow, and fellow hikers were quick to say “hi.” (Apparently this is a favorite celeb workout spot, so maybe people are on extra-nice behavior.) Quickly realized that to blend in, I would need both a tan and a dog.

Venice, Off the Boardwalk

Say “Venice” and most visitors think of the bodybuilders, street vendors, and goofy vibe of the Boardwalk. But Abbot Kinney Boulevard, a locally popular strip of boutiques and cafés a few blocks inland, is a far cooler example of the mellow Venice lifestyle. 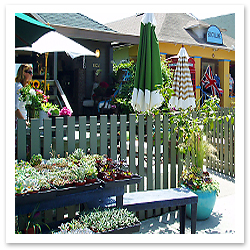 There isn’t a single chain establishment on Abbot Kinney (knock on wood). The little ramshackle beach bungalows are getting cleaned up, and a few modern buildings are shoehorning in, but basically this area stays close to its roots. The newest shops are nudging things upscale, but there are still plenty of places for surfwear and vintage odds and ends. My favorite stops include the following.

Equator Books How do you not love a bookstore that has a special section on circus freaks and bullfighters? The polished, garage-like space is a refreshing change from the crammed-rabbit-warren school of used bookstores. Lots of first editions and rarities, for quite reasonable prices. The store also doubles as a gallery; head to the back to see what’s hanging. (1103 Abbot Kinney Blvd., 310/399–5544) 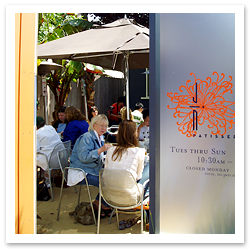 Jin Patisserie Behind a sheltering wall you’ll find a lovely little garden and bungalow, now known as one of the city’s best places for tea and pastries. The sweets often pair French technique with Asian flavors; try the Louvre, a glossy chocolate dome spiked with ginger. The boxes of handmade chocolates and bags of addictive cookies make great gifts or airplane snacks. (1202 Abbot Kinney Blvd., 310/399–8801)

Strange Invisible Perfumes Complex scents without any of the synthetic agents used in standard perfumes. Herbal, citrus, and woodsy notes give an edge to even the sweetest perfumes, like the “Lyric Rain” (jasmine and patchouli undercut with pepper and lavender). Bonus point to whoever gets the Shakespeare reference in the store’s name. (1138 Abbot Kinney Blvd., 310/314–1505)

Since I’m used to the crowds, grime, and squealing noise of the NYC subways, the L.A. subways came as a shock. Where is everybody? I hopped on the Metro Red Line and practically had the place to myself — and this was at 4:45 p.m. on a weekday. Each station’s design draws on L.A. history and culture, with murals, sculpture, and fun, quirky elements. 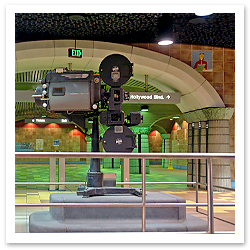 For instance, the Hollywood and Vine station has thousands of metal film reels covering the ceiling and vintage movie cameras on display. The trains and stations were clean, quiet, and strangely empty. I know that it’s virtually impossible to get Angelenos out of their cars, and that public transit isn’t always convenient in such a sprawling city, but it’s high time to get on board!