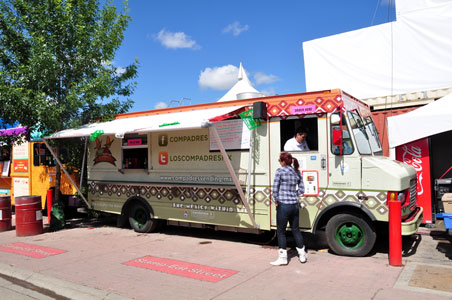 Pulling into a terminal near you: food trucks. While other airports have been allowing food trucks to pull into airport cellphone lots, the Los Angeles airport is bringing a food truck right into Terminal 4.

While LAX doesn’t actually allow food trucks to drive in off the streets, they’re showing their love of mobile cuisine by placing the shell of a food truck inside the American Airlines terminal. The truck, which opens for business on November 1, will be operated by chefs from popular LA food trucks on a rotating basis. The “truck” will be outfitted much like any other food truck, except that it won’t drive away after all the food has been served.

The food truck-airport relationship was started at the Tampa International Airport in Florida last December, where they invited the vehicles to park and sell food in the cellphone lot.

Bringing food trucks into the airport fold is beneficial for a number of reasons, not least of which is allowing travelers to get a first (or last) tasty bite of the region.