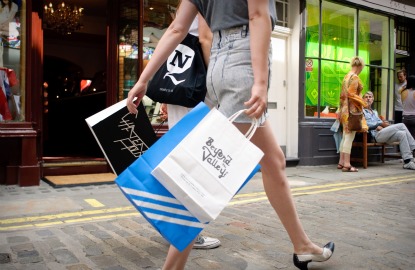 In recent years, London has emerged as a buzzy, one-size-fits-all shopping mecca for fashionistas. The fashion-forward set now descends on the city from all over to sniff out designers who are ahead of the fashion curve. And of those who who wish to don fresh finds, you could be one of the first to wear clothes designed by a future shooting star. Here’s where to look.

Keeping Up with the Windsors on London’s High Street

In the old days, the “By Appointment to…” logo discreetly lettered on the window of such shops as Penhaglion and Liberty, signified they provided goods to Her Majesty the Queen, Prince Phillip, or the Prince of Wales. But as Kate, the new Duchess of Cambridge, proved on her wedding day last June, the designers that revived London’s "Cool Britannica" fashion luster—Beatle’s progeny Stella McCartney, mad-hatter Philip Treacy, and late native son Alexander McQueen—are the same ones now updating the fashion mojo of the newest royal Windsors. For daily wear, Kate favors various High Street shops like Zara, Reiss, L.K. Bennett, and Whistles).

The Empire’s New Clothes in the Newburgh District

But if shoppers want to hunt down the next McQueen on their own, where should they head? Amazingly, to the very heart of London. Here, just one tiny block to the east of Carnaby Street (itself just one block west of Regent Street, London’s "Fifth Avenue") is the Newburgh District (pictured above), a maze of pedestrian lanes lined with specialist boutiques, edgy stores, and young indy upstarts.

The future of England’s fashion is being incubated right here in stores like Lucy in Disguise and Sweaty Betty. A check of the ingredients reveals one part 60’s London, one part Futuristic Fetishism, one part Dickensian charm, and one part British street swagger. Stir it all together and you have a collision of colors, cultures, ethnicities, and a mix of attitudes that turns traditional fashion on its head.

The Nouveau Boho look is best seen to its advantage at stores like Peckham Rye and Beyond the Valley. The former is a tiny, adorable boutique crowded with rockers and fashion plates who adore its grunge-meets-Brideshead Revisted vibe. The designers here take old-timey heritage icons—Henley Royal Regatta blazers, public school bowties, and Mod silk scarves—and give them a saucy, knowing twist. Venture down Newburgh Street to Beyond the Valley, an art-school showcase whose designers have successfully paired graphic art-prints with kitschy outfits.

While more than 60 percent of the 135 shops in this district (which extends to Carnaby Street, Foubert’s Place, and Marshall Street) are independent, there are also major labels—Barbour, Lacoste, Levi’s ("for denim connoisseurs")—that have opened concept stores here to showcase their vintage and one-off styles.

When artists and fashion-designers first colonize an area, scensters and developers are sure to follow. This real estate truism has been proven once again by London’s East End, the impoverished district that Dickens once immortalized, that Jack the Ripper once made notorious, and that is about to reap the benefit of the 2012 Olympics—as all of London is now tilting eastward due to this summer spectacle.

Befitting an area where many old Victorian factories are being recycled into pricey lofts, a number of vintage clothing boutiques—such as Junky Styling have started a craze for vintage garb that’s reconstructed into new frocks. And it really seems like old times at Blitz, a vast former furniture factory that was recently transformed into "the world’s first vintage department store," with separate floors devoted to antiques and vintage clothing. With racks filled with Marlboro Man leather jackets, sequined Indian silk tops, and Liberty shirts, this is just the place to top off your glamourette look. Little wonder fashion celebs like Sienna Miller, Victoria Beckham, and Noel Gallagher have been spotted heading East these days.

For a great post-shopping change of pace, head to the Hyatt Regency London–The Churchill, a Fodor’s Choice hotel that’s also a great spot for a time-out (it’s only two blocks from Selfridges and all the shops of Oxford Street). Compare your purchases over some libations in the hotel’s famously relaxing Churchill Bar.

If you’re headed to the shops of the East End, one of the best places to stay is the Hoxton Hotel, an uber-trendy, terrific-value hideaway that mixes industrial chic with a dash of tradition (it was also a Fodor’s Top 100 Hotel Award winner in 2011). The main scene-arena is its Hoxton Grill, which combines American steak-house style with French bistro chic.

Just two tube stops away from the Oxford Circus station (which is two blocks north of the Newburgh District) is the Arosfa Hotel, a Bloomsbury budget option with a big fan club, thanks to its friendly owners and history (it was once home to pre-Raphaelite painter Sir John Everett Millais). With well-designed guest rooms and contemporary public areas, this offers the best of both worlds.

For up-to-the-minute hotel and restaurant recommendations, plus the best planning advice, check out our online London Travel Guide. Another great resource is London’s official tourism visitlondon.com. For the most flights to London from North America, check out British Airways.