Just Back From: Food & Wine All Stars Weekend in Vegas 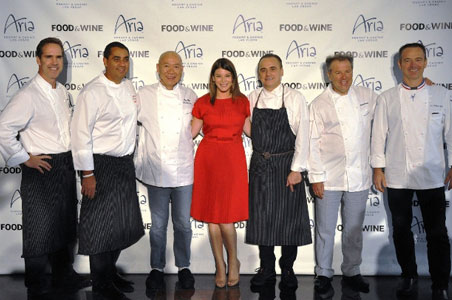 I was recently in Las Vegas for the 3rd Annual Food & Wine All Stars Weekend. In addition to some wonderfully special meals (the "Four Farms, Two Brothers" lunch at Bellagio and an extraordinary afternoon tea at Restaurant Joel Robuchon at MGM Grand, to mention just two) I had the opportunity to tour kitchens, meet chefs, and sample their best creations.  It was an extraordinary experience that allowed me to see some of the newest additions to the Strip. Since I stayed at the ARIA Las Vegas, I spent quite a bit of time touring the hotel and checking out everything that’s opened up there since the summer.

Kobe beef is back on the menu. Las Vegas restaurants have never stopped serving Kobe beef, but the importation of the real thing from Japan has been banned since the big earthquake of March 2011.  Since late August, those limitations were lifted, and you’ll now find genuine Kobe beef back on menus from Jean-Georges Steakhouse to Craftsteak and, of course, major Japanese restaurants. How can you tell if it’s the real thing? Trust the chef, and notice if the price is 10 times what you’d pay for a regular steak. 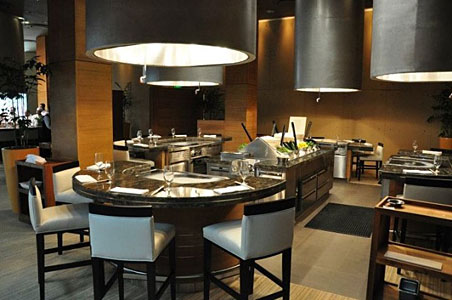 Tetsu at Bar Masa in ARIA. Masa Takayama’s Bar Masa in the the ARIA Las Vegas first attempted a shabu shabu concept as their "restaurant within a restaurant." Since August that space been renovated and reopened as Tetsu, a teppanyaki grill concept in the same space off the Bar Masa main dining room. What sets Tetsu apart is the quality of the ingredients:  the freshest seafood and herbs, excellent prime meats (including the requisite Kobe beef), and farm-fresh vegetables.  Not to mention sinfully delicious appetizers like toro tartare topped with caviar. This is not your typical Benihana experience. Expect expert preparations and typically high prices.

Julian’s at ARIA. The Center City hotel’s second new restaurant opened while I was in Las Vegas. In fact, I ate there on its second night. The menu of the restaurant (a transplanted local secret from Orange County) is divided into more upscale main courses and more typical (and mid-priced) Mexican fare. Both sides of the menu have their charms, but what sets the restaurant apart are excellent drinks and a seemingly endless variety of mezcals and tequilas from which to create them.  But don’t miss the giant wood wall art carved with a chainsaw; you will never think of a chainsaw in the same way again.

Cirque du Soleil’s Zarkana. Also at the ARIA, and just opened on November 1, is the replacement for Viva Elvis! (the first Cirque show in Las Vegas to close). Fresh from Radio City in NYC, the newest entree into the competitive Las Vegas show scene returns to the Cirque roots of acrobatic extravaganzas. 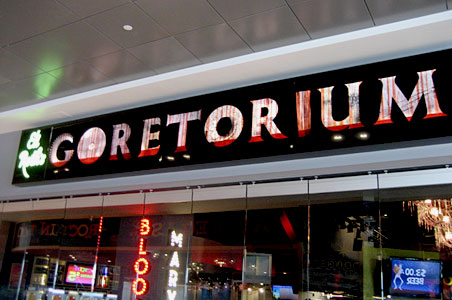 Eli Roth’s Goretorium. Horror fanboys will no doubt flock to this new attraction on the Strip in a small mall above a Walgreen’s (and directly across the street from The Cosmopolitan) on the corner of Harmon Avenue. With the imprimatur of the popular horror movie director, fans of the genre (and perhaps a few innocent souls) will enter the decrepit Delmont Hotel and experience the horrors within. One thing is certain, no one leaves without a fright (and a small amount of nausea). 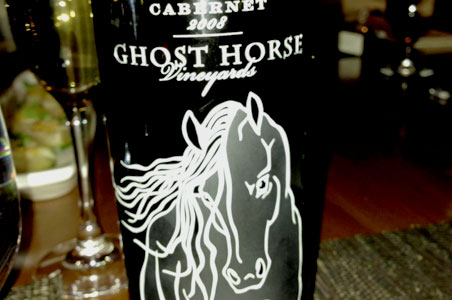 Bonus for Billionaires: For those few who can both appreciate and afford it, Ghost Horse cabernet, Todd Anderson’s rare and rarified cult wine, can now be purchased and drunk only at Craftsteak in the MGM Grand. How many bottles of $5,000 wine can a person drink (and that’s retail)? I tasted all four varietals, and I am assured that this is the most expensive wine I will ever drink.

Bonus for Non-Billionaires: If you don’t have endless funds, then take a bit of cheffy advice. I interviewed about a half-dozen chefs while I was in Las Vegas—everyone from Masa Takayama to Jean-Georges Vongerichten to Hubert Keller. Every single chef (!!) recommended Raku, a rather modest off-Strip Japanese restaurant, as one of their favorite Las Vegas restaurants. Next time I’m in Las Vegas, I’m heading there. You may not see a line-up direct from Top Chef, but the food must be the real deal.