News Apeksha Bhateja What Are the Chances You'll Get Monkeypox at a Hotel?
NewsFive Hot New Las Vegas Restaurants Not to Miss

A hotbed for cutting-edge restaurant interiors and menu concepts heavy on fusion and style, Las Vegas Boulevard might as well be called Restaurant Row. No longer host to the cliché Vegas dining scene that flowered during the ’80s and ’90s with humdrum buffets and $9.99 steaks, the most recent crop of culinary introductions continue to put this city on the map for foodies. From a five-star steakhouse named after Vegas’s former mayor to a new José Andrés concept restaurant linking Chinese with Mexican, here are our picks for five sizzling new Vegas eateries. 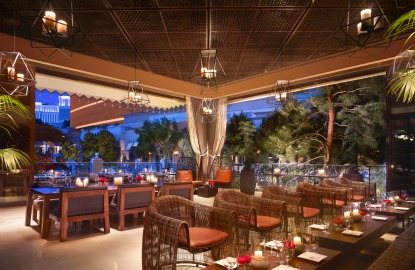 A more casual alternative to the Wynn Las Vegas and Encore Resort’s other, more high-end restaurants, La Cave is still fine dining by any other standard. Open for just over a year now, this cozy little bistro hideaway touts low ceilings, lit candles on the tabletops, and arched doorways, and does well at showcasing wines that are carefully matched to its oven-fired flatbreads. The menu is separated into easy-browsing sections (i.e. "from the sea" or "from the garden"), and also highlights small plates and a build-your-own charcuterie board with a selection of artisanal cheeses and cured meats. In a hurry? Sip your wine on the glam patio, with an ambiance that’s more Hawaii than Sin City (think wicker seating and palm trees). The Public House—with its tagline of "United We Stand, Pint In Hand"—popped up inside The Grand Canal Shoppes at the Venetian in late December, introducing one of the state’s few certified-beer cicerones. Like a sommelier, cicerone Russell Gardner coaxes palates toward certain beers on the restaurant’s 200-plus list. Beer, in fact, drives the lunch and dinner dishes, serving as a main ingredient—from IPA to Porter—in choices like Welsh rarebit, Bouchet mussels, and short ribs. Heavy on meat, chef Anthony Meidenbauer has imagined a carnivore’s dream on its small-plates menu with items like foie gras parfait, spiced pork rinds, "devils on horseback" (dates stuffed with blue cheese and wrapped with bacon), or roasted bone marrow. Simpler fare includes a grass-fed burger topped with bacon marmalade, and the heirloom beets salad.

Not-to-Miss Dish: Definitely more for grown-ups than kids, the Hazelnut Brown Ale Float tops off scoops of vanilla-bean ice cream with ale, and plunks warm oatmeal cookies into the mix, too. 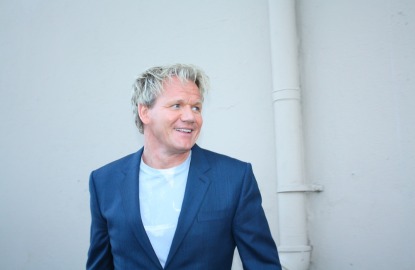 Expected to debut in May at Paris Las Vegas, Gordan Ramsay Steak is also the British Hell’s Kitchen star’s Sin City introduction. This is no intimate eatery: It’s 7,500 square feet of high design with a British twist (perfect timing for the 2012 Summer Olympics in London), orchestrated by the same architectural firm behind Rao and Bradley Ogden (both in Caesar’s Palace). A Union Jack flag is painted on the two-story restaurant’s ceiling. Kevin Hee, who once worked for Michael Mina, is at the helm in the open-air kitchen, putting out dishes like beef Wellington and shepherd’s pie, perfect for pairing with diverse bottles plucked from the restaurant’s three wine cellars.

Not-to-Miss Dish: The fish and chips, naturally, or try a selection from Ramsay’s beef-aging program. 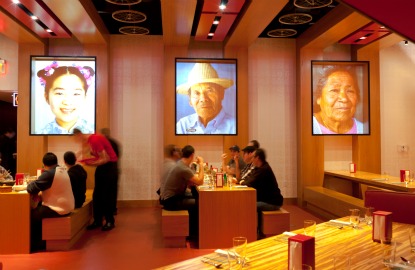 Eat Two Continents with One Fork at China Poblano

China Poblano is a street-foods inspired eatery by José Andrés, intent on merging Chinese and Mexican cuisine. Tucked inside the brand-new Cosmopolitan of Las Vegas, this go-to restaurant for noodles or tacos offers a menu divided into "From China" and "From Mexico" halves. Pick from satisfying dim sum options like Golden Pigs (steamed buns with Chinese barbecue pork and condensed milk), as well as lunch or dinner choices that include tacos with Yucatan-style pit barbecue pork. Despite being meat-centric, there are a few vegan and vegetarian options, including Nice but Naughty (spinach, sautéed lotus root, sesame, and Goji berries). Gazpacho with a tropical twist (pineapple and dragon fruit) and two Mexican egg dishes are also on the new brunch menu. 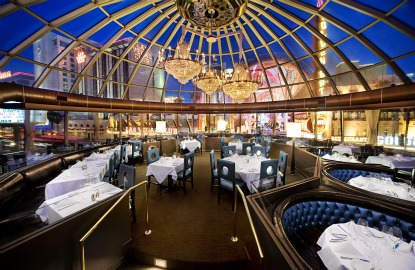 As an ode to former Vegas mayor Oscar B. Goodman, who left office last summer after a 12-year run in office, this fine-dining steakhouse debuted inside the Plaza Hotel & Casino in December. It’s in the lesser traveled downtown area, where Main and Fremont Streets meet. Set inside the hotel’s iconic dome, the steakhouse walls highlight historic photographs of Vegas. Open for dinner only, martinis are a specialty, as are the aged steaks cooked over an 800-degree grill. Fish dishes are worthy, too, including Manny’s Cajun Jumbo Shrimp and Cedar Plank Blackened Salmon. Perfect for popping in just for appetizers, the lineup of smaller bites includes Fat Herbie’s Seared Tuna and Steak Tartare à la Meyer, as well as sides to main dishes that are steeped in personality (Hymie’s Housemade Latkes, Shmuley’s Extraordinary Mac & Cheese). And it wouldn’t be a steakhouse without a chopped salad—Oscar’s Chopped Salad is topped with avocado and pink-peppercorn ranch dressing.