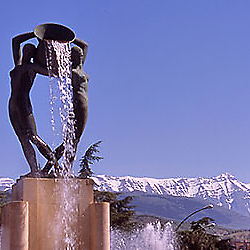 It’s an out-of-the-way destination in Italy, but unforgettable nonetheless…

Where: L’Aquila, Italy, 58 miles northeast of Rome. The city is 2,600-feet above sea level, on the shoulders of rugged Gran Sasso, the Apennine Mountains’ highest peak.

Top Outing: Start at the imposing 16th-century, Spanish-style castle that houses the National Museum of Abruzzo (photo below). Then walk past narrow Corso Vittorio Emanuele’s 19th-century arcades to reach “La Piazza,” the city’s heart. Get there before 1 p.m. to look over local goods in the open-air market (held daily). A short walk from the city center leads to Piazza di Porta Rivera and Fontana delle 99 Cannelle, whose 99 spouts shaped like men, women satyrs, warriors and animals commemorate the 99 castles that helped guard L’Aquila in the 13th century.

Also Worth Seeing: Nearby Sulmona is famous for “confetti,” not pieces of paper but colored, sugarcoated almonds that have been made here for more than 250 years. This tidy town, home of Roman poet Ovid, boasts two piazzas ringed with fine Gothic and Renaissance architecture, accented by an old aqueduct winding through the central piazza on Gothic arches. 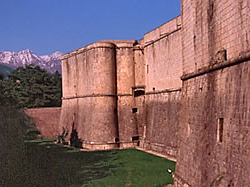 Best Restaurant: Tre Marie. Maccheroni alla chitarra, egg pasta cut with an implement resembling a guitar and served with tomato-based meat sauce, makes a good primo piatto, as does gnocchi carrati flavored with bacon, eggs and pecorino cheese. For a second course, agnello diavolo (lamb chops with chili peppers) is crispy outside, juicy inside, and so tasty you’ll be tempted to gnaw the last bits off the bone. Montepulciano d’Abruzzo wines go well with the local cuisine, especially those bearing the Colline Teramane appellation.

How to Get There: L’Aquila is about two hours (by car) west of Rome on the A24. There is daily bus service from Rome.

Photos and text by Betsy Malloy