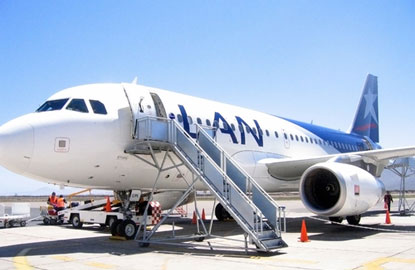 LATAM Airlines will provide the most comprehensive network of connections and destinations in South America, initially reaching about 150 destinations in 22 countries—including the US—with a fleet of 310 aircraft and more than 51,000 employees. LATAM cargo business will be even bigger, starting with 169 destinations in 27 countries.

Starting tomorrow, June 27, members of the frequent flyer programs for LAN and TAM airlines, LANPASS and TAM Fidelidade, can earn and redeem kilometers/points for flights on both airlines. LANPASS and TAM Fidelidade members at senior-level elite status (LANPASS Comodoro and Premium Silver and TAM Fidelidade Black and Red) will enjoy access, for themselves and a companion, to VIP lounges throughout the world, preferential check-in and boarding, and priority baggage. LAN Airlines currently offers elite members access to oneworld lounges and TAM is among the 27 airlines of the Star Alliance.

"The creation of this group of airlines is an opportunity to take South America to the world and to allow us to position ourselves to operate in an increasingly competitive environment due to the continuing consolidation of the global airline industry," said Enrique Cueto, the new CEO of LATAM Airlines Group.

For the short term, flights on LAN and TAM will continue to operate under their respective brands. According to a statement issued by the company, "passengers of LAN and TAM will benefit over time from greater connectivity, improved routes and frequencies, and reduced connection times."

Founded in 1976 and headquartered in San Paulo, Brazil, TAM is the largest airline in Brazil and Latin America while the Chile-based LAN, founded in Santiago in 1929 as Línea Aeropostal Santiago-Arica, is the most established. LATAM expects to triple its revenue in the next four years, producing between $600 and $700 million by 2016.

"The growth LATAM Airlines Group is expected to generate will allow us to offer flights to new destinations for our customers," said Mauricio Rolim Amaro, chairman of LATAM Airlines Group in an official statement. "In addition, we can support the economic, social and cultural development of our region, improving the connectivity of passengers and cargo in South America and the rest of the world."

All of these expectations remain to be seen, of course. "This is the beginning of a long journey," Enrique Cueto said. "The benefits to our customers will be added gradually as the integration of our companies progresses."

Fodors.com contributor Cathleen McCarthy is the rewards expert for CreditCards.com and covers entertainment and travel deals on her own network, Save on Cities. Her travel stories have appeared in The Washington Post, WSJ, Amtrak ARRIVE, Town & Country, and inflight magazines