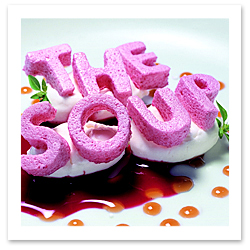 A new wave of culinary innovation is sweeping through restaurant kitchens in Spain’s big cities and small towns alike. The movement, variously termed “la nueva cocina” (the new kitchen), “molecular gastronomy,” or “avant-garde cooking,” is characterized by the exploration of new techniques and technologies, resulting in dishes that defy convention.

Olive oil caviar, hot ice cream, silky ham powder, crunchy mango purée, and carrot-juice noodles are just a few of the alchemic manifestations of taste, texture, and temperature that have emerged from practitioners of the style.

Ferran Adrià of El Bulli in Roses is widely credited as the creative force behind Spain’s new culinary movement, but chefs throughout the country have followed his lead. Among the most recognized contributors to la nueva cocina are Juan Mari Arzak, Martín Berasategui, Alberto Chicote, Quique Dacosta, Daniel García, Joan Roca, and Francisco Roncero.

Beyond Spain, the movement is having a seismic impact on the international culinary scene. Chefs from other European countries and the Americas have shifted their focus, looking beyond France — long esteemed as the world’s culinary vanguard — to Spain for new techniques and inspiration.

“With their renegade approach to cooking and extraordinary use of product, the chefs of Spain are leading the culinary revolution around the world, inspiring the great chefs of today as well as those yet to come,” says Dorothy Cann Hamilton, founder and chief executive of The French Culinary Institute, a culinary school in New York. 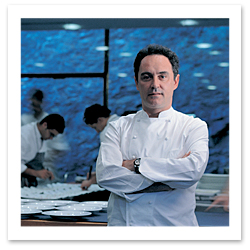 Leader of the Pack

Although Adrià (photo, right) has often been called the world’s top chef, his rise to fame didn’t happen overnight. Adrià was chef de cuisine at El Bulli in 1987 when he attended a cooking demonstration by legendary French chef Jacques Maximin in Cannes, France. There, Maximin spoke about his belief that “creativity means not copying.” By Adrià’s account, that statement transformed his approach to cooking.

The changeover to conceptual cuisine — where techniques and concepts became the driving force for Adrià’s creativity — occurred in 1994, when he developed a technique that allowed him to create dense foam from various liquids. A handful of new techniques emerged in those early years, but “nowadays, that process is accelerated,” he says. “Within one year, I am working with several types of techniques.”

Some of Adrià’s most famous dishes include puffed rice paella, Parmesan marshmallows, a cocktail of frozen gin and hot lemon fizz, mini cuttlefish ravioli with bursting pockets of coconut and ginger, and almond ice cream swirled with garlic oil and balsamic vinegar. These creative concoctions are served at El Bulli in meals of 25 to 30 courses, with each course no more than a few bites.

Many techniques of la nueva cocina are borrowed from the food processing industry, such as the use of liquid nitrogen, dry ice, emulsifiers, and gellifying agents like methylcellulose and calcium chloride. 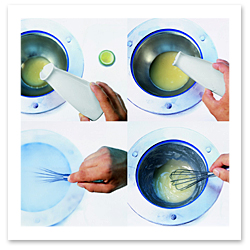 Juan Mari Arzak, for example, makes a bubbling strawberry cream sauce by adding dry ice to the sauce so it bubbles over the rim of its container and cascades onto grilled pineapples. Another innovation, “sauce veils,” are traditional sauces that have been gellified into thin sheets, cut into shapes, and placed over the food to be sauced. When a hot broth is poured onto the veil, it liquefies and sauces the food.

Other chefs gellify fruit and vegetable juices to create noodles. When juice is mixed with methylcellulose, it solidifies and can be extruded to form noodles. Using this technique, Roncero has changed the texture of olive oil, making spaghetti and gummy candies from a mixture of the oil with methylcellulose and natural flavorings, he says.

This technological approach to cooking may seem like a departure from the longtime guiding principle of Spanish cuisine — that preparations should be simple, allowing the region’s superior local ingredients to shine. But chefs practicing this avant-garde style insist that their creations are no less rooted in Spanish culture than traditional fare like paella or tortilla Española, a classic egg and potato omelet. Arzak explains his approach as “not traditional Basque cooking, but rather culturally influenced cooking from the region, using the products of the region,” he says. “We are doing things that haven’t been done before.”

Using eofilization, a complex freeze-drying technique, Arzak makes powders from ingredients like Serrano ham, peanuts, and licorice. “You use the powder to add flavor to things,” he says. “If you dust tuna with peanut powder and salt, it concentrates the underlying flavors to make the tuna taste like a more intense version of tuna.” Arzak also adds licorice powder to bring out the “true essence,” as he calls it, of calamari.

Along with new technologies, the increased accessibility of world goods and an unprecedented spirit of collaboration have helped advance la nueva cocina, according to Nodo’s Alberto Chicote. “Up until 10 years ago, many Spanish chefs were content to work in the way tradition dictated, and that’s not freedom,” he says. “Now we are in a period of breaking the borders and breaking all the rules. Only now can I work with fresh fish from the other side of the world with a day’s notice.” 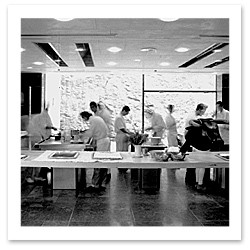 Chicote adds: “There is a culture of sharing between Spanish chefs — that is what has made the biggest difference. You go and share what you are doing, and it inspires other chefs to push themselves farther.”

In the competitive realm of high-caliber cooking, chefs have traditionally been secretive about their practices. “It is true that in other culinary movements chefs have been reluctant to share their knowledge,” Adrià acknowledges. “Some people ask us, why do you share everything? Why do you share your secrets? The answer is that that’s the way we understand cooking — that it’s meant to be shared.”

“It is just the way we see the world,” he adds. “We want to share our ideas and keep moving forward.”

Hungry? Plan your own culinary adventure in Spain.