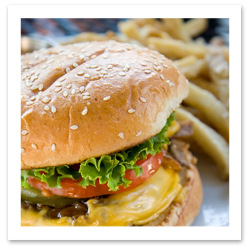 A beloved Los Angeles landmark is celebrating its 60th birthday. No, it’s not a bold-face-name hotel or something on Hollywood Boulevard. It’s the Apple Pan, a low-key hamburger spot in West L.A. Though the restaurant’s name nods to its homemade apple pies, its burgers have become touchstones, the ideal by which all others are measured.

The family-run operation has barely changed since 1947. The space looks like it did a couple of generations ago: a U-shaped counter around the prep area, old-school cash registers, soda poured into paper cones in cupholders. Most waiters and cooks have been there for decades; they move with incredible speed and focus. (Don’t pour your own bottle of soda or ketchup — they do it for you in the blink of an eye.)

The burgers come wrapped in paper, the toasted plain buns bursting with a thick hunk of lettuce. The meat’s a secret mix but it’s unfailingly juicy and flavorful. A tangy-sweet pickle relish sparks up the steakburger while the hickory burger drips with a smoky sauce. You can ask for Tillamook cheddar or onions on top, but never a slice of tomato. That’s just not the way they do things here.

If you happen to be craving a burger on a Monday when the Apple Pan is closed, don’t despair. Here’s a roundup of four other outstanding L.A. burgers — just in time for National Burger Month. Until cars get burger-specific GPS devices, you can consult Chowhound’s LA burger-hunting map.

Most Likely to Succeed:

Angelenos claim to be experts on all things burger, but everyone’s taste is different. How do you satisfy everyone’s fickle palate? The Counter turned this problem into a strength by devoting itself to customized burgers. As soon as you step in, you receive a 73-point checklist of everything from types of patty (beef, turkey, chicken, or veggie), toppings (dozens, from cheddar to grilled pineapple), and buns, allowing you to assemble your dream burger. If you’re not feeling decisive, order one of the signature burgers off the menu and a side of “fifty-fifty” where you can pair up regular, onion, or sweet potato fries. Or you may want to skip the usual suspects for a side of fried dill chips — a highly addictive burst of tangy, salty juice. All this customization was met with roaring success: Oprah recommended it on her show and GQ magazine listed a Counter burger as one of the 20 hamburgers to eat before you die. Thanks to this attention, plans are in the works to open 95 more branches across the country.

The original location of Tommy’s (2575 Beverly Boulevard; 213/378-9060), another 1940s-era burger joint, has a huge local following. (There are many other branches, but the first is the best and it’s open 24 hours.) At this red-roofed institution, the burgers are slathered with gooey chili and eaten at a stand-up counter. With something this voluptuously squelchy, it’s best to keep the paper wrapped firmly around the burger while eating. Even then you’ll discover there’s a reason they stock paper towels, not just napkins.

The Father’s Office (1018 Montana Avenue; 310/393-2337) burger in Santa Monica is an adults-only experience. Not because it involves anything more suggestive than the lusty scent of fresh meat, but because the Office is a bar, so only those 21 and up can indulge. There’s only one choice but it’s a potent one: dry-aged beef topped with a savory mix of blue cheese, Gruyere, arugula, bacon, and caramelized onions, all stuffed into a French roll. No substitutions are allowed and don’t even think about asking for ketchup. (A Heinz bottle will never darken their door.) If that attitude seems harsh, it certainly hasn’t stopped the crowds of burger-philes who wait on the sidewalk for a free table. To avoid a painful line, get there during the off-hours, late afternoon or late evening.

Since Pie ‘N Burger is near CalTech, there’s usually a staggering number of IQ points in the house. The 1960s coffee shop stands out for the thick burgers oozing with homemade Thousand Island dressing. Although it’s not quite the time-warp that Apple Pan is, the joint still does plenty of things the old-fashioned way, like making sodas fresh from syrup and carbonated water.