Coronavirus Leila Najafi Want to Stay in Costa Rica for Over a Year? A New Law Might Help You
Home  >  News   >   Kids-Free Zones Coming to a Plane Near You?

Kids-Free Zones Coming to a Plane Near You? 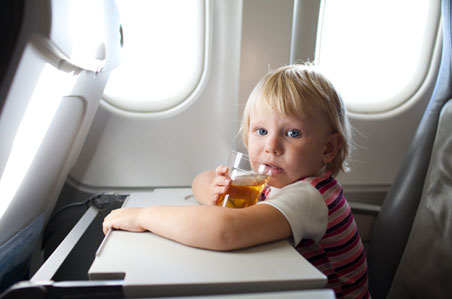 Finding a quieter airline cabin might be a bit easier in the coming months, but not due to any changes in the airplanes or how they operate. Several airlines are now changing configurations and policies to establish child-free zones on their planes. The intent is a reasonable one: trying to reduce the stress levels for everyone involved. But can it succeed?

The trend started in April when Malaysian Airlines announced that their A380 aircraft would not permit children under 12 in the economy cabin on the upper deck. The upper deck represents approximately 16% of the coach seats on that aircraft and the company is enforcing the rule through the passenger details in reservations; any booking with a child or infant designator in it will be blocked from those seats. For a while Malaysian was alone with their policy. But this week two carriers joined them.

First up is AirAsiaX, the long-haul arm of Kuala Lampur-based LCC AirAsia. The airline has established a “Quiet Zone” on their wide body aircraft in the first seven rows of the economy cabin. Similar to Malaysian, any bookings which include a passenger under 12 will be precluded from booking into the seats. The Quiet Zone is separated from the rest of the economy cabin by lavatories and a boarding door, providing an additional buffer which is expected to reduce noise from the rest of the cabin. Access to these seats comes with a price—roughly $12-36—but those rates are the same for any advanced seat assignment (the higher rate is for extra legroom at the bulkhead) on the plane.

Thai Airways will be offering a similar option on their A380 aircraft as well, though the rules do not appear to be quite as formally defined. Australian Business Traveller is reporting that the upper deck of the carrier’s brand new A380 aircraft does not have mounting points for bassinets. While this is not quite as strong as a formal policy against seating children in the area, it does significantly reduce the chances of having a baby in the area. And, similar to the Malaysian option, the upper deck economy cabin will be rather small, providing a more intimate feeling than the 300+ seats on the lower deck.

The kid-free option hasn’t made it out of Southeast Asia yet. Will it spread to other carriers? And should it? Are crying kids the worst problem in the air or just the easiest to point fingers at?

Photo credit: Child with juicebox on airplane via Shutterstock