News Larry Bleiberg You Can Finally Look Inside This Stunning D.C. Landmark. But Only for Another 25 Days
Home  >  News   >   Just Back from Versailles

Just Back from Versailles 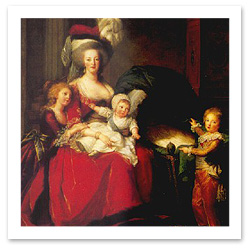 I’ve always been fascinated by Marie-Antoinette, the queen who famously, but fictitiously, muttered that the peasants should eat cake. She’s been treated so ambivalently by history: sometimes vilified as privileged and callous, sometimes pitied as a naive and misunderstood young girl, the prisoner of courtly etiquette, and tragically fated to a loveless marriage. I’ve always felt sorry for her: she saw her four children and husband die, and was herself beheaded at the age of 38. (I still can’t get over the fact that the guillotine, often referred to in France as the “national razor,” was last used there in 1978.) With interest in Marie growing — biographies about the queen are piling up and Sofia Coppola’s movie Marie Antoinette opens this week — I thought a visit to her home was in order.

And her home, of course, was Versailles, the grand château dreamed up by Louis XIV and architects Louis Le Vau and Jules Hardouin-Mansart between 1662 and 1690. Versailles is one of the largest palaces in the world and a challenge to visit. With more than 700 rooms, where does one begin? It’s best to take one of the guided, 90-minute tours, as you’ll see parts of the palace not available with the regular ticket, and you’ll have the benefit of a real, live tour guide.The tour I chose took me through the great Hall of Mirrors (73 meters long!) overlooking the gardens, as well as the queen’s antechamber, opulent bedroom, bathroom, the small study filled with shelves of books the queen probably didn’t read (she wasn’t really the bookish type), and the “secret” corridor that connected her apartment to the king’s. 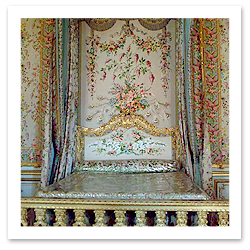 Particularly moving to me, in the queen’s antechamber, was Louise Elisabeth Vigeé Le Brun’s painting of Marie with her children: Marie-Thérèse, Louis Charles, and Louis Joseph, who is pointing to the empty cradle which had held the baby Sophie Hélène Bèatrice, who died and was painted out of the picture. It was in the queen’s bedchamber where I began to get a real sense of Marie and her tastes. The walls are paneled in gorgeously colored patterned silks bearing the images of flowers and birds and butterflies. More evidence of Marie’s taste is on display in the children’s bedroom, below the queen’s apartment: a pair of her gloves, scented with a re-creation of her surprisingly cinnamon-y perfume.

As we moved through the queen’s apartment, our guide explained that in Marie’s time the palace would have been filled with thousands of people, there would be ceremonies to get up in the morning and to go to bed at night, and that everywhere — always — there would be the scrutinizing eyes of the court and the public. When Marie finally gave birth to her first child (after 7 years of marriage) at least 200 people would have been in the room with her to make sure the child was really hers! Marie, or “Antoine” as she had been called as a child, did not like being a public spectacle.

Marie’s Home Away from Home
In fact, Marie disliked public spectacle so much she asked the king if there was somewhere on the grounds she could go to be away from prying eyes. He obliged and gave her some land (more than 2 acres) about a mile from the château, near Petit Trianon, the handsome mini-palace built on the grounds for Madame de Pompadour, Louis XIV’s consort. 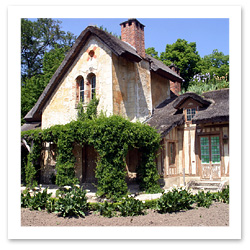 After putting her stamp on the Petit Trianon — out went Baroque, in came Neoclassical — Marie set about creating a sort of fantasy world just a stone’s throw from the Trianon, a storybook Hameau (hamlet) with a mock-Norman village complete with thatch-roof houses, a lake, a watermill, a grotto with a manmade waterfall, and a “temple of love.” Some say she liked to dress up as a shepherdess here, tending to a flock of sheep. In addition to the Hameau, Marie also built a small theater, Théâtre de la Reine, that would have held about 250 people. She would put on theatricals for her friends and family here, and historians say Marie sometimes acted in the plays, frequently taking the part of a servant girl. The theater is off limits to tourists, but you can view the opulent interior from the vestibule. The elaborately sculpted trompe l’oeil decorations and balcony look to be gilt and marble but are really only papier-mâché. It’s ironic that it was here, at the Hameau, in October 1789 — some say she was sitting in her grotto — that Marie first learned that Paris was marching on Versailles.

No trip to Versailles is complete without a stroll through Parc de Versailles, the 250-acre marvel of formal landscaping designed by Andre Le Nôtre. Louis XIV, who’d commissioned the work from Le Nôtre, was so taken with the gardens he wrote a guidebook that, among other things, lays out the ideal circuit for visitors, though most guests find it more satisfying to wander at will. The gardens are magnificent on their own, but they are supremely so when the many fountains are running and baroque music is piped over loudspeakers (11 a.m.-noon; 3:30-5 p.m.). 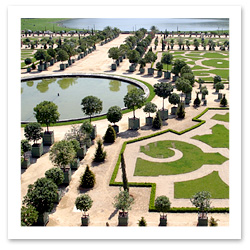 It’s true that a visit to Versailles — like any vast museum — can be exhausting. Fortunately there are several places on the palace grounds to grab a bite and get rejuvenated. I had a delicious lunch: grilled shrimp with citronella and creamy risotto, with a warm, fudge-filled chocolate cake for dessert (25 euros not including wine) in the garden of La Petite Venise, just off the Grand Canal (serving hot food from 11:30 to 3:30 p.m.). Or, if you’re feeling adventurous, pick up the makings for a picnic at the open-air Versailles market, held Tuesdays, Fridays and Sunday mornings in town at the Marche Notre-Dame, and have a leisurely lunch on the palace grounds or at the Hameau.

Two days in Versailles only intensified my interest in Marie; back home in New York, I’m looking forward to seeing the Coppola movie, and maybe reading one of the several new books out about her life and fashion taste.

Where to Stay
There are hotels to fit all budgets in Versailles but I had a wonderful night’s sleep at the Trianon Palace & Spa (I couldn’t help but wonder if the sheep outside my window were descendents of Marie’s flock). Guest rooms in the original 1910 building, “the Palace,” where I stayed, are bright and airy, with dark wood details and luxurious modern bathrooms. Rates start at 285 euros per night (2007 rates). (Rooms in the less pricey and newer “Pavilion” start at 205 euros per night.) The Trianon has two restaurants, including Les Trois Marches, as well as the Bar Marie-Antoinette. Guests have access to the spacious indoor pool, but spa treatments are extra. The Sofitel Hotel, on the Avenue de Paris, is convenient but not quite as luxurious (or expensive). Both hotels are within walking distance of the château.

Marie-Antoinette’s estate is open daily, noon to 7:30, except on some French holidays. There is limited access to the château and grounds during winter, November to April. Please note that the Petit Trianon will be closed for an unspecified amount of time for renovation starting November 2006. For more information, consult www.chateauversailles.fr.

If you prefer to have someone else take care of all the details, book a Versailles package, including hotels, tours, and transportation, with versaillesregion.com.