News Amy Fallon With Violence Continuing There, Should We #VisitUganda?
Home  >  News   >   Just Back From: Two and a Half Days in Vegas

Just Back From: Two and a Half Days in Vegas 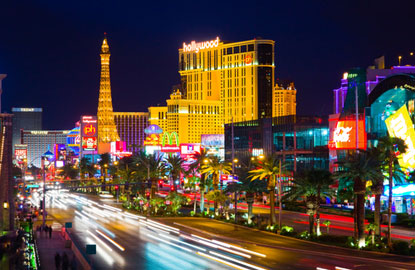 The drive from LA to Las Vegas wasn’t as bad as I’d expected. I thought it would be tedious—figuring that after the first hour of desert scrubland scenery, the next three hours would be a gaping yawn. But it wasn’t. In fact, it was kinda fun. The traffic leaving LA was light (we left at 10 am) and the four hour drive to Vegas went remarkably quickly, passing through landscapes that I’d only seen in John Wayne films. While Monsieur concentrated on the road, my mind wandered to those early pioneers who blazed the trail west with neither GPS nor air-con. Respect.

We were headed to Sin City to attend Virtuoso Travel Week, a huge conference that’s set up like speed dating on amphetamines, where delegates like Monsieur (hoteliers, cruise ship owners, etc.) are given 4 minute windows to wow almost 4,000 (4,000!) attendees from the world’s luxury travel market. Added to this were business lunches and dinners, which meant that Monsieur and I would really only less than a full day to viva Las Vegas together.

We don’t gamble, so spending it at a blackjack table wasn’t an option. Neither, unfortunately, was O, the aquatic Cirque-du-Soliel extravaganza which is closed Mondays. So, instead of booking a different show (who knew that Donnie & Marie were still a working act?) we decided to spend our half day together in Vegas leaving Las Vegas, on a sunset helicopter ride to the Grand Canyon with Maverick Tours. 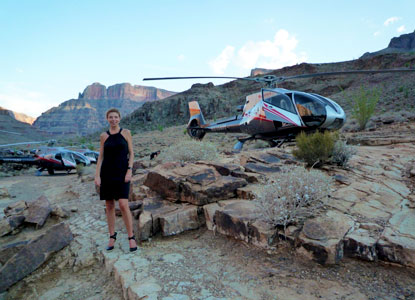 The trip was sensational. For a renowned ‘once in lifetime’ travel experience, it exceeded our expectations. Maverick runs a slick operation and The Grand Canyon was mindblowing. Landing in the middle of the canyon felt like landing at the beginning of time. Our pilot’s choice to play Pearl Jam when we took off was an added bonus. Respect.

The next day, while Monsieur did his thing in The Bellagio‘s enormous conference rooms, I bumped into Prince Harry and joined him for a game of pool.

Actually, while Monsieur did his thing in The Bellagio’s enormous conference rooms, I did mine in the enormous shopping malls of Vegas. Having blown my budget early on a pair of Brian Atwood heels, I was left to browse and people watch, and the people watching was astonishing, and not in a good way. I have never seen so many thoroughly-tattooed people in unfortunate clothes in all my life! Tattoos aren’t bad, per se, but they’re not good when combined with too-tight muscle shirts (that look tattooed themselves) and droopy cargo shorts (on both men and women). For all the shopping you can do in Vegas, the clothes on the Strip are… well, I wish I could have washed my eyes.

Sensory salvation was delivered when I treated myself to dinner at Twist, the Pierre Garniere restaurant on the 23rd floor of the Mandarin Oriental. The hotel itself is the real oasis in this part of the desert, providing a sophisticated reprieve from the constant din of slot machines and Celine Dion that was starting to make me to twitch. While my eyes and ears enjoyed the much needed break, Twist provided my taste-buds with a wonderful diversion. Every single bite was a masterpiece.

It was therefore no surprise that the next night, at Virtuoso Travel Week’s Gala Awards Dinner (to which I was honoured with a head-table invitation, and for which the Brian Atwood heels were perfect) the prize for Best Culinary Experience went to Mandarin Oriental, albeit for Sur Mesure by Thierry Marx in their Paris hotel. Other such "I knew it!" awards went to The Beverly Hills Hotel for Hotel of the Year (which we’d experienced in all its glamorous glory just a few days earlier) and Danilo Zucchetti at Villa D’Este (which we’d marvelled at in summer) for Hotelier of the Year.

As we drove to LAX on the last half day of our trip, Monsieur and I dissected the gala dinner. It had been a fun, well-presented event and Monsieur agreed that the awards were well-deserved. Would I want to tag along next year? It took me a moment to answer. Sure, if we stayed at The Mandarin. Otherwise, all bets on Vegas are off.