News Apeksha Bhateja Europe's Airports Are Chaos This Summer. And Now There's Another Problem
Home  >  News   >   Just Back From: Two and a Half Days in LA

Just Back From: Two and a Half Days in LA 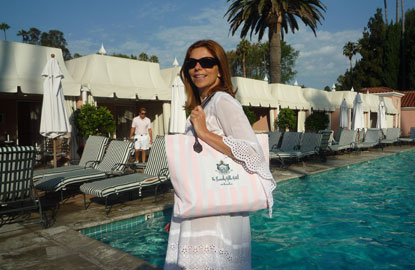 There’s a first time for everything, right? Well, this was my first time in LA. For some reason, people seem surprised to hear this. I don’t know why, but friends and acquaintances tend to assume that I’ve been to Los Angeles at least a dozen times, even though I’m a Canadian who’s lived in Europe for more than half my life. For years, a raised-eyebrow and an "Oh! You don’t know EL-AYYYY?" was the common response to my well-worn "Nope, never been." So I went.

Not that I actually know it, mind you: Monsieur and I were only there for two and a half days, after all. What I do know is Beverly Hills a bit, The Beverly Hills Hotel a lot, little bits of Santa Monica and Venice Beach, and some random bits with cool views that we drove to one night. (That was the night we ignominiously came to know that you need to book a table for dinner at the The Chateau Marmont, even if you just want a drink at the famed hotel. We got ushered to Bar Marmont down the hill which just isn’t the same.) 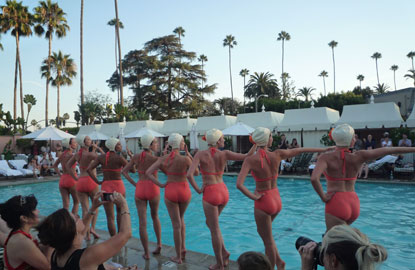 If we couldn’t imbibe the history (or cocktails) of The Chateau Marmont, I was more than happy to immerse myself in both at The Beverly Hills Hotel. Preferably by, or in, the pool. The night we arrived, The Aqualillies—a troupe of synchronised swimmers—were performing in an Ester Williams-esque homage to Hollywood’s glamorous past. I was enchanted. So, instead of spending our short time in LA seeing the sights of LA, we decided to spend the next morning sunning by that glorious pool and taking an (unsynchronised) swim.

When I followed Monsieur into the water, not only did I discover that the pool has piped-in music (wow) but the underwater sound-system was playing my favourite piece of classical music: Brahms’ Violin Concerto in D major, Op. 77. That was the most wonderful swim of my life, sunburn be damned. And diet be damned, because the pancakes for breakfast afterwards were the best I’ve ever had. (Then again, the diet had already been damned: The mini-bar contents at The Beverly Hills Hotel are also outstanding. Chocolate covered blueberries anyone? ) 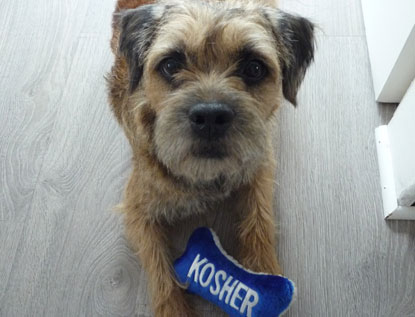 Feeling rather spoilt ourselves, Monsieur asked the concierge where we could buy a suitably "Beverly Hills" gift for our spoilt border terrier, Archie Lewoof, so off we went in search of Fifi & Romeo. En route we drove past a doggy care centre called Chateau Marmutt (I wonder if they would have banished Archie to Bar Marmutt?) and overshot Fifi & Romeo by a couple of blocks. A crafty u-turn later found us right in front of the shop, albeit on the other side of the road, which we crossed in search of the perfect souvenir for our pooch. Jaywalking? A crime?

At least our brush with the law was worth it. Fifi & Romeo was sensational and even if he never plays with the darn thing, we were pretty pleased with Archie’s new toy. 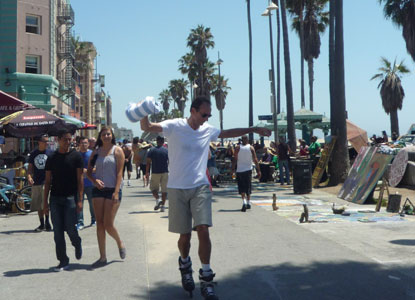 We were also pretty pleased with our lunch at Shutter’s on the Beach in Santa Monica the next day. My veggie burger with avocado—a nod to the healthy, hippie Californian kitchen that I’d long imagined—was delish. Shutter’s is a special place and a great base from which to explore the shore. To that end, Monsieur rented a pair of roller blades and whizzed off to Venice while I strolled along the boardwalk at a more leisurely pace: The sights and sounds of the freaks on the beach were much too entertaining to speed past. When I heard a tattoo-covered pan-handler begging for money for medicinal marijuana, I almost turned around and gave him a buck—as a reward for his honesty.

So do I now know EL-AYYYY? A bit. Enough to know that I’d like to go back. Maybe even a dozen times. I can’t believe I’d never been before!