Coronavirus David Silverberg Are Your Kids Heading Back to Summer Camp? Here's What You Need to Know
Home  >  News   >   Just Back From: The First Annual Bourbon Classic

Just Back From: The First Annual Bourbon Classic 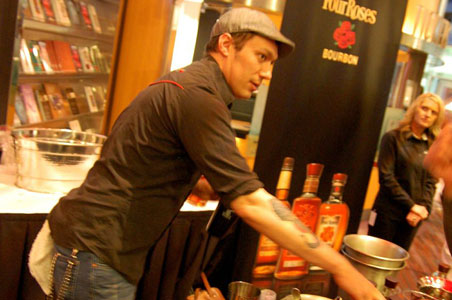 "Serendipitous science." That’s how Brent Elliot, quality manager for Four Roses distillery in Lawrenceburg, Kentucky, described the alchemy of converting corn, rye, and malted barley into Kentucky’s signature spirit. Though its vials and dials today, making whiskey has been an art in these parts since long before science got involved. Science pretty much just explained the ‘why’ behind the way distilling worked, he said.

Brent was leading our group through a distillery tour with Mint Julep Tours ahead of Louisville’s first-ever Bourbon Classic. You can’t drink all day if you don’t start in the morning, so on this uncharacteristically cold spring morning, tasting was encouraged as he led us through the fermenting room where vast barrels of cooked mash came to life with the introduction of yeast. The distillation process meant we didn’t need to worry about any germs we might be leaving behind when we dipped our fingers into the pungent-smelling brew. 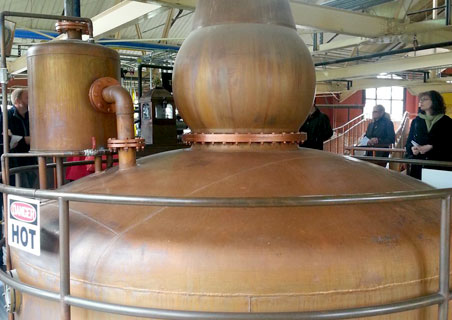 This was the start of a day of bourbon immersion that concluded with an entertaining tour of Buffalo Trace distillery where tour guide Fred Mozenter regaled us with trivia sure to come in handy the next time I want to impress someone. For instance, did you know that the pricier top-shelf bourbons are aged in barrels on the lower levels of the warehouse, and the cheaper stuff spends its time on the top level? Soaring summer temperatures in Kentucky can mean a difference of some 30 degrees between the ceiling and the floor, so the finer bourbons get the more consistent climate of the bottom level. Aging is just part of the process that makes whiskey bourbon, by the way: to claim the name, whiskey containing at least 51% corn, with no added flavors or colorants, must be aged in new, charred oak vessels, and has to be bottled at at least 80 proof.

Fred told us about the angel’s share too—that portion of bourbon that evaporates as it ages. Some 10% disappears the first year, with another 2-5% each subsequent year. In a barrel of 23 Year Pappy Van Winkle, he told us, they start with 53 gallons and after the angels take their share, there may be only 4-10 gallons remaining (but feeding the angels keeps them happy—and superstition has it that the happy angels protect from fires). 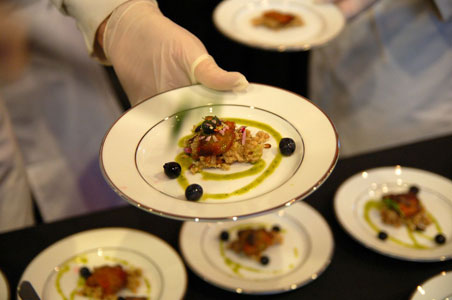 The Bourbon Classic brought enthusiasts in from around the country for a weekend of tasting, learning, and bourbon-fueled fun. The Classic kicked off on a Friday night, with a cocktail and plate pairing competition. Teams of bartenders and chefs from some of the top spots in Louisville joined forces with sponsoring distilleries to create tempting drinks and dishes. As a Louisville local, I was a proud to see these folks really represent. They definitely brought it, serving pork belly on corn cakes, crispy pig ear lettuce wraps, and rock shrimp slaw sliders. 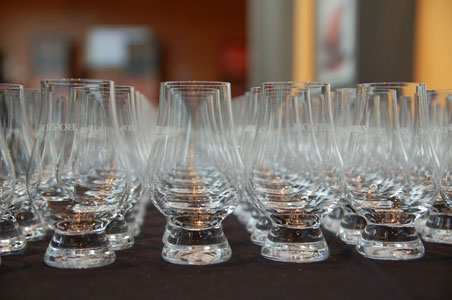 Saturday offered a chance to learn from some of the bourbon world’s luminaries. Panels, workshops, and conversations featured the likes of Makers Mark owner Bill Samuels; bourbon historian Michael Veach; "Bad Girl of Bourbon," bartender and author Joy Perrine; and a slew of other experts. Options ran the gamut, including geeking out with How the Barrel Influences the Bottle (my pick), getting tips for home mixologists with Crafting the Perfect Cocktails (and Serving them Right), and even a session on how to pair bourbon and chocolate. After the educational component, everyone got a chance to hone their tasting skills and discover new favorites by sampling the wares from a number of distilleries. I found a new favorite in Rowan’s Creek (a lovely, nutty bourbon from Willet). Parties and after-parties (with liberally flowing bourbon) peppered the weekend.

All in all, it seems a sure thing that this will become an ongoing annual event. The pair of brothers-in-law I chatted with who came in from out of state are already planning to return. You don’t need to be a bourbon expert to get the most out of the Bourbon Classic—all you need is a healthy appreciation for Kentucky’s native spirit. Follow them on Facebook to keep up with plans for the next event.