Just Back From: Southwest Utah

Utah’s landscape is everything you think it is: picturesque mountains, thrilling outdoor adventures, and a whole lotta sky. Throw in a handful of luxury resorts sprawling (seemingly) infinite acres and you get Southwest Utah. After spending several days exploring the region, I am quick to admit it is life changing. Not often does an entire region prod me to tap into my spiritual side but Southwest Utah brought mental clarity, a renewed energy for life and the longing to be more physically active. Blame it on the beauty of the red rocks.

Southwest Utah has three national parks—two national and a national recreation area—in addition to lakes and scenic drives. You’ll need a car (your best bet is to fly into Las Vegas Airport and drive) but if you’re not into rentals, ride with Wasatch Limousine. Don’t be fooled by the name: I rode in an SUV. 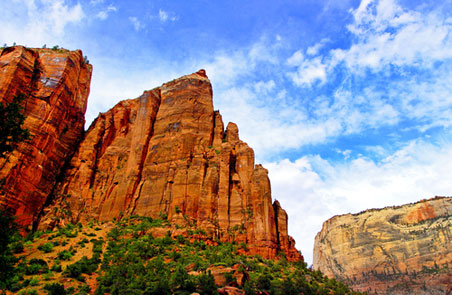 I kicked off my adventure with a visit to the region’s most popular national park: Zion. It’s Utah’s oldest and most visited national park with three million visitors a year. After meeting some hardcore Zion enthusiasts, they pointed out that more non-Americans (French, German, Korean, Japanese) have been roaming the canyons in the past few years; many were indeed confirmed with a leisurely morning hike. It could take days to see the entire park. Due to time constraints, I stuck to Emerald Pools trail, only a mile-long but rife with gorgeous flora. And while I didn’t run into any mountain lions (there are 69 animals living here) I did have a moment with a deer drinking along the creek.

A two-hour scenic drive along Highway 89 to Lake Powell was a straight shot. After miles of dry land, it was nice to let my eyes feast on the sublime Lake Powell, a manmade reservoir surrounded by sandstone walls. It was a piercing blue eye in the face of the desert. I was lucky to connect with Sol Fitness Adventures, a health-and-wellness-minded boutique outfitter that customizes physical and mental journeys, reconnecting guests to their bodies and Mother Nature. On stand-up paddleboards, the owner, Melanie, and I waded out to a rock outcrop, then lay back on our boards while she conducted a brief meditation class. Needless to say, all kinds of Zen was restored. 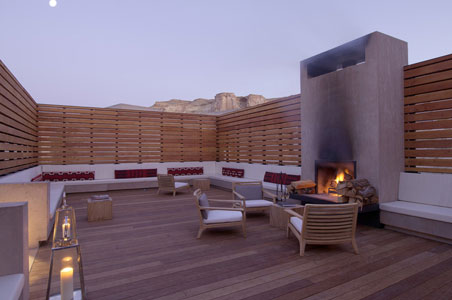 After Zen overtook my body, Amangiri became my temple. Just a quick ten-minute drive from Lake Powell—yet, still in the middle of nowhere—the uber-exclusive, 34-suite Amangiri is a celebrity hideaway, a sanctuary for the very well-heeled (rooms start at $1,050 per night). It’s not unlikely, though, that previous guests would agree every penny is worth it: the hotel has been almost at full occupancy since it opened two years ago. Sprawling 600 acres, Amangiri is all about service and commanding views from anywhere you stand. The signature pool is built around a rock outcrop, and the spa is undeniably divine. There’s a "flotation room" with imported sea salts from the Dead Sea for extra detox. My therapist Dave had a ninja grip for my deep-tissue massage. Amangiri offers unique outdoor excursions, too, like the cave peak via ferrata, essentially easy rock climbing up to canyon peaks that harbor stunning views, including nearby Bryce Canyon National Park.

When I arrived at Boulder Mountain Lodge in Boulder, Utah, I made a beeline to Hell’s Backbone Grill. Recipes are made with ingredients plucked straight from the organic garden, and the proprietors only use foods that have a historical connection to the area, so expect American Indian, Southwestern, and Mormon influence. The restaurant is worth the drive alone.

The cozy, no-frills Boulder Mountain Lodge has a gorgeous marsh in the backdrop. If there’s anything that truly feels authentically native, it’s the resort, thanks to the southwestern-style hospitality and themes: from the cuisine to the service to the design. Then there is the night sky, which is unforgettable. 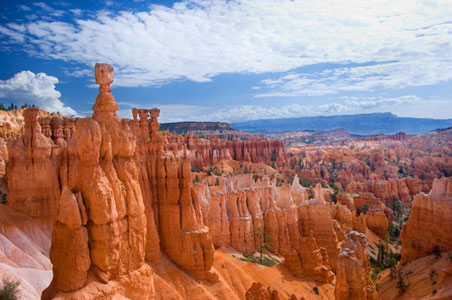 The sky was still commanding in the morning, when I went canyoneering with Excursions of Escalante in the Grand Staircase-Escalante National Monument. We headed to million-year old canyons where I anchored myself between massive rocks. Think "127 Hours" but safer—and with a guide. It renewed my appreciation for nature and adventure (and, let’s be serious—my life!). Overcoming route obstacles were metaphorical for challenges in my life. I can honestly say that what I felt here was nothing short of empowered.

Later, I departed on Utah’s famed All American Road (Highway 12), the landscape keeping me gazing out the window. For a thrill, I drove along "Hog’s Back," a narrow, streamlined sliver of highway perched on top of a mountain with insanely steep drops on either side. I was flanked by air, and it brought to mind, well, any road in Bolivia. Three hours later, Cedar City welcomed me with a sprawling landscape—and a yoga class, which was much needed after sitting in a car for hours. At the Sage Hills Yoga and Healing Center located within Om Ranch, the owners Melanie and Omar Abderrahman escorted me through the popular Labyrinth Walking Meditation. There wasn’t a better way to end the trip than a visit to Red Mountain Resort in St. George. It’s a holistic-minded escape with 82 rooms and 24 villa suites. If I wasn’t trekking on a daily hike or mountain biking or repelling (yes, I was unusually active here) I was hiding out in the award-winning spa. In fact, the Red Rock Hikers Massage (with extra attention paid to worn legs) was the best way to end the adventurous days. The potent concoction of peppermint, clove, and eucalyptus was soothing for my muscles, and the marine mud was a God-send for circulation. Who knew Zen could be so pampering?