News Amy Fallon With Violence Continuing There, Should We #VisitUganda?
Home  >  News   >   Just Back from Québec City

Just Back from Québec City 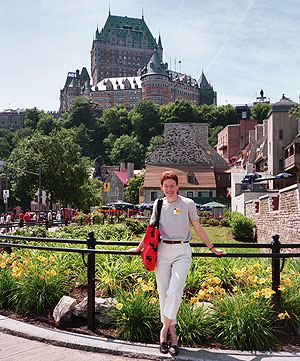 The combination of music and setting was unbeatable. The Summer Festival offered a mind-expanding lineup (I knew only a few performers), from Montréal pop-punk group Simple Plan to Algerian-French rock and rai singer Rachid Taha, who had everyone dancing at the Parc de la Francophonie. As for the setting, the concerts were just outside the romantic, walled old town, which overlooks the St. Laurent River.

It was easy to walk from concert to concert each night, sampling the three outdoor stages and street performances on rue St-Jean. The Summer Festival is large—45,000 people watched Simple Plan on the Plains of Abraham—but the venues were a 10- or 15-minute walk apart. My festival button (a bargain at US $16.50 for 11 days) admitted me at any time. The mostly local crowd was all ages and totally mellow. And since music really is a universal language, I didn’t need to understand French (or the Spanish of Lila Downs or Ojos de Brujo) to appreciate the performers.

What was essential during your trip?

Comfortable shoes. Not just for the performances, but because I couldn’t stop walking around Québec City. Inside the walls, each turn revealed tidy parks, local crafts shops or boutiques, quiet churches—and sometimes busloads of tourists! Dufferin Terrace in the Upper Town had awesome river and mountain views, and I walked down the Escalier Casse-Cou (Breakneck Steps) to the Lower Town and historic Place Royale. The distances aren’t great, but they add up. The funicular took me back to the Upper Town if I wore down. 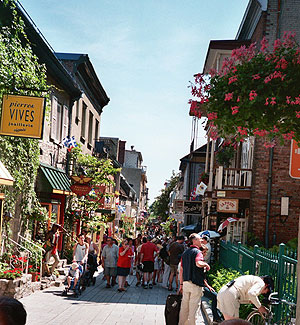 What were your favorite finds?

At a Lower Town wine bar on a narrow street called Cul de Sac, I sat outside and cooled off with Québec beer and tangy local cheeses. It was a perfect break. And at the Musée de la Civilisation (Museum of Civilization), the exhibit “People of Québec, Now and Then” put everything I saw in the city into better perspective. Displays and videos with news clips and interviews gave a quick, provocative history of Québec Province from its French colonial days to its separatist fervor in the late 20th century.

What advice do you have for someone going to Québec City?

My instinct is to avoid cities when big festivals are going on, but I’d recommend a trip during the Summer Festival or another event here. It doesn’t matter if you don’t know the musicians. Check the festival Web site in advance, then go and have fun. Or try the Winter Carnival to see how Canadians play in the cold. It’s easy to fit in other activities around the events. Just make room reservations two or three months in advance or you’ll have to stay farther from the city center.

Photo 1: Linda is in front of the Hotel Château Frontenac in Lower Town.