News Nicole Brewer The Dating (Mis)Adventures of a Single Black Woman in the Middle East
Home  >  News   >   Just Back From: Petra, Jordan

Just Back From: Petra, Jordan 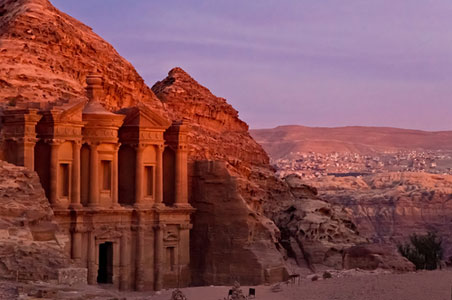 Even if you haven’t been to Petra, you can probably picture the ancient Nabataean city carved out of rose-hued sandstone. Besides seeing it in countless photos, postcards, and textbook images, if you’re anything like me then the Jordanian World Heritage Site first entered your line of vision with Indiana Jones and the Last Crusade (a reference locals are sick of, but I can’t help it).

Ready for adventure, my friend and I were surprised to see the forecast predict rain and snow (isn’t it the desert?). But we remained resolute in our mission to experience what nineteenth century poet John William Burgon described as "a rose-red city half as old as time." Wearing thick socks and lots of layers, we arrived in Wadi Musa—the town closest to Petra—to discover a tourist area at the nadir of the low season.

A note to intrepid travelers: If you want to avoid the crowds and see Petra with only a handful of other tourists, then consider going in January when prices are low and the place is empty. But, be warned that it’s cold, potentially rainy, and there’s a chance that the park will close due to inclement weather. 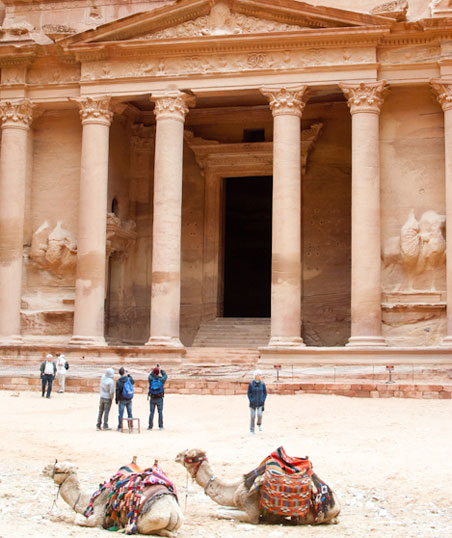 The first afternoon we were able to explore Petra without an umbrella. Going against the flow of tourists (most people were leaving already), we strolled through the mile-long siq—the ancient, naturally formed entranceway to Petra’s famous treasury. We stared up in awe at the narrow walls of the gorge, tie-dyed shades of red, pink, and brown and as tall as 600 feet in some places.

Finally, Al Khazneh—most commonly known as The Treasury—came into view as the Siq opened up onto a large plaza. The most easily recognizable site within Petra, The Treasury is a massive mausoleum carved right into the rock face. There are camels in front, just like in the pictures, and while you can’t go inside it’s not difficult to imagine Indiana Jones entering to find the Holy Grail. 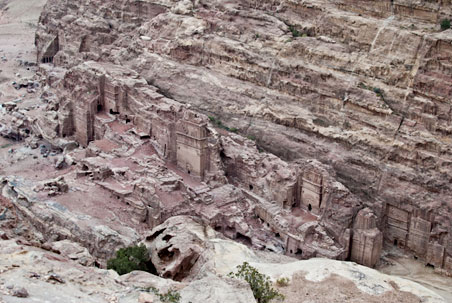 Continuing on, we climbed the hundreds of stairs cut into the rock to get to the High Place of Sacrifice, used by the Nabataeans to perform sacred animal sacrifices thousands of years ago. Today it’s prized for its bird’s eye view of Petra, which allows you to take in the grandeur and vastness of the ancient city.

By the time we made our way back down the sun was setting. The local Bedouins, who have called Petra their home for centuries, packed up their stalls and led the donkeys back to their villages on the outskirts of the park. Some lit fires in the caves and it dawned on me that while I had always thought of Petra as an archeological wonder, in many ways it remains a living, breathing city.

The next morning we’d hoped to see Petra at sunrise—it’s supposed to be phenomenal—but instead we waited for the rain to let up before heading back to explore the ancient capital once again, this time armed with umbrellas. 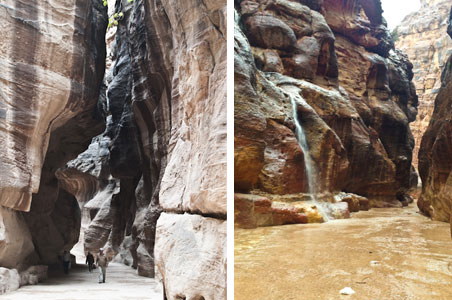 Although it was cold and wet, walking through the Siq in the rain was magical in its own way. Small waterfalls were rushing down the ravine into ancient drainpipes and cisterns. We got to witness firsthand the brilliant water collection methods that allowed the Nabataeans to take advantage of flash floods like this and flourish in the desert year-round.

Perhaps a bit optimistic, we’d hoped to cover new ground and make it to the Monastery, Petra’s largest and furthest monument. But as the Siq flooded beneath our feet we knew our chances of seeing the massive temple were slim. Indeed, after warming up in a Bedouin stall near the theater, where they graciously offered us tea and a place by the fire, we were trucked out the back entrance of Petra with the rest of the remaining tourists.

As T.E. Lawrence, better known as Lawrence of Arabia, wrote home in a 1914 letter, "You will never know what Petra is like, unless you come out here. Only be assured that till you have seen it you have not had the glimmering of an idea how beautiful a place can be." Like so many before me, I’ve caught the Petra bug and am already plotting my next trip back, rain or shine.