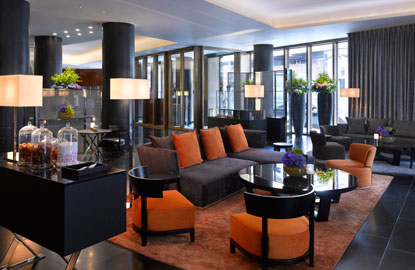 Knightsbridge, just south of London‘s Hyde Park, has long been an area populated by the higher reaches of Britain’s upper crust. But in the past decade there has been an influx of the even richer global elite, leading to old favorites like Harrods and Harvey Nichols being joined by boutiques from Continental luxury brands like Prada, Gucci, and Dior. It’s also led to long-time residents complaining of visitors’ noisy Maseratis and Lamborghinis drag racing through the narrow streets.

The new character of the neighborhood was defined by the opening last year of One Hyde Park, an emblematic building with some of the most expensive flats in London catering for residents who want panic rooms and bulletproof glass. Practically across the street but embodying a very different concept of luxury is the new Bulgari London hotel. Design, not bling, is key here.

Bulgari itself is a high-end global brand, but better known for the jewelry and silver it has been making since the late 19th Century. In the 20th it expanded into other luxury goods such as watches, scarves, and fragrances, and in the 21st into hotels, with outposts in Milan and Bali. 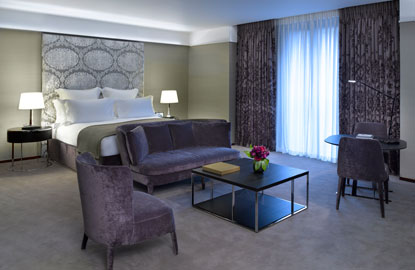 The London edition has 62 rooms and 23 suites, along with eight residential apartments on the upper floors. Suites resemble the kind of private apartments featured in Architectural Digest, and may have working fireplaces, studies complete with stocked bookshelves (the hotel has a books curator), dining tables for eight, granite kitchens, washing machines, and bathrooms as big as a small studio. Oh, and onyx marble steam rooms.

Because the Bulgari is, amazingly, the first new luxury hotel in London to be built in 40 years, the rooms are unusually large, the water pressure unusually strong, and the soundproofing unusually efficient—the corridors, lined in the polished mahogany that characterizes the hotel’s décor, are particularly hushed. 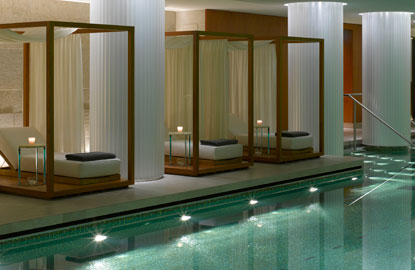 Starting from scratch has allowed the Bulgari to build down, so most of the guest facilities are on the five underground floors, notably a two-story leisure complex with 82-foot mosaic-lined pool, spa with 12 treatment rooms, high-tech gym, and foot and nail clinic. Other subterranean public rooms include a digital cinema (there’s also a DVD collection, selected by none other than producer Lord David Puttnam) and conference rooms equipped with snazzy leather and chrome chairs.

A similar aesthetic prevails in Il Ristorante, the hotel’s (windowless) restaurant that specializes in Northern Italian classics like risotto with saffron and bone marrow. Everything is excellently executed (except at breakfast, where standards fell a bit), if perhaps lacking a quirky London twist. On the other hand, plenty of creativity has gone into the delicious bespoke cocktails on offer at the stainless steel Il Bar adjoining the ground floor lobby. 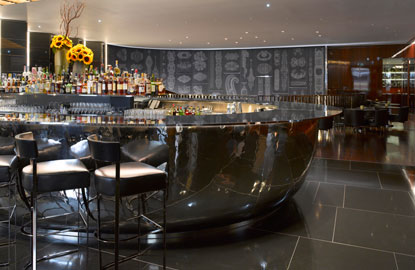 Despite being located in prime shopping territory, there is a definite businesslike, somewhat masculine air about the hotel. It’s more a tailored Armani suit than frou-frou Dolce & Gabbana frock, while the subdued lighting and absence of daylight in the public areas (guest rooms have floor-to-ceiling windows) create the feeling of a sumptuous cocoon.

The austerely elegant décor is impeccable yet comfortable and the service attentive. Don’t come here expecting a bargain, but rather a chance to experience the lifestyle of the international rich. And if for some unaccountable reason you forgot to bring your car and chauffeur, there are good bus and Tube connections just outside.