News Sorrel Moseley-Williams The New President of Chile Has Chosen a Very Unusual Place to Live
NewsJust Back From: Heidelberg

Just Back From: Heidelberg 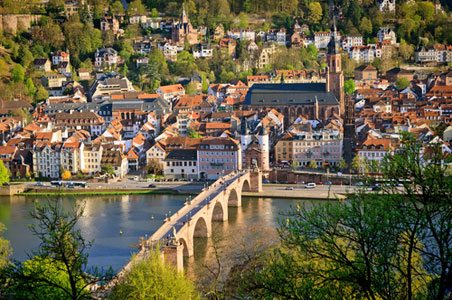 Everyone has a favorite romantic European city. For some it’s the gondola-navigated canals of Venice. For others, it’s the classic escape to Paris. After a recent trip to the southwest part of Germany, Heidelberg has just shot to the top of my list. Nestled in a narrow valley beneath the ruin of a 13th century castle along the Neckar River, this university town offers winding cobblestone streets and a picturesque baroque Aldstadt (Old Town) unblemished—unlike many German towns—by effects of WWII destruction.

Perhaps the most pronounced landmark is Heidelberg Castle, which protrudes from the north-facing hillside in a rustic sandstone ruin. Dominating the view of the historic town, the castle has a storied past of love and war, which is perhaps what best frames Heidelberg’s romantic appeal. You can scale the steep slope to the castle walls by foot—it will certainly get your heart rate up—or you can take the Bergbahn, a funicular that goes from the Kornmarkt station in the Old Town. Be sure to get off at the first stop, if you’re just planning to see the castle. Otherwise, you can ride to the top of the hill to the Königstuhl, which is the highest point in Heidelberg offering magnificent views of the entire Rhineland. (On a clear day you can see Mannheim, Karlsruhe, and even the northern tip of the Black Forest.)

But before heading straight for the castle, you can better appreciate Heidelberg by easing in to some of the major landmarks. The Heidelberg Tourist Office offers tours of the Old Town that take you to all points of interest in about two hours. But even if you opt to discover it on your own, you won’t be disappointed. 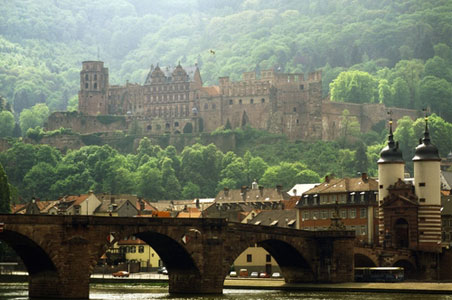 Start at the Old Bridge (Karl Theodor Bridge) which was built in the late 1700s for Prince-Elector Karl Theodor and still stands as the main gate to the Old Town. From here, walk across the bridge towards the northern side of the city to the trail entrance of the Philosopher’s Walk (Philosophenweg). A somewhat steep trail, this famous walk is about 1.5 miles to the top and is said to have inspired numerous scholars and philosophers. With its breathtaking views, it will inspire a deep appreciation for the beauty of this city.

Make your way back to the bridge and begin winding your way through Old Town up to the main Marktplatz where you’ll find Heidelberg’s Town Hall in an open square of shops, cafés, and fountains. Further west is Heidelberg University, which serves as a cornerstone of the city. It first opened in 1712 and still draws academics from around the world. The surrounding area is a bustling district for cafés and shops particularly along Main Street (Haupstrasse), one of the longest pedestrian zones in all of Europe. Stop in at the Baroque-style Jesuit Church, which was originally built in 1712.

Make your way up back past Marktplatz to the Kornmarkt, where you can begin your journey up to the castle. From the top, you can look back on and savor everything you’ve explored—and perhaps even catch the sun on its way to set on the day.

The castle itself offers everything from picturesque views (particularly from the Belvedere Terrace) to walking history tours to a fascinating Pharmacy Museum. You’ll also find a cellar, which is home to one of the largest wine barrels, the Grosses Fass, in the world. Built in 1751, it was used by royalty as a storage tank for large parties. With the capacity to hold more than 220,000 liters of wine, it certainly is large, but the actual quality of that wine is…questionable.

The Castle Gardens are lovely and though it’s beautiful to visit during the day, you’ll find it truly romantic here at night beneath the stars, looking over Old Town all lit up below.

Dining in Heidelberg is a feast for the soul. You’ll find a healthy selection of restaurants serving traditional German food, as well as a few unexpected cuisines—this is a university town, after all. For a casual eatery, stop in at the Bierbrezel on the Haupstrasse near the main cathedral, which specializes in pizza-like flatbreads made with a range of toppings on pretzel dough that’s baked in a wood-fired oven.

For a classic German meal amongst locals, stop into the White Swan. A wide selection of local beers and regional wines pair well with hearty dishes like sausage and sauerkraut, grilled steak with chanterelle gravy, pork tenderloin with spaetzle, and some of the best home-fried potatoes in the country. (Be sure to save room for apple strudel with vanilla cream.) 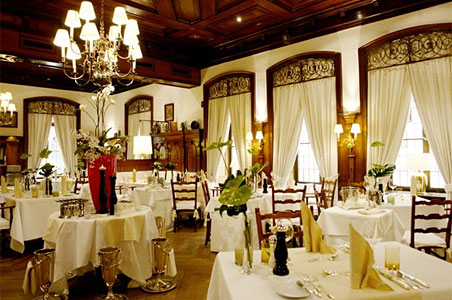 If you’re in the market for full-throttle romance, look no further than the restaurant in the Der Europaischer Hof, a hotel near the University. Chef Peter Grün puts creative, contemporary spins on classic German dishes on both an a la carte and seasonal tasting menu, both of which are paired with lovely regional wines. Since its likely that you won’t want to leave anyway, why not spend the night in one of the hotel’s large suites, overlooking their tranquil courtyard? Or, for a bit more history, the Haus zum Ritter (Knight’s house) is just off Marktplatz across from the cathedral and is the oldest private house in Heidelberg. Originally built in 1592, the house is now a hotel boasting beautiful architecture balanced with all the modern amenities you’d want.

Don’t leave Heidelberg without stopping by the Knösel Chocolaterie. This historic confectionary is famous for creating the Heidelberg Student’s Kiss, a sweet treat created in 1863 by Fridolin Knosel as a chocolate gift to give a loved one. It was soon adopted by young ladies at the University as a way to send a sweet "kiss" to the gentleman of their affection. The chocolaterie still exists today along the Haspelgasse in the Old Town and its specialties leave lingering reminders of this quaint little town along the Neckar River.