News Apeksha Bhateja These 5 Countries Are the Most Vulnerable to Climate Change
NewsJust Back From: Feast Portland

Just Back From: Feast Portland 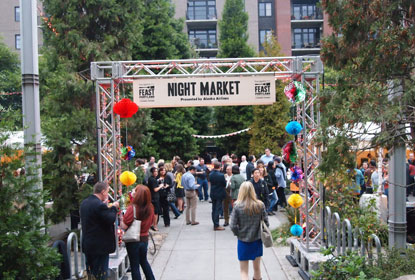 There’s nothing scene-y about easy-going Portland, except for the farm-to-table food scene. Surrounded by farms, rivers, and peaks producing fresh everything, food and drink is something Oregonians take seriously, and last weekend, this bounty took centre stage at the first annual, Bon Appetit-sponsored Feast Portland, and we were on the ground with a camera, a pen, and… stretchy pants.

With a fork firmly planted in the country’s culinary culture, it’s more than just-picked and just-caught that sets Oregon apart; eating and drinking goes beyond sustenance to lifestyle. Take Portland’s cocktail king and Clyde Common’s head barman Jeffrey Morgenthaler, who took up mixololgy after degrees in interior architecture and physics. For him, making drinks is an art and science he approaches with academic rigor, testing and re-testing drinks in beakers and barrels until they get an A+. Not satisfied with conventional egg-nog or apple juice for his creative concoctions, he makes his own, and this weekend he shared some of his trade secrets to a room of thirsty cocktail connoisseurs.

Nursing our cocktail-soaked soiree with a jolt of joe, Friday gave us a jump with a home-brewing demonstration at Stumptown Coffee. We learned that making coffee that rocks takes equal parts time, tools, and techniques, and above all, starts with a high-quality grinder. During the session, the term ‘nerd’ came up a lot, referring to the intense research behind each technique. It’s this geeky devotion that’s produced a ‘head of the class’ movement—be it in the form of cocktails, coffee, or cuisine—in Oregon’s dining scene. Humbly, locals chalk it up to grey weather-induced kitchen wizardry, but it’s more than that.

Still jittery from the coffee, we set our sights on the Southeast Asia-themed Feast Portland Night Market. Twinkling lights strung above, a DJ pumping out tunes, and free-flowing cocktails in every glance, stalls and stalls of restaurants (from Portland to Bangkok) seared and sauteed their take on market fare. True to form, smoky scents carried us abroad as we feasted on fish balls, crispy smoked salmon poofs, and rice noodle-topped palm sugar ice cream doused in coconut milk (served in a plastic bag, obviously). 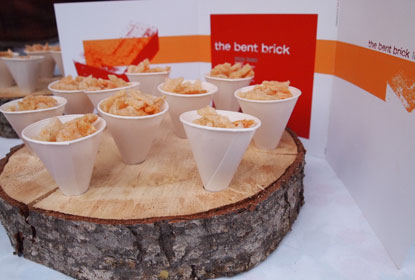 Fittingly, the edible escape ended with a multi-course brunch at the one of Bon Appetit‘s 50 best new restaurants, the Woodsman Tavern. A mimosa in one hand and an oyster in the other, we decided the weekend was as much about tasting and celebrating the region’s superabundance, as it was about learning the tricks of the trade. Though we’ll miss Portland, we’re leaving with an arsenal of coffee, cocktail, and cooking tips to last, well, until next year.

—Tickets for the gastronomic line-up can be purchased as singles (for as as little as $25) or in a package.

—Up to 19 events per day run Thursday to Sunday. For a taste of this year’s events, check out the event schedule.

—Big-name restaurants like Luce—recently named one of the top 10 new restaurants in the US by Bon Appetit—have exclusive Feast-inspired evenings. These sell out quickly, so if you want tickets, you’ll have to be quicker than a Stumptown barista brewing coffee for the Monday morning rush.

All photos by Trish Friesen