News Apeksha Bhateja What Are the Chances You'll Get Monkeypox at a Hotel?
NewsJust Back From: East Africa’s Great Migration 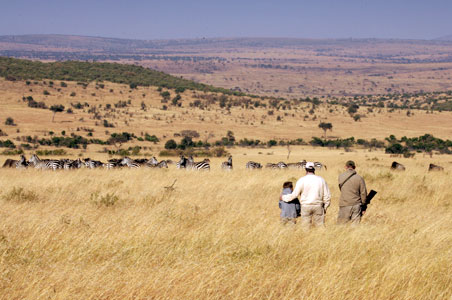 Kenyans call it the seventh wonder of the world: the millions-strong migration of wildebeest, zebra, eland, and gazelle that floods the Masai Mara in late summer and fall, with lions, leopards, and cheetahs in hot and hungry pursuit. What looks like a dance number from The Lion King is actually part of a natural cycle, where herds of grazers from Tanzania‘s Serengeti follow summer rains north across the Mara river to Kenya‘s Masai Mara, joining the enormous density of wildlife that already lives there year-round.

The dramatic climax of the event, between July and September, happens when a million and a half spindly-legged wildebeest gather at the banks of the Mara and cross en masse, their inevitable spills delivering a convenient meal to the crocodiles waiting below. Those that make it across flood the Masai Mara plains in late summer and autumn—making this prime time for a Kenyan safari.

But here’s the rub: the Serengeti-Mara is a big place, 5,700 square miles, and the migration is different every year. No one can predict with certitude exactly where the mega-herds will appear, or when. But it doesn’t mean they don’t try. The phenomenon is handicapped with the same fervor reserved for Florida hurricane season or New England fall colors, with visitors and safari operators poring over satellite images and weather forecasts to guess the herds’ movements. This year, the migration moved north early. In 2009, the Mara river dried up. In short, it’s complicated.

Any Great Migration safari requires equal amounts of luck and Zen; the suspense, and the search, are half the fun. But you can make the most of whatever nature throws at you with these tips, and the sage advice of safari scions Calvin and Louise Cottar, of Cottar’s, the Masai Mara’s oldest safari camp.

Bring another set of eyes. Is that an ostrich or a rhinoceros? From 100 yards, it’s hard to tell. All those close-up photos of yawning lions notwithstanding, much of the wildlife you see is going to be keeping its distance, and the experienced eyes of a professional, KPSGA-certified guide will help find them and bring them into focus. Calvin Cottar recommends splashing out on a two-person team, with a guide and a spotter. Once you’ve found the herd, a good set of binoculars and your very longest camera lens will make the difference between dots in a field and lions on the kill. It’s well worth the few extra pounds in your suitcase. 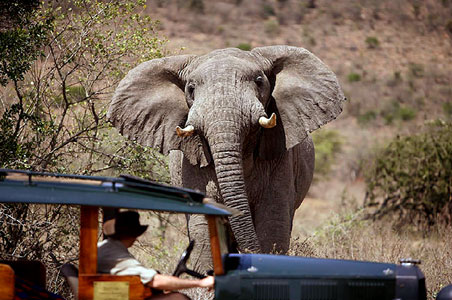 Take your time. Beyond going at the right time of year, the best way to make sure you see a Mara crossing is the obvious one: spend as much time at the river as you can. Calvin Cottar suggests a high vantage point, to monitor multiple crossing points at once. More generally, you’ll get the most out of your safari by spending more of your time in the bush, and less traveling between safari camps. "Don’t rush it," says Louise. "Instead of doing four locations in three days, do two locations in four. Spend the time." A few extra hours at one location can make the difference between an empty savannah and a National Geographic moment.

Get comfortable. Because you’re going to spend a lot of time in that Land Cruiser. Game drives are the number one way to see the show, but after just a few minutes lurching over the savannah in four-wheel drive, you’ll gain a new appreciation for your smooth-paved commute back home. Check out your guide’s car before booking, and bring loose-fitting clothing, blankets for cool mornings, snacks, and drinks. And Calvin Cottar promises: once the show begins, you won’t notice a few bumps in the road. 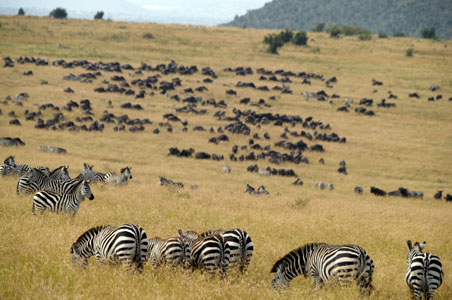 Be patient. You’ll see herds of grazing wildebeest, antelope, and zebras. You’ll see a family of elephants lumbering single-file to a watering hole. You’ll see big cats resting after a kill (well, you might). But, it might take a while. Those life-list thrills are so thrilling exactly because they come after a long wait. While you’re waiting, be open to it all. "It’s not about a checklist," says Louise Cottar. "Leopards are pretty difficult to see sometimes, but you saw an amazing elephant shrew that no one else sees."

Avoid the crowds. Easier said than done, of course. The Masai Mara is Kenya’s number-one tourist destination, and guess what? Everyone’s looking for that shot of the wildebeest herd in the river. But you can still experience the migration as nature intended by eschewing the obvious for the offbeat. "We’re not going to go over there, because maybe right in the distance there’s a whole bunch of minibuses," says Louise. Instead, "we’re going to look this way, we’re going to look for the ‘little five’, or what’s around the hill." Blaze your own trail, and the spectacle of the wild will be yours alone.