Just Back From: Dominica, West Indies

Up until recently, I thought the only thing Richard Branson, Mick Jagger, and Johnny Depp had in common was their star presence. Oh, and the fact they have a lot more money than me. It turns out they’re all fans of Dominica, a small island in the Caribbean. Branson vacationed here with his family last year; Jagger recently visited for several weeks on a solo journey; and Johnny entertained us with Pirates of the Caribbean, which was filmed here. Considering its celebrity touch, Dominica is not like St. Barthes or, ironically, Branson’s private Necker Island. In fact, there’s nothing rich and famous about it. Dominica is completely off the radar, unspoiled and not your typical Caribbean playground. Instead of miles of sandy beaches, there are 365 rivers. Rather than all-inclusive resorts packed with families, there are wonderful, intimate boutiques spread throughout the island. Fancy, celebrity-chef restaurants are nonexistent: expect traditional, home-cooked meals by local chefs. 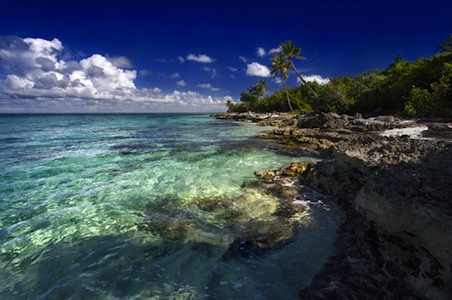 Only 298 square miles, Dominica (the "Nature island") is one of the most sublime destinations I have visited in the Caribbean—and I’ve been to 16 islands here. After arriving, I was whisked away from the simple airport and driven miles along the coast, through Indian reservations still maintained by indigenous locals selling handcrafts along the road. It was interesting to pass through Pigwah Bay where the monstrous, rolling waves lure local surfers (and daring visitors). From my driver, I learned whale watching is a year-round attraction, as sperm and humpback whales reside around these waters. 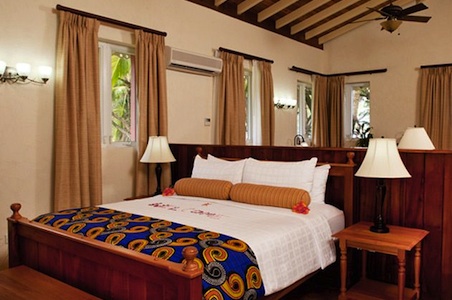 I finally arrived at Rosalie Bay Resort, open only two years and already a favorite for visitors thanks to its intimate 22 acres of river, ocean, and rain forest. The eco-luxury and wellness resort is comprised of 28 spacious, cottage-style accommodations right in the foothills of the Morne Trois Pitons—a UNESCO World Heritage site where the Rosalie River rushes into the Atlantic Ocean. My oceanfront suite had a separate sitting area with daybed, large bathroom with oversized tub, and separate rain shower and wrap-around porch. The view of the ocean through the almond trees was priceless. It’s no wonder Richard Branson chose to bring his family to this particular property. What makes the resort even more special is the saltwater pool (the only of its kind on the island), open-air Zamaan Restaurant that offers a health-minded menu with vegan and gluten-free options, and the brand-new spa opening in January complete with three treatment rooms, hydrotherapy tub, and range of fine treatments.

In the morning, after a complimentary yoga class, I went to discover the island, known for its myriad natural sites. I made a beeline to Emerald Pool, a breathtaking waterfall grotto located right in the rain forest, perfect for a quick dip after the short hike to it. The grotto is a popular stop for cruise ship passengers, so I adjusted my visit accordingly, to soak up the site without a gaggle of other tourists.

Emerald Pool was only a prelude to the mother of all attractions: Champagne Reef. Due to the strong geothermal activity on the island, hot, gaseous bubbles rise from the ocean floor, resembling (you guessed it) a glass of champagne. Snorkeling above these bubbles is like watching something straight out of a Pixar movie. Champagne Reef is unusual and commanding; no wonder it’s the top attraction in all of Dominica. Somehow my arm was twisted to have lunch with Champagne Reef Dive & Snorkel, right at the base of the reef. I didn’t expect a satisfying meal considering I have never had a good meal with a dive company, yet I was pleasantly surprised: my dish featured fresh, grilled yellow-fin tuna, sautéed dasheen, plantain au gratin, stewed pink beans, and vegetable stir-fry. Kudos to the local chef and Champagne Reef for a memorable experience.

Champagne Reef wasn’t the only thing hot and bubbly on the island. Boiling Lake is a sizzling, flooded fumarole at the bottom of a sinkhole. Considering the four-hour hike to get there, the commanding site is quite rewarding. Needless to say, a refreshing dip in the lake is not recommended. You’ll have to wait until after your hike back to take in the natural sulfur springs at Wotten Waven for a completely natural, detoxifying experience.

Hot springs are also a main attraction at Papillote Wilderness Retreat though the garden is its claim to fame. Weaved within the tropical setting are more than 200 species of plants, from breadfruit trees to herbs. Opened in 1965, the resort has only 12 rooms (Mick Jagger took Room 11 for two weeks) and overlooks waterfalls (with an unforgettable sunset view to boot.) Try the coconut rum punch at the bar: you won’t be sorry.

The most atypical excursion for a Caribbean island was my tour on Indian River. It’s one of Dominica’s most scenic with mangroves and scurrying crabs, and one of the most recognized sets for Pirates of the Caribbean: Dead Man’s Chest. My guide, "James Bond," took me on a handmade canoe until we reached a bush bar deep in the rain forest. 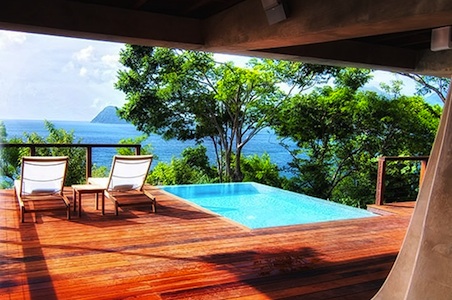 But nothing was quite as removed as Secret Bay, a new resort in Portsmouth with only four contemporary villas and bungalows featuring fully equipped kitchens, a private beach, and utter seclusion. It’s been nearly sold out since it opened in June 2011, so I’ve never had a chance to stay overnight. The manager, however, assured me eight more accommodations were on their way. Thankfully, that’s just enough reason to come back to Dominica.