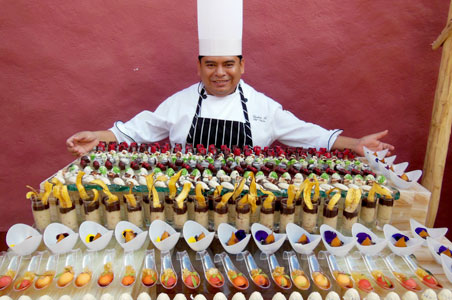 Historically, Playa del Carmen, a beachfront town on Mexico’s Riviera Maya, has been known for its idyllic beaches, proximity to majestic Maya ruins, and upscale version of the raucous party scene in nearby Cancun.

However, Playa, as it’s known, and the Riviera Maya are quickly gaining ground as one of the world’s up-and-coming culinary hotspots. An exploding gastronomic scene buzzes with the glitz of famed chefs such as Enrique Olvera, whose newest restaurant, Maiz de Mar, is set to open on Playa’s bustling La Quinta Avenida, or 5th Avenue, in April, while beloved neighborhood joints, a new food and wine initiatives at local hotels, and a growing interest in Mexican-grown wines also have helped boost its culinary status to unprecedented heights.

It was all on delicious display during the second-annual Cancun-Riviera Maya Wine & Food Festival, which brought in more than 25 star chefs and 50 wineries from around the world. The four-day epicurean extravaganza featured cooking demonstrations and tastings by day and swanky soirees by night, with foodies and culinary stars mingling over exquisite dishes like octopus tostadas and ceviches, plus wines from Mexico and other regions around the world. 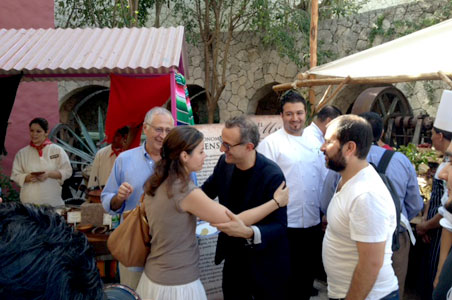 The event kicked off on a festive note at Xcaret, a nature reserve and adventure park. The energy buzzed even more with the arrival of famed Italian chef Massimo Bottura, whose Michelin-starred Osteria Francescana, in Modena, Italy, is consistently ranked among the world’s best restaurants. Along with Olvera, the genial Bottura (pictured above) was a guest of honor, and at Xcaret, he was swarmed by both media and admirers, with whom he snapped photos in between sampling food and drink offerings. 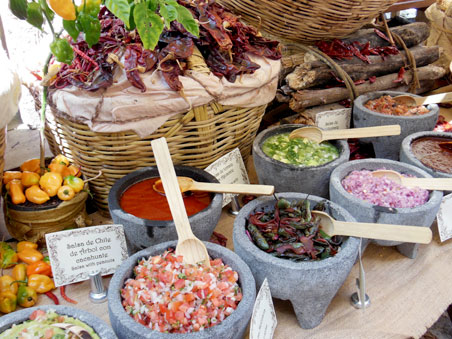 Speaking of which, notable edibles (of which there were many) included handmade corn tortillas complemented with chile-based salsas of all levels of spiciness, from mild to mouth-scorching; Mexican cheeses like cotija and queso anejo; and tostadas with shredded turkey in a charred chile sauce, topped with a quail egg—all superb.

For a sweet finish, I opted for a shot glass of mashed plantains topped with melted chocolate and a fried plantain. I easily could have scarfed down about a dozen. I opted to skip a sweetened pear topped with ants, but did indulge in an insect, a chapuline—the salty, fried grasshopper that’s a beloved snack in Oaxaca. (My verdict? Not bad, but I won’t be replacing popcorn with these tiny toasted critters anytime soon.) 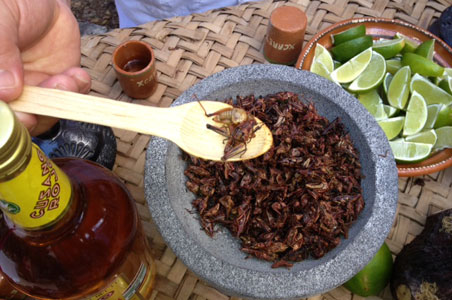 A highlight at Xcaret (that I’ll need to explore during a less-packed schedule), was the park’s underground wine cave. (Yes, underground wine cave.) In stark contrast to aisles of stuffed animals and Mayan-themed souvenirs, this serene subterranean space beckons with sloping stone tunnels that lead to several cellars of Mexican wine. Tastings were sadly not available that day, but I’m thinking that cave is worth a second trip back.

In the days that followed, culinary enthusiasts watched with watering mouths during various cooking demonstrations and interactive events. One of my favorites was with Mexican-born chefs and TV personalities Josefina Santacruz and Aarón Sánchez, who demonstrated how to make dishes of shrimp with garlic-and-chile sauce and a flavorful vegetable-based seafood soup.

Along with their cheerful banter, a seamless blend of English and Spanish, the duo offered plenty of takeaway: Slicing peppers with the outside skin down makes them easier to cut; when cooking garlic, add other ingredients as soon as the garlic becomes fragrant to avoid burning it; and topping soup with a crunchy ingredient like toasted pumpkin seeds adds delightful texture.

Another personal highlight: a tasting of mezcal, the indigenous, but often misunderstood, national spirit of Mexico. Kansas City-based wine and spirits expert Doug Frost, one of just three people in the world to hold both titles of Master Sommelier and Master of Wine, led the session. He practically simmered with passion for mezcal, which he sipped from a wine glass and claimed is "the single most common drink I have on a weekly, if not daily, basis."

The final fiesta featured an "Italy Meets Mexico" theme at the Paradisus Playa del Carmen La Esmeralda, complete with more sipping, savoring, and, by night’s end, partygoers (including yours truly) kicking off their shoes and dancing in the sand. Plans for the 2014 festival, which will be held in Cancun, are already underway, with dates (March 13-16) and some star chefs (including Federico López and Guillermo González Beristain) already announced.

My only recommendation for organizers: Please remove all scales from the rooms of hosting hotel resorts. Whether you step on them or not (and I didn’t dare), they’re a troubling reminder of the damage inflicted during such indulgent days and nights.