Just Back From: Canada’s Coolest Carnival 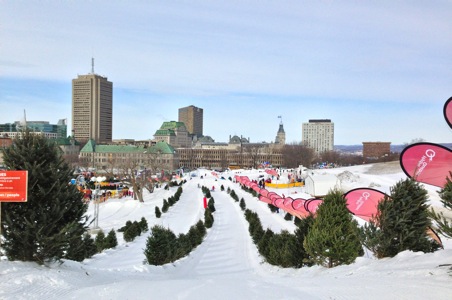 Many miles north of Rio, Canada holds its own version of pre-Lent fun—a celebration so big, it’s become the world’s largest winter carnival. Currently in its 59th year, Carnaval de Quebec started in 1894, took a multi-decade hiatus and went annual in 1955. Since then, the smooth-as-ice celebration has morphed into a grande fête attended by over 650,000 down- and faux-fur-clad party-goers seeking a jolt of French Canadian joie de vivre! 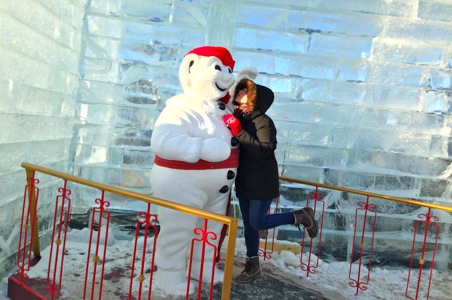 Before we get into the brisk bash’s traditions and events, no talk of Quebec’s Carnival would be complete without mentioning Bonhomme, the celebration’s snowman-come-ambassador. Always sporting a smile, Bonhomme is a Canadian celebrity near Celine Dion fame. Standing seven feet tall and weighing in at 400 pounds (of compact snow, of course), Bonhomme is the star of the snowy stage. Complete with an entourage, ‘photo op’ circuit, his very own ice palace (built by 100 people working for a month), the keys to the city, and a signature move (his high kick), Bonhomme is a treasured bon vivant who tells everyone, including our gal on the ground, that he loves them. 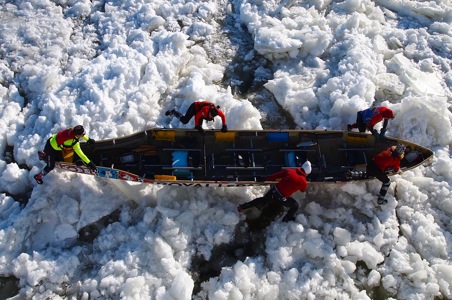 Spanning over 17 days, the glacial gala really heats up on the weekends for the big-draw events, while the day-to-day party plays out on the Plaines d’Abraham. The first weekend kicks off with an outdoor dance party (sans sequins or masks), the second weekend slides in with parades and an ice canoeing race across the St. Lawrence River, and the third weekend is spearheaded by the St-Hubert horse and sleigh derby. Other not-to-miss events are the international snow sculpture competition and LumoCité, a series of four urban light projection sites scattered throughout the centuries-old city.

To keep the festival fully fueled, there’s an indulgent menu of quintessential French Canadian treats. Our first delicacy involved pouring pure maple syrup on a mound of snow and winding it into a "snow taffy" lollypop. After the frosty sugar high, offset the sweet with poutine, a hearty mixture of fries, gravy, and melting cheese curds. The third treat you have to try is what Canadians affectionately call the beaver tail, a thin piece of deep-fried dough dosed in cinnamon and sugar. 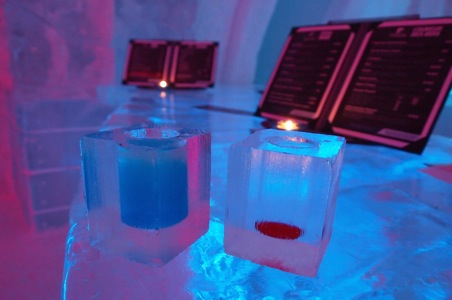 As if this calorie count wasn’t high enough, we washed this all these sweet and salty snacks down with Caribou, a mix of cinnamon-dusted warm red wine, whiskey, and maple syrup. As one of the festival’s biggest unofficial traditions, this hot beverage—think syrupy mulled wine—is served throughout. And here’s where the practice of consuming caribou gets even more curious: there’s an official Bonhomme-topped hollow cane, which polar party-goers fill (and refill) up as they roam the all-ages festivities. Bonus: it comes in handy as a walking stick at the end of the soirée.

Finally, there’s a ton of big and boutique hotels within walking distance of the arctic action, but make sure you make the 15-minute trek outside of town to stay one night in the 32,000 sf Hôtel de Glace. As the name suggests, the 44-room hotel is made exclusively with ice and snow—down to the bed frames and icy cocktail tables in the ice bar—and opens its fur-lined doors during winter’s coldest snap.

– Quebec’s Carnival runs over similar dates each year. This year it takes place February 1 to 17, and next year’s dates have already set: January 31 to February 16.

– The temperatures can get icy cold (in the neighborhood of 14 degrees Fahrenheit), so make sure to bring layers of warm clothes—we’re talking thermals, fleece, snow pants and a down jacket, as well as hand and toe warmers—if you’re prone to shivering.

– Plan to visit over one of the festival’s three weekends to take in the full scope of the subzero revelry.

– Admission to Quebec’s Carnival is $15.

– The Ice Hotel is usually open between January 5th and March 24th (weather permitting) and costs $199 per person, which includes a welcome drink (served in an ice glass, of course), access to the Nordic Spa, breakfast and WiFi. If you’d prefer to peruse the arctic abode without sleeping in a 23-degree Fahrenheit enclave, daily tours are $17.50 per person.