Just Back From: Calgary Stampede

Canada loves cowboys; so much so that every July, the world’s richest outdoor rodeo on the planet takes place in Calgary, Alberta. We giddied up and lived to tell the tale. 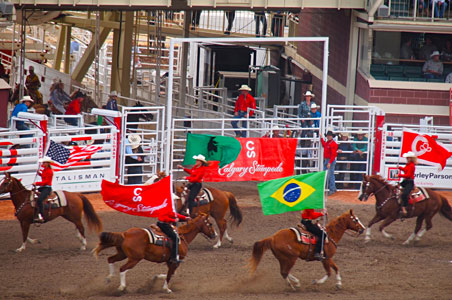 Canada loves cowboys; so much so that every July, the world’s richest outdoor rodeo on the planet takes place in Calgary, Alberta. The Calgary Stampede is an invite-only competition drawing the best in the West and beyond (as far as Australia) to compete for a slice of the $2 million purse. Legendary in Canada and the cowboy circuit, we galloped into town to see how Canadians do the rodeo.

This year’s Stampede story starts with a storm. Just 14 days before what’s dubbed as "The Greatest Outdoor Show on Earth" took the stage, most of Southern Alberta, including the Stampede’s 407 urban acres, got pelted with rain and gallons of river runoff. Flooding ensued. So did the sink or swim mentality that’s enabled the show to reach its 101st year.

Come hell or high water, Calgary chose to swim at a Michael Phelps pace to rebuild and repair the soggy stage and venues surrounding the infield. Working around the clock, crews hauled 88 million pounds of soil off the track, mended the five foot-deep holes where the water had breached, and re-soiled in a TV-style makeover. Elsewhere, industrial dryers sent gale force winds into every water-logged locale. On July 5th, 2013 the Stampede started sans moisture. 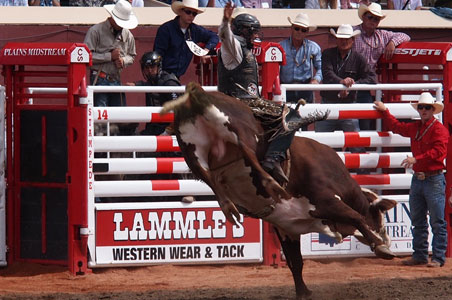 Over the rodeo’s 10-day stint, competitions ranging from ladies barrel racing and bull riding to saddle bronc and chuckwagons sprints work up to the anticipated finals, but the near-miraculous clean-up conjured a celebration on day one. The Stampede had already achieved so much.

It’s a Stampede tradition that pancakes—more than one million of them!—are served out of chuchwagons during the extravaganza. What’s more, they’re free and plentiful, all we had to do was flip a coin to find a flapjack. Unable to resist the pancake pull, we found an extra special version with bacon baked into the center. Yum. Cooked to perfection in case you’re wondering. And from here on out, the feasting didn’t stop, as we found fair specials like deep-fried Oreos, deep-fried Doritos, and Dole Whip, occasionally curbing our fondness for all things fried with a shooter of pickle juice. 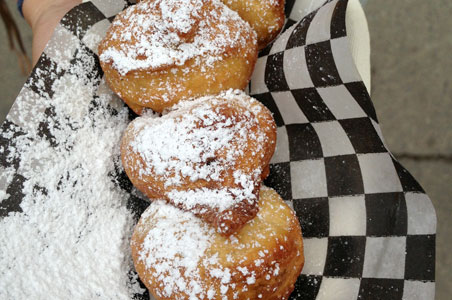 Logic states that stuffing your face and Ferris wheels don’t go well together, so we moseyed over to the Lammle’s outpost, a local western shop, to top it, belt it, and stomp it. Cowboy-ed up like a rodeo contender—townie or tourist, everyone comes dressed in western duds—all we had to was follow the crowd moseying on over to Nashville North. Two-stepping to country songs with a brood of willing partners, we came to the conclusion that dancing in the daylight (and moonlight) is something we could get accustomed to.

Know Before You Go 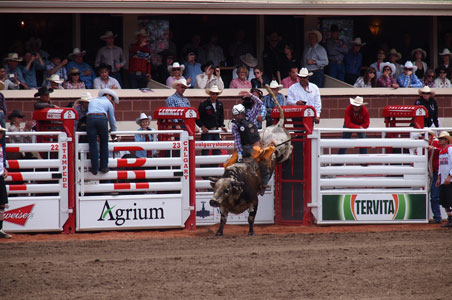 2. There are multiple value days offering free park admission to families or kids; check the Stampede website ahead of time for details.

4. Advanced rodeo tickets, which includes a park pass, start at $38 for adults. Tickets can also be purchased day-of at the park (if you decide to go at the last-minute).