News Apeksha Bhateja Have $340,000 and Want to Vacation in a Survivalist's Paradise?
NewsJust Back From: Babymoon in the Bahamas

Just Back From: Babymoon in the Bahamas 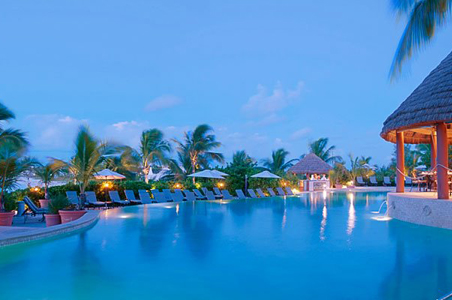 A few weeks ago, my wife was reaching the end of her second trimester of pregnancy and the time seemed right for one last vacation before beginning our adventures in parenthood. I’m told this sort of trip is called a babymoon. For us it was simply a quest for beach chairs and sunshine. So when the opportunity presented itself to spend three nights at the Grand Isle Resort & Spa on Great Exuma Island in the Bahamas, we jumped on it.

"Can we be lazy while we’re there?" my wife asked me.

Let me explain. Getting away for us usually involves strapping skis or kayaks to the roof of our car. Our phones are brimming with apps that guarantee we won’t miss the most authentic local restaurants. We adore a well-planned itinerary. This would be our first foray into doing absolutely nothing.

Customs at the Great Exuma airport consisted of three desks, two officers, and one cool cat playing jaunty island tunes on a keyboard. A promising sign. Things were relaxed here. There would be no steely-eyed official asking us if we were smuggling contraband fruit in our bloomers. "Where’s all your stuff?" was the only question we faced as we strolled through with our two carry-ons.

Dimitri, our gregarious cab driver, asked a similar question as he ferried us along, reggae blaring. It was understandable. Our destination was a place where people stay for a while. Grand Isle Resort & Spa is a collection of well-appointed villas with multiple bedrooms, modern kitchens, and expansive views of the beach, ocean, and a golf course. Families arrive with clubs, fishing poles, and ample groceries. Not us. The only extravagance I packed was an extra pair of underwear, in case, heaven forbid, a cancelled flight left us "stranded" there for an extra day. My commitment to absolutely nothing was strong.

After lazing around our spacious villa (which had more square footage than our apartment), we lazed around the infinity pool, eating chicken wings with jerk seasoning. We read novels as afternoon tumbled into evening and by the time we were sampling the local lobster and grouper at the on-site, open-air Palapa Grill, we realized that our vacation was going as planned. We rewarded ourselves with a walk on the beach.

There was a bonfire on the beach and one of the resort’s employees was entertaining a small crowd in front of it. He was explaining the music and traditions of Junkanoo, a Bahamian street parade not unlike Mardi Gras or Carnival. As he played a goombay drum, he handed out cowbells and maracas crafted from soda bottles and pebbles. Before I had a chance to object, I was part of the band. My sleepy wife looked across the fire at me as I struggled to keep the beat and I knew what she was thinking: Looks like you’re doing something.

I nodded, handed my maraca to a very appreciative little boy, and we escaped to our villa for a long and deep slumber. 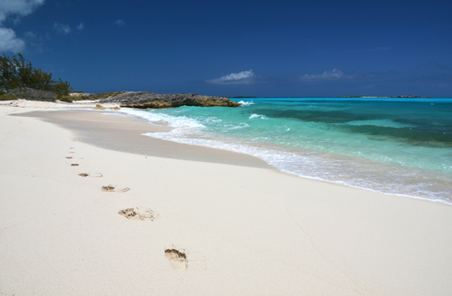 We would sit by the ocean. That was the extent of our plans for our second day. After a leisurely breakfast, we staked out two nicely shaded chairs on the crescent-shaped Emerald Bay Beach and stared out at the blue water that inspired its name.

I tried to stay true to my word, slowly shuffling through the sand and surf and nodding good morning to guests at the adjacent Sandals resort. But the beach was longer than I expected and soon the sweat started surfacing and my feet started to sting. When I returned to my chair, it was twenty-five minutes later, I was drenched, and my bare toes were sprouting blisters.

Feeling punished for pushing it too hard, I decided to calm things down. A splash in the pool followed by a perusal of the New York Times and then a dip in the ocean did the trick. I was back on task. But with lunch looming, we found ourselves slipping into old habits.

"Maybe we should explore, get a bite in town," my wife suggested. "Or have a taxi take us to the grocery store and we can cook in our villa."

It was a harmless enough suggestion, so we asked the concierge what we might find in the Exuma’s largest town of Georgetown, with a population of no more than a couple thousand residents.

"Not much," she told us. "Government buildings, a straw market, a couple of restaurants, and a dock."

"How much to get there?" we asked.

"One hundred dollars round-trip by cab."

That settled it. We were staying put.

"Maybe we can get food at Sandals," I suggested. The two resorts were connected by the beach and Sandals’ Greg Norman-designed championship Emerald Reef Golf Club, and since a villa at Grand Isle comes with complimentary use of a golf cart, we could visit our neighbors in style.

So we hopped in our cart and took the long route, exploring the seaside course and the bordering marina. There were a few folks out on the links, which, even to non-golfers like us, looked gorgeous and challenging with narrow fairways and cliff-perched greens. As we passed a slightly sunburned couple, the man asked, "How many balls have you lost today?"

The woman let out a carefree sigh. "We’ve lost about seventeen," she said. "All in the ocean."

"It’s like a video game golf course on the Wii," the man added, shaking his head and smiling. We wished them good luck and were on our way.

When we arrived, hungry for lunch, at the main entrance to Sandals, the gatekeeper put up a hand. "If you’re not staying here, you have to pay a day-use fee to dine at our restaurants," he informed us.

"Okay," I said, reaching for my wallet.

We hightailed it back to Grand Isle for sandwiches and one of their signature Exuma Blue cocktails for me, a virgin frozen lemonade for my wife.

The wind started kicking up and that meant we wouldn’t be kayaking, paddle boarding, or snorkeling that afternoon. Was this place conspiring against us or was it helping us achieve our goal of absolutely nothing? We decided not to fight it, and returned to our beach chairs.

We slept in. We ate breakfast on our balcony. We sat by the ocean, by the pool. We swam. We read. We walked hand in hand on the beach.

That night we had our final meal at the Palapa Grill and toasted our success. "Even though we almost failed a few times, we managed to be lazy," my wife said.

"I really enjoyed it," I said. "Mostly because we might not have this opportunity again for a while."

That night, as I faded off to sleep, I imagined what I would say to the customs official when we returned to the United States the next morning.

"Anything to declare?" the official would ask.

And I would hold my hands out and proudly proclaim, "Absolutely nothing!"

Wishful thinking. I just remembered something. We had bought some rum cake.