Just Back from Greenland 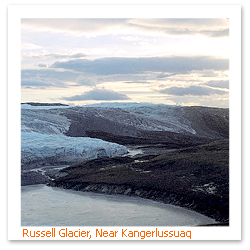 When flying into Greenland at night, you see no lights, only dark, mysterious, finger-like mountainous ridges that creep out into the ocean — or is that ice? You descend into this great darkness and into a land far away from your experience; a place more akin to landscapes in your dreams than any place you’ve been. Then you touch down on an enormous runway. You take your first steps on Greenland on the tarmac in Kangerlussuaq, and the airport’s lights are supremely comforting.

From afar, Greenland is mysterious, a land of secrets. And yet, Greenland is only a four-hour plane ride from Baltimore-Washington International airport (BWI). Twice a week, between May and September, Air Greenland will fly the first direct commercial route from the United States to Greenland. (You can always fly through Copenhagen.) There are no roads in Greenland beyond town limits, so travel between destinations, unless you take a “dog sledge,” is by air.

Opportunities abound in Greenland for ice climbing and caving, rugged mountain biking, backcountry hiking, kayaking, helio-skiing, cross-country and downhill skiing. But Greenland is equally rewarding to less “active” travelers who just want to spend an easygoing week in a seaside town, enjoying good coffee and food, seeing the sights, strolling about the town and befriending the locals. The most “outpost of the world” town you’ll likely visit is the one you fly into — Kangerlussuaq, one of the few Greenland towns not on the coast. It’s the only runway in Greenland that accommodates large jets. (Air Greenland will fly a 757 and an Airbus 320 from BWI.) 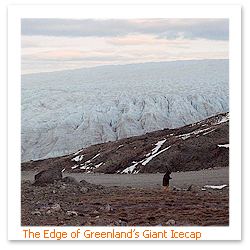 Mountains in the sea

Greenlanders say that Kangerlussuaq is not “the real Greenland,” but it’s worth exploring, especially for hikers. It’s an area of desolate beauty, and fans of the sculpted landscapes of the American Southwest will be particularly awed, especially by Russell Glacier. In summer, a large river rushes from the glacier through the town. Come autumn, the river freezes and sand and ice become one, making the sand, shaped in waves, as hard as rock. Spectacular lakes are just beyond the town. But even the lakes pale by comparison to the giant ice cap.

A road leads to the ice cap, 1,570 miles long and 680 miles at its fattest. It covers 80 percent of Greenland and houses 20 percent of the world’s fresh water. In some places, the ice is over a mile deep. It’s as if a turbulent ocean had frozen. Standing on the cap and looking out upon a horizon of ice is an intense experience, and not just because of the refrigerated wind.

One of Greenland’s most beautiful towns is Ilulissat, where you can take a boat out to the icebergs, which are among the world’s largest — a single iceberg contains enough fresh water to supply New York City for two months. But no cubic measurement aptly describes the experience of seeing these mountains in the sea. Some are like giant pyramids and others are massive rectangles. All are shaped with intricate and magical details of ice and hues of blue. 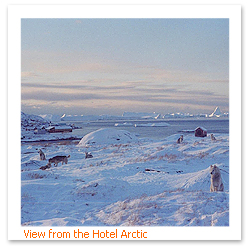 Sisimiut, Greenland’s second-largest city (pop. 6,000), is a harbor town just above the Arctic Circle. Behind the town, beneath Sisimiut’s “bitch’s hat” mountain (it looks like a witch’s hat but this is the literal translation), is the starting point for the three-day 160-km Arctic Circle Race, the self described “hardest ski race in the world.” If skiing isn’t your thing, there is plenty of good hiking — just go to the edge of town and begin! Or take a boat tour of the smaller coastal villages. As in most Greenlandic towns, there’s a beautiful old wooden church. But unlike most Greenlandic towns, there’s also a very good Chinese restaurant.

Greenland’s capital, Nuuk, the country’s largest city (pop. 15,000), is also its most modern city. It has Greenland’s only two stoplights, and as one embarrassed Greenlander told me, Nuuk even has traffic jams. But Nuuk is the seat of government, and it has a fancy new cultural center. The University is here, so this is where “the young people flock to.” There are also two excellent museums, the Art Museum and the National Museum, where the famous “Greenlandic mummies” are preserved.

Nuuk is on a beautiful and rugged coast. Gnarled mountains and dark rock formations meet the ocean. Nearby, you can visit the ruins of Viking settlements, long ago abandoned. In summer, the bay is a playground for humpback whales.

Most of the 55,000 Greenlanders are Inuit, with Danish genes thrown in, or of Danish decent with some Inuit thrown in. As one Greenlander explained her “Danish” eyes, “Yep, there always seems to be at least one missionary in the family tree!” An estimated 10,000 Greenlanders live in Copenhagen, which, until the university in Nuuk was established, was the only place a Greenlander could go for a college education. 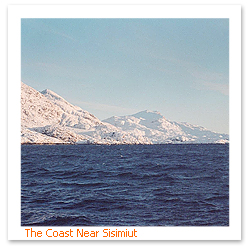 Greenland was colonized by Denmark in the 1700s and remains part of the kingdom of Denmark. Two-thirds of its government budget comes from Denmark and the military and judicial system are still under Danish rule — there are no prisons in Greenland. If you have to do time, you do it in Denmark.

The primary language is Greenlandic, followed closely by Danish, and then way behind is English (hotel staffs and tour guides know English). Greenlandic is the same language spoken by the Inuits of Canada and Alaska, with the inevitable dialects. It is a beautiful language, particularly when sung, but it’s not easy to pick up. A few learned phrases or words will endear you to your hosts. During the 1950s and ’60s, Danish was pushed hard as the country’s language and Greenlandic was banned from schools, but it became the official language when Greenland established Home Rule in 1979.

Greenlanders like coffee and you’ll be glad to know it’s very good here. A break in the day is always accompanied by coffee and cookies. Downtime with Greenlanders over a cup of coffee turns your trip from passing through to staying a while, and it is nice to be welcomed as a guest. The country that began as a journey into the unknown becomes as comfortable as a home. 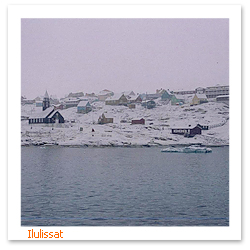 Weather: In summer, temperatures reach into the 50s and 60s in the Southwest. Bring a coat and expect 24 hours of daylight. In the dead of winter, from late November to late January, there is little if any sunlight, and even in the “balmier” regions most days will be below 0 degrees F.
Currency: Danish Krone (DKr)
Lodging: Hotels range from about $100 to $250 a night. Hostels range from about $55 to $95 for a private room.
Airline: Round-trip flights on Air Greenland are $1,100. Check out airgreenland.com to book flights and view package tours.

Resources
greenland-travel.com and greenland.com are great for lodging, tours, and guide information; greenland-guide.gl has the scoop on tour operators and tours, and southgreenland.gl is devoted to tourism on the bottom tip of Greenland.