José Andrés is a busy man. When he’s not opening restaurants, writing books, or guest lecturing at the prestigious Harvard University, you can find the affable chef spending time with his wife and three daughters at his home just outside of D.C. Fodor’s recently caught up with Andrés and got the inside scoop on his favorite places to take the kids when eating and sightseeing in the nation’s capital. 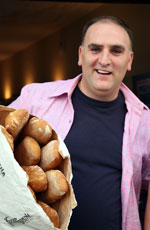 Fodor’s: What are some of your favorite local restaurants to take your kids?

José Andrés: 2 Amy’s Pizza has great Margheritas with mozzarella and tomatoes imported from Italy. My daughters love the burgers at Palena . It’s a very fancy restaurant but they have this informal café, with four or six tables in the front. They also love sushi. We don’t go to just one place, but they like Kaz Sushi and Sushi-Ko.

Fodor’s: There’s so many great attractions in D.C. and many of them are free, how do you decide which ones to visit with your kids?

Andrés: They like to go to the museums. There’s so many of them but we may go to the National Air and Space Museum, which is very cool. I think Washington as a cultural city is very undervalued; you get so much for how little it costs you. The new Newseum is awesome because there you can be a news anchor for a day. The Hirshorn is a great museum. It’s not like we go to the same one every month but those are some of the ones. In Bethesda there’s a very cool Imagination Stage. It’s in Bethesda, and anyone visiting D.C. should know it’s only a subway ride away from downtown. They always have amazing plays. It’s a full theater exclusively for kids; they don’t have that in many places. 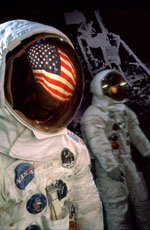 Fodor’s: When you’re visiting National Mall museums, where do you go for lunch?

Andrés: On the Mall there’s plenty of the restaurants to go to on the right and left. And lately we have some food trucks coming to D.C. like the Red Hook Lobster Truck. My daughters like those lobster rolls. You have to go on the web and check where they are and they’re never in the same place, but they’re very good. The good thing about trucks is that they can get to places that no one else can go, so it serves that public purpose.

Fodor’s: What are the best family-friendly stops on Capitol Hill?

Andrés: It’s always good to know what they’re doing at The Library of Congress. It’s not kid-friendly all the time but there are things for kids sometimes, so it’s good to check the web. But if you’re going to Capitol Hill, you can get a good burger by Spike Mendolsohn at Good Stuff Eatery. It’s great. His mother is there—it’s a family affair. He’s bringing new life to that part of town. 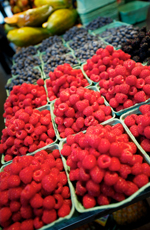 Fodor’s: How about good spots for kids on Dupont Circle?

Andrés: I would recommend the farmer’s market in Dupont. To me that’s very important because every meal of my first two children; every single purée that they ate when they were one or two years old, came from that market. It’s the place to be and it’s good to go and hang around and you can try some crab cakes, or buy some flowers, or some tomatoes, or some apples or ice cream on a Sunday morning between 9 and 1.

Fodor’s: Are there any day trips from D.C. that you’d recommend for families?

Andrés: If you have a car, you should go to Great Falls, especially when the snow melts in the springtime. Great Falls is just a 20-minute drive from the city, but you feel like you’re in the middle of the national forest.

About the Chef: José Andrés most recent book is Made in Spain: Spanish Dishes for the American Kitchen. He is the award-winning chef and owner of ThinkFoodGroup, a collection of restaurants including Zaytinya, Oyamel, Jaleo, Café Atlantico, minibar by José Andrés, and the Los Angeles-based hotspot The Bazaar by José Andrés in the SLS Hotel at Beverly Hills. This past December, Andrés added two more restaurants to his roster, with the opening of Jaleo and China Poblano in the new Cosmopolitan hotel in Las Vegas.