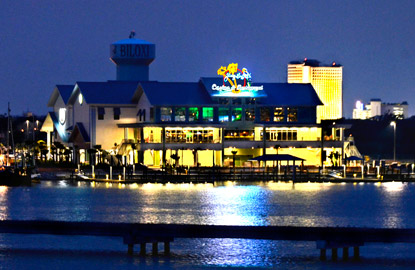 Good news, Biloxi! You too can waste away to the dulcet tones of Mr. Jimmy Buffett. With the opening of the Margaritaville Casino and Restaurant in Mississippi this week, Mr. Buffett, a native of the state, expands his casino empire to two, and brings a taste of Las Vegas to the Gulf Coast.

Margaritaville is on the smaller side for casinos, featuring 18 table games with classics like roulette, blackjack and craps, 820 slot machines, and three restaurants. The Feeding Frenzy Buffet offers low prices and each day serves up one of Buffett’s favorite meals. The Margaritaville Restaurant seats 400 including balcony tables which overlook the Marina, and features live music and "specialty entertainment" during the latter half of the week. The Marina is a floating party, and includes docks for your boat, "mobile food units," live entertainment, and a full bar specializing in, you got it, margaritas.

In a statement made before the Mississippi Gaming Commission on May 17 and reported by the Sun Herald, Buffett said that the casino had brought 1,000 jobs to the area, though 4,000 people had reportedly turned out at a job fair to apply.

With tourism in Mississippi trending upwards (total estimated visitors to the state was up 6.7% in 2011 over the previous year), it remains to be seen how big a piece of the pie, or gulp of the margarita, Buffett’s latest venture takes in the coming year.