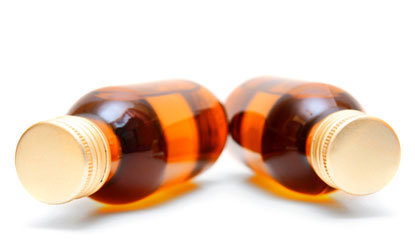 They say (miniature) crime doesn’t pay, and they might be right. On Wednesday, eighteen workers at JFK airport in New York City were charged in connection with the pilfering of over 100,000 miniature bottles of liquor and other duty-free goods, the Wall Street Journal reports. It’s a crime of tiny proportions.

In a press conference on Wednesday, Queens District Attorney Richard Brown stated that over the last five months, 15 truck drivers used by Sky Chef, the subcontractor for American Airlines’ food service, and three airport security guards participated in the theft of, well, a whole lot of mini liquor bottles, cigarette cartons and perfumes. The guards allegedly took bribes from the drivers, who, again allegedly, smuggled the bottles home. The total cost of the goods: $750,000.

As part of the undercover sting operation, hilariously named "Operation Last Call," investigators discovered that the miniature contraband was being sold in a "local underground economy." According to the district attorney, the booze was sold for between $.55 and $1.25 per bottle on the black market. Perhaps the most infuriating part of the scandal is that, according to the D.A. (and my own experience), each of these bottles can be sold on the plane for up to $7.00. Maybe the real crime here is the markup.

According to Brown, "employee pilferage is a significant problem for many companies, not just at the airports but throughout the entire metropolitan area," and the results of the lost goods is usually higher cost for the consumer. Brown also cited the dangerous behavior of the guards in accepting bribes in an age of airline terrorism.